A private plane crashes in the woods, leaving its passengers stranded for a little over a year and a half. That’s the basic premise for Yellowjackets. A more detailed one would be that it’s Lord of the Flies, but with girls. It’s a little bit Alive. And the plane crash bits are set in the 90s, accompanied by a soundtrack that sounds like it came from one of my old mixtapes. It has the teen girl dramatics of Dare Me, along with the hints at violence of…Dare Me. In other words, it is absolutely Salome Bait. 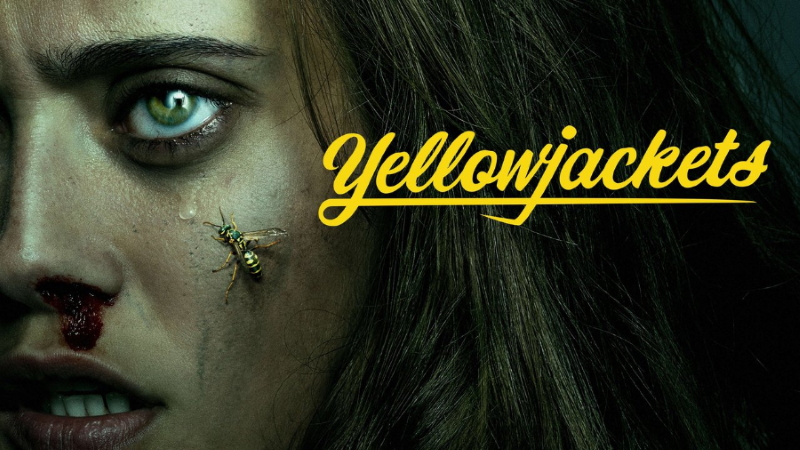 I mean, as soon as it starts with the girl running and the weird masks, I was like, And then what??? But of course, they don’t tell us that yet. This is the pilot and it’s for introducing us to the characters and the story.

We’re getting two for the price of one on both those counts, by the way. We’re going to see the story as it unfolded way back in 1996, but we’re also checking in on those characters now. As you might imagine, crash-landing in the wilderness and devolving into cannibal cults didn’t exactly produce upstanding, well-adjusted adults. Sure, some of them may play at it, but you need only dig a little deeper to find the rotten cores. 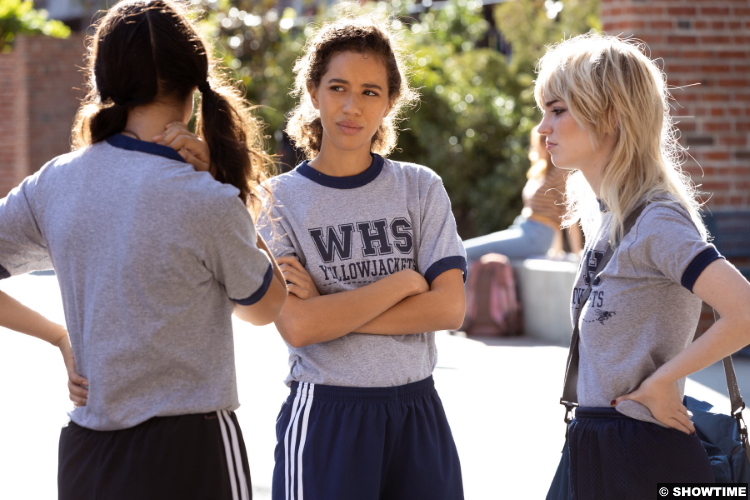 Since this is basically an introductory episode, I think I’ll go with that format, too. First, you should know that in 1996, the main girls are high school seniors. They’re all members of the champion soccer (football) team. (Yes, this is another similarity to Alive.) There’s Jackie (Ella Purnell), for instance. She’s best friends with Shauna (Sophie Nélisse). She doesn’t know, though, that her boyfriend Jeff (Jack DePew) and Shauna are secretly hooking up.

There’s also Taissa (Jasmin Savoy Brown), Natalie (Sophie Thatcher), Lottie (Courtney Eaton), Vanessa (Liv Hewson), and Misty (Sammi Hanratty). Obviously, this isn’t the entire team, but these are the characters with whom we’re going to be spending the majority of our time. And Misty’s not actually on the team, by the way–she’s the equipment manager. She’s also kind of a weirdo, and not in a seemingly good way, like Natalie, even before the crash.

In fact, some of the other girls are also showing some red flags–no soccer pun intended–before they even get on the plane. Taissa, for example, is very aggressive toward a freshman player, Allie (Pearl Amanda Dickson). She thinks Allie isn’t playing well enough, so she suggests icing her out on the field. Somehow, that ends in Allie with a broken leg. Shauna believes it was intentional, and that causes tension between the girls. 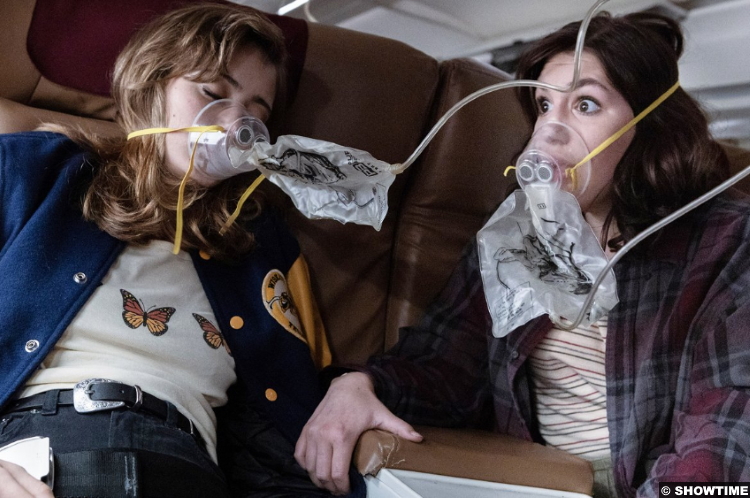 That tension is seemingly forgotten as they board that fateful flight, though. We don’t get much of the crash story at this point, however. We know that they get on and then Jackie and Shauna each pop a Valium. Shauna wakes up to terror, as someone is putting an oxygen mask on her face. She turns to the window and all she can see is trees, coming fast.

We do get little bits of the aftermath in the woods interspersed with the flashbacks and forwards. What little we see is disturbing, though. As I mentioned, we see the girls in masks. They apparently trap and kill one of their own. And then they eat her? I’m pretty sure that’s the implication, but I wouldn’t testify to it in court. 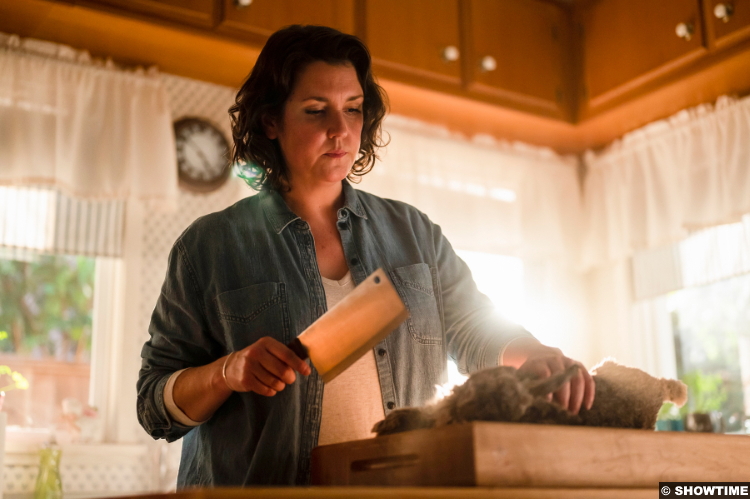 Anyway, let’s move on to adulthood. Jessica Roberts (Rekha Sharma), a reporter, doorsteps Shauna (Melanie Lynskey). She wants Shauna to tell the “real” story of what happened in those woods. She even dangles a 7-figure book deal. But Shauna clearly has no desire to talk about it. Later, she’ll confirm that the girls made a pact about it, in which they agreed to tell as little as possible.

One of the other parts of that pact was to stay out of the public eye, lest they provoke curiosity about their harrowing tale. Taissa (Tawny Cypress), however, has discarded that, as she’s now running for office. But at least she seems to be stable, which is more than you can say for the others. 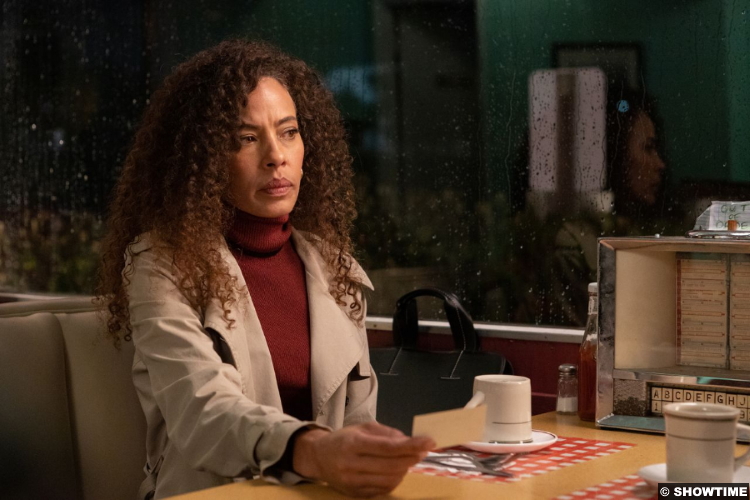 Misty (Christina Ricci), for instance, is now a nurse. But she’s not one of those people who went into the field out of a drive to help others, though. She seems more akin to an angel of death, one of those people in the medical field who kills their patients (on purpose). We don’t actually see her do this, mind you, but I would not put it past her. She very much has the vibe. 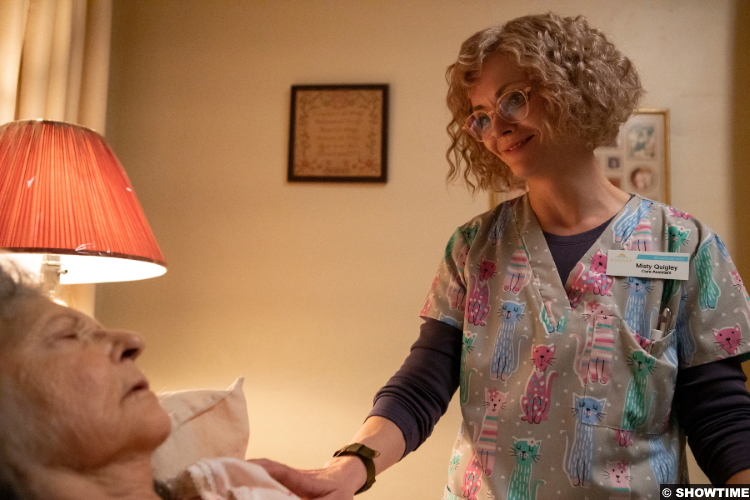 Adult Shauna isn’t that messed up, but she’s not all well, either. She’s now married to Jeff (Warren Kole), by the way. And she seems desperate for a relationship with their teenage daughter, but I’m not sure it’s a maternal one she wants. My dime store analysis, based solely on her introductory scene, in which she’s jerkin’ it to a picture of the daughter’s boyfriend, is that she wants a teenage do-over.

But who wouldn’t if they had gone through something like that? The thing is, though, we don’t know what that something is yet. But it was something bad, and it left a mark deep enough that Natalie (Juliette Lewis), fresh out of rehab, is compelled to start coming after the rest of the women. So what went on in those woods?

9/10 – Boy, I don’t know, but I’m excited to find out. As I said, this is mostly a getting-to-know-everyone episode, and now that I know them, I want to know everything else.

Yellowjackets is currently airing in the US on Showtime. It will begin airing in the UK on Sky Atlantic on December 2. It also appears the UK premiere will be a double episode.