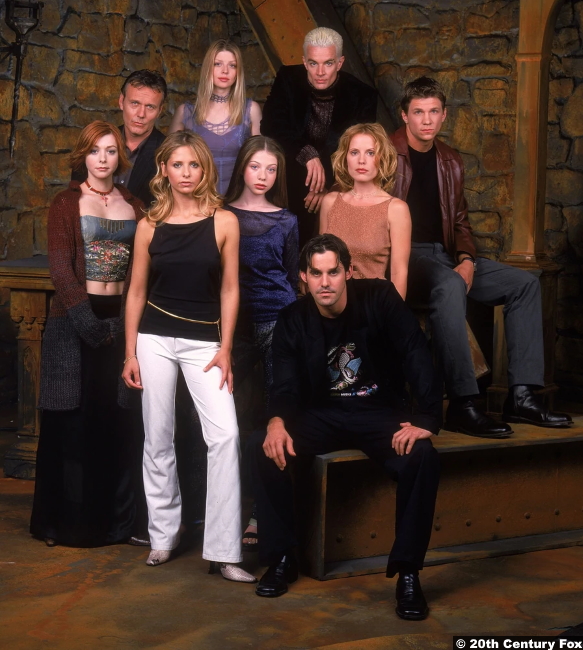 Season five begins with an episode that feels like the start of something, only for it to end up a punchline. That’s a common criticism of the Joss Whedon school of writing, that he always undercuts his dramatic or important moments with a gag or a quip. I get it, and you can certainly cite many examples of it, but it’s not entirely fair to cast this as his big sin as a writer. There are scores of episodes that let the dramatic moments play out without any levity: Buffy’s “I don’t want to die” speech in the season one finale, her killing Angel at the end of season two, or her beautiful recognition at the Prom in season three, just to name a few. The reason many complain that Joss never lets a sad or special moment breathe is because many of the moments that fans expect to be sadder or more important simply aren’t that important to the writer in charge. In episode one this year, Buffy faces off against the most famous vampire of them all: Dracula. The episode’s title is the perfectly succinct “Buffy vs. Dracula.” You expect fireworks. You expect this to kick off a multi-episode arc. You might even think the big man himself will be the big bad of the whole season.

Instead, she dusts him in a one-off episode.

Granted, Dracula comes back (he can’t be dusted like the rest of the vamps)…but Buffy just waits there so she can stab him again, etc. It’s a gag and it does not matter at all. If you thought this was the beginning of something remarkable, well…maybe stop worrying about the show being what you want it to be and just let it be what it is. Season five doesn’t begin with the introduction of the big bad (actually, it does, we just don’t realize it yet). It begins with a lot of fun as Buffy proves she’s at the top of her game by taking down the most famous vampire of them all. She’s at the top, which means the only thing to do is knock her down. And that’s what this season does: It strips away Buffy’s sense of her own heroism.

To this point, Buffy has saved the day many times over by using her brains and brawn, whether it’s taking down a monster “that cannot be killed with sword or stake” by blowing it up with a rocket launcher, or running her lover through with a sword to stop the apocalypse, Buffy will do what it takes to get the “win,” and thus far she’s got a pretty great record of wins notched on her belt. So what happens when you give her a challenge she can’t “beat”? What happens when she’s forced to accept that sometimes you can’t win every fight, and she has to choose between failure as a fighter, or success as a sacrifice?

That sacrifice is centered around a new character to the Buffy universe: Dawn. Reviled at first, only to grow as a character and end the series as a vital component, Dawn is introduced to us here, first as an enigma. The writers were certainly not the first to tackle bringing in a new character to a well-established show, but in this case, instead of finding some contrived “uncle Billy is moving in with us” or “cousin Freddie is moving into town and will, conveniently, be hanging around our house from now on” way of handling the changeup, the writers of Buffy worked out an in-universe solution: Wizard monks did it. 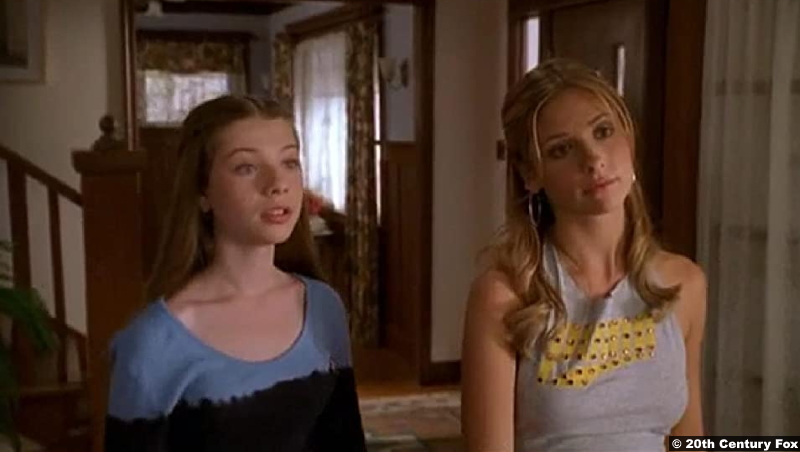 Instead of making Dawn’s role in the season an appendage that fans would either love or hate, Joss and his writers made her the lynchpin of the season’s entire arc. She is “the key” that the big bad of year five is after to unlock the portal to her dimension (that, upon opening, will unleash hell on earth). Once upon a time, this “key” was nothing more than a ball of energy. Desperate to keep it out of the hands of the big bad, the monks took that ball of energy and formed it into a person, then altered the entire fabric of reality and placed her in the Summers home, leading Buffy and her mother (and everyone else, including Dawn) to believe that she is Buffy’s little sister who has been a part of their lives…from the beginning. Early in the season, no one questions Dawn’s placement: Buffy groans about her kid sister. Xander acts as a surrogate big brother. Willow and Tara (especially Tara) offer the kind of sweet “big sisterly love” that Buffy takes for granted. And Joyce, the mother, acts exactly like the loving (if a bit overprotective) mother she’s always been. The writing is so underappreciated here in how well they slid the Dawn character in so that everyone acts as though she’s always been around. It’s only the audience that is left in the dark, with some feeling gaslighted, wondering about past episodes, trying to recall if there was any mention of Dawn before now, if she was talked about but never seen.

Indeed she was talked about, but only in the form of prophecy. In fact, two years before the season five finale, Buffy has a prophetic dream that involves Faith mentioning “little miss Muffet” and a countdown to the big “7-3-0.” Understanding the latter informs us of the former: There were exactly 730 days from the end of season three to the end of season five, and already Joss Whedon had in his mind that year five, should he get one, would end with Buffy sacrificing herself to save a little sister she didn’t even know she had. How the season gets to that point, however, revolves around two things…

As said previously, Buffy’s seasons are always about an internal and an external driving force:

Every Buffy season explores a key aspect of life and maturity befitting the title character’s age and development. In season one, Buffy tackles her calling. In season two, it’s her first love. In season three, it’s the end of childhood. In season four, it’s the awkward transition between being immature and mature. In season five, it’s the grim realities of adulthood.

The internal struggle this year, about dealing with the realities of adulthood, is tackled, outwardly, through the challenges posed by the season’s big bad. And who is this big bad? Let’s take a moment to appreciate the prior big bad villains of the show thus far.

In season one, Buffy faced off against a Nosferatu-looking vampire with a hard-on for killing her: The Master was the perfect, most quintessential, “first boss” for our heroine to conquer, especially in a year whose internal theme revolved around her answering the call of her heroic destiny. In season two, she had to take on her lover, laying the drama on thick and perfectly tying in with the internal theme of dealing with the drama of your first serious love interest. In season three, as the heroine prepared to graduate from high school and take her first steps into the wider world, it’s fitting that she would have to take down a demon in the guise of a mild-mannered, even affable, “guy in a business suit” that secretly is the worst. In season four, as she tackled the transition to maturity, she had to take down the Government itself, and the inept way the bureaucrats tried to do Buffy’s job (and screwed it all up)…which is exactly the kind of persistent nuisance that will plague adults for the rest of their lives but which a child would have no concept of.

So, in season five, with the realities of adulthood and the certainty that you can’t win-em-all hanging over her, who better to embody that challenge than… 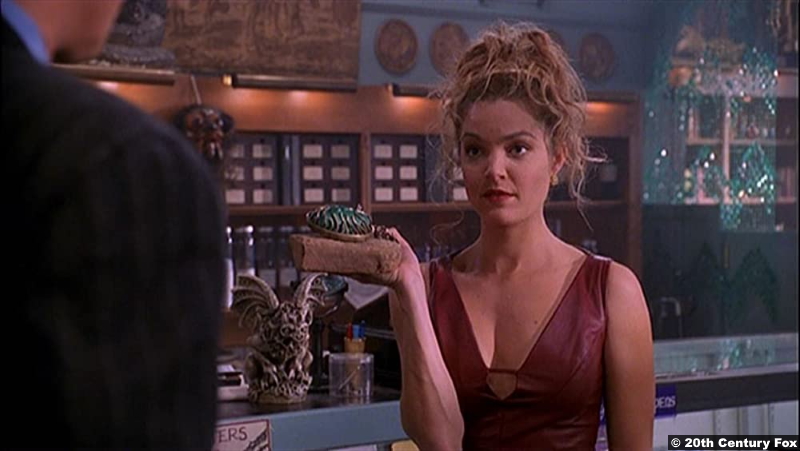 No, really, it’s perfect. She’s actually a god from another dimension with more power than any baddie before her. The whole “valley girl princess” schtick is just the embodiment of her vanity, which makes perfect sense considering her god-like nature. This is Glory, the frequently worshipped, occasionally monologuing, often air-headed, brain-sucking god of mayhem that just wants to find one little key that will let her go back to the dimension she was kicked out of, even if that means spilling the worst of that dimension out into our world to do it.

Obviously, there’s a lot going on this year, including a ton of character development for Spike, as he teeters on the edge of a full-blown from likeable villain to lovable good guy. There’s also the continuing romance between Xander and Anya which makes for some delightful and hilarious moments. And there’s Riley, who gets half a season to bumble around and be perfectly cromulent in all the worst possible ways.

But the real heart of the season, excluding our big bad, revolves around three women, the Summers: Buffy, Dawn, and Joyce…