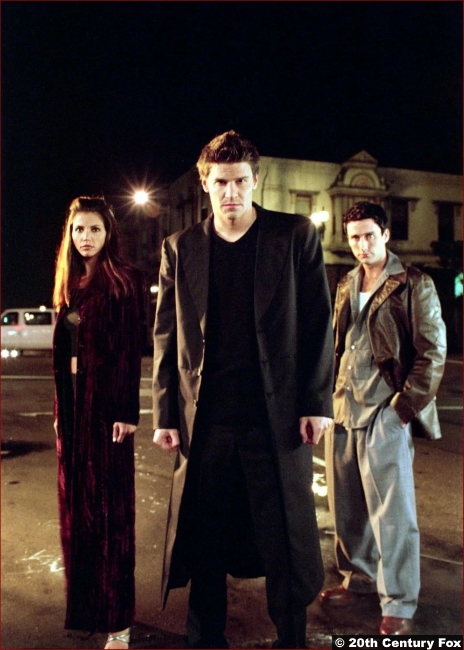 Just as Buffy needed a dozen episodes under her belt to find her groove, so too did Angel. Nevertheless, the noir-laden aesthetic that would define the series was present from the very beginning. The spinoff never reached the level of influence in the cultural zeitgeist as did Buffy but it has its fans, many of whom regard it as the superior show. For a science-fiction comparison, Buffy is to Star Trek: The Next Generation what Angel is to Star Trek: Deep Space Nine. It was darker, slower-paced, more serialized, and more devoted to developing a core cast of characters.

Probably the biggest difference between the two shows was the willingness of Angel to experiment with its major themes and structure. Buffy basically had a formula that was defined for her show as early as season two, and the series hardly deviated from it until, arguably, the end of the final season. For the most part, Buffy had a theme to explore in each season, both internal and external, and a big bad that challenged her as she explored that theme. Angel, on the other hand, never sat still or kept true to a single formula. Instead of a season-long big bad that changed every year, Angel had one that overshadowed the whole series, as well as two or sometimes three lesser big bads to contend with every season…until the fifth when they had none. Instead of one season-long arc that took the characters on a journey, Angel relied on multiple mini-arcs…except for the third where they had just one. Instead of both an internal and an external goal to achieve, Angel blurred the lines between the two, taking its lead character on much more of a developing journey than Buffy ever had, except for the first where he was mostly static.

You see what I mean? Angel often went out of its way not to do things the way they were done on Buffy, but the showrunners also never let the show find a groove and ride it to the end. Things were always shifting around. That might be because the WB Network never seemed happy with the ratings or the tone of the show, and were always pressuring Joss and co. to shake things up, but it could also be that, because it was the spinoff, the B-show, the other Buffyverse series, the creators knew they had more of a license to play around and try new things.

During the show’s time on air, Joss remarked that Angel was the only show on the WB Network that wasn’t trying to be like Buffy, and that was clearly a deliberate choice, as evidenced by the show’s first season. There’s no easy way to rate the five years Angel was on the air, season by season, nor are there near as many stand-out episodes to point to (though there are a few). The show is better considered in chunks; half a season here, a third of a season there, a few two or three parters, etc. Some of these mini-arcs are among the best Buffyverse content you’ll find anywhere. Some are flat-out misfires. One thing you can never criticize Angel for is a lack of effort; the show never settled, never went for the easy payoff. It swung for the fences and even though it struck out a few times, the effort was always there and always felt. It’s that reason why its fans, loyal and few though would be, stuck with the show from the rocky start, through the amazing middle, to the rushed and abrupt studio-mandated ending.

Let’s talk about the rocky start. 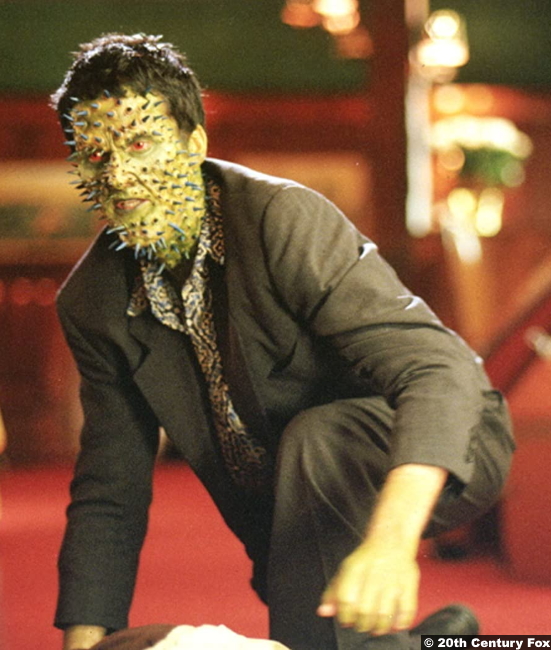 Angel’s first season can best be divided into two unequal halves. There’s the first half, consisting of the season’s initial ten episodes, and then there’s everything else that followed, in the season’s final twelve. The first ten episodes are built around what was likely intended to be the permanent core trio of castmates: Angel, Cordelia, and Doyle. Two of those are well-known to Buffy fans.

The titular character was part of some of Buffy’s most important moments in her first three years, and her relationship with the vampire with a soul was the catalyst for Buffy’s series to take the next step from “okay show with promise” to “must-see TV.” Nevertheless, after dying the way he did at the end of Buffy season 2, Angel was brought back with the writers forced to answer the question: How do you top what we’ve already done with Buffy/Angel? Angel returned early in Buffy season three and never really felt “in place.” Of course, the only reason he was brought back was because his own series was already in development, but still, for most of Buffy’s third year, Angel felt like he had one foot out the door, ready to go off and do his own thing, no longer defined simply as “Buffy’s beau.”

Cordelia on Buffy was, at first, nothing more than the cliched high school foil. She was the preppy, rich, stuck-up popular girl who made life miserable for the new kid in town. Within just two and a half years, Cordy grew into a fully realized character, and despite only having half the amount of screentime (if that) as the core Scoobie gang, she arguably demonstrated more character development in those three seasons than anyone else in the entire show. Choosing her to leave to spread her wings on a new series was the perfect move by Joss Whedon.

Doyle is the newcomer and from the jump, he never really fit. It’s easy to say he wasn’t given a fair shake due to his being the only one of the three that we didn’t know, but the real problem was his character was too similar to Angel’s. He’s a tormented demon, trying to do right in a world that is evil enough even without the supernatural ghouls running around. That’s…basically Angel’s whole schtick, and while it might’ve been interesting to introduce a character like that three or four years down the line after Angel has developed and evolved, it doesn’t work to bring him in for the pilot episode. Fortunately, Joss and co. were unafraid to upset the applecart midway through a season; they wrote Doyle out in what was, ironically, the character’s best episode, and spent the rest of the year developing the Angel/Cordy dynamic, building up the show’s supporting cast of characters, and bringing in a new “third character” to complete the core cast. 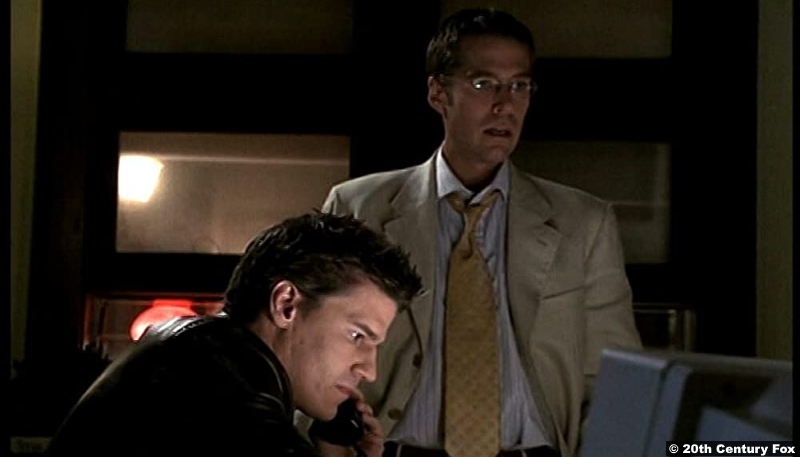 Introduced in Buffy season 3 as Faith’s Watcher as well as a foil for Giles and overall a comic relief character/bumbling idiot, Wesley Windham Price takes the cake for greatest character development in the history of the Buffyverse. Other than maybe Star Trek: DS9′s Damar, there’s not another character in fiction who so smoothly and realistically goes from a glorified nobody to one of the most endearing somebodies on his show. We’ll say more about Wes as the series progresses, but in season one he is here simply to take the place of Doyle and when he does, instantly the show picks up in quality. There’s a vibrancy, a fun energy, and a more comfortable dynamic at work whenever the trio of Angel, Cordy, and Wes are on the screen together. Much of the second half of Angel is just as messy as the first, in terms of episode-by-episode plots, but getting through them is infinitely easier than it was when Doyle was playing the third wheel.

The less said about the episodes in Angel’s first year the better. There are a few standouts, but the whole of it is just as clunky and stilted and uncertain of itself as you would expect from a debut season. Nevertheless, as with Buffy’s first year, the episodes that work are the ones the creators learned from and replicated. There are a handful of fun one-off episodes that matter very little other than being good compared to the stinkers: “Rm w/a vu” features Cordy contending with a ghost that’s inhabiting a very nice and shockingly affordable apartment in L.A. “Somnambulist” sees Angel contend with a killer in town (played by a very young Jeremy Renner, about a dozen years before Joss would cast him as Hawkeye) that’s copying a lot of his trademarks from his Angelus days. And the season finale “To Shanshu in L.A.” is centered around an ancient prophecy (one which will define the character of Angel to the end) that says the vampire with a soul will die…or does it mean “become mortal”? Prophesies are tricky things…

But the real standouts this year center around the Slayers, Buffy and Faith. Angel’s ex-girlfriend/forever-love comes to town early in the show’s run (to give the fledgling series a ratings boost) in “I Will Remember You.” It was only the eighth episode in the show’s run, but it instantly launched to the top of the fan ratings and remained in the top ten until the end. It provided a fitting closure to the Buffy/Angel dynamic, packed in a ton of comedy and drama, and ended with an absolutely gut-punching final goodbye. Angel was created to be a more noir, darker, more brooding, more character-focused show than Buffy and no episode this season nailed that mission statement better than “I Will Remember You.”

Faith’s relationship with Angel—two good people who did a lot of bad and don’t quite know how to deal with that fact—was never explored in Buffy and, sadly, wasn’t explored nearly as much in Angel. Nevertheless, season one brought us a two-parter good enough to be a movie-of-the-week. Faith awoke from her coma and did a lot of damage in two episodes of Buffy’s fourth year, but she started to make amends in Sunnydale just before skipping town. Unfortunately, a lot of that amends-making was unbeknownst to Buffy, who tracked her down right as she was finally breaking down and wishing to die (a sentiment the ever-brooding Angel could easily identify and sympathize with). He takes her in right as Buffy arrives looking for a fight. What follows is a tense showdown between the old lovers, ending with Buffy essentially being told “this is my town, we’re doing things my way, go back to Sunnydale.” It was just as much a declaration to the fans watching as it was to the characters: Angel is his own man, and his show will not be “Buffy 2.0”

And while, at times, it felt a lot like Buffy’s first season 2.0, Angel’s first season managed to reveal enough promise to make the whole endeavor something to come back to in year two. And just in case you needed extra motivation: Season one ends with the reveal that Darla—Angel’s longtime vampire squeeze and partner in barbaric crime—has been resurrected.

Unlike Buffy, Angel loved to end seasons on a cliffhanger, and season one does just that, setting the stage for the title character to take his Buffy-sized leap in quality in season two.

But we’ll talk about that, as well as Buffy’s fifth season, next month. 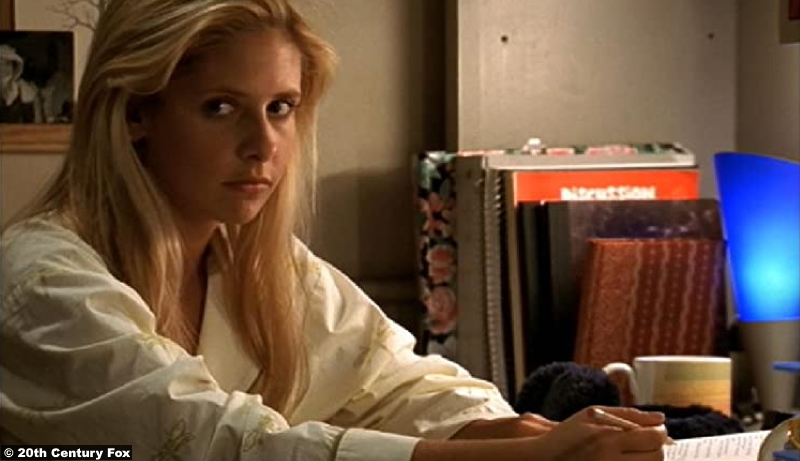