WandaVision is the MCU’s first big Disney+ show, taking us into the apparently fractured mind of Wanda Maximoff. You can check out our previous reviews here… 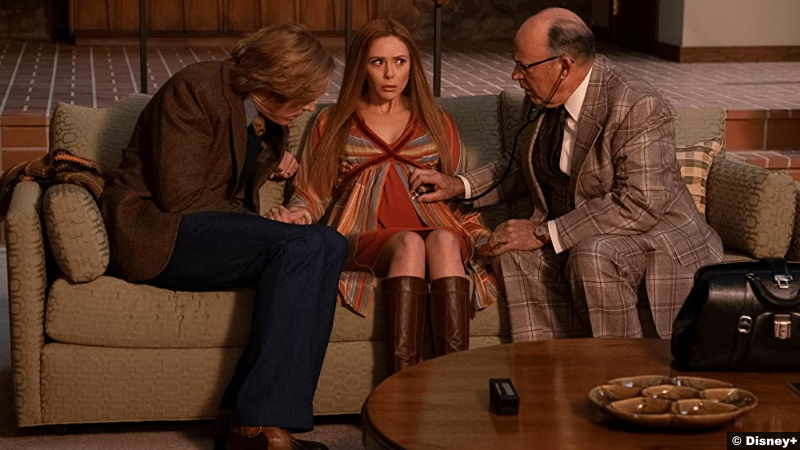 WandaVision’s third episode takes us into the colorful world of the late-60’s/early-70’s and puts its focus on Wanda’s pregnancy. She was revealed to be carrying at the end of the previous episode, curiously right around the time she witnessed an illusion-shattering bee-keeper. So far in the show, we’ve been given hints as to what is going on, but what has been left unclear is how much Wanda (A) knows about it, and (B) is in control of it.

After episode two it seemed obvious she knew about it and, after episode three, it’s clear she is more in control than she might let on. I had initially thought she was trapped in an illusory world, only semi-conscious of it and only able to affect it at times when she was under duress. That is no longer the case. In fact, it’s almost as if the show is setting it up for Wanda—not Agatha Harkness, not Mephisto—to be the actual villain of the show. There was certainly a strong “big bad” vibe being given off in her final scene.

My praise for the episode is in the tension, and mood, and the clever way the writers got her from peripartum to postpartum within the span of a single episode. Credit to them, especially, on that front, as there are only nine episodes to work with and clearly there’s a lot more story to be told with the children already in the mix. With that central goal in place, the episode focuses exclusively on it, without any B-plot or even time to breathe. That’d be my critique of it, in fact.

I adored the first two episodes for committing to use their time-setting to tell a “TV Episode story.” We had a very I Love Lucy-esque plot in episode one, a very Bewitched plot in episode two, but in episode three there was just a Brady Bunch aesthetic, without the plot. Granted, you can’t really have a Brady Bunch plot without the children, and almost every other family show in the late-60s and early-70s had children, as well. Options were limited, but I would have preferred something resembling a point-A to point-B sort of plot. Instead, it was just a series of scenes that moved us from the ending of episode two to the beginning of episode four.

That being said, the moments that stood out—two in particular—were worth the price of admission: First was the glitch that Wanda (presumably) caused as Vision started to remark how “something’s not quite right.” Instead of a big, showy “rewind” like at the end of the last episode, there was a video frame stutter and a redo of the scene. The second came when Geraldine mentioned Pietro getting killed by Ultron. The hypnotic way she said it makes me think she’s more than just a plant by S.W.O.R.D. and instead was somehow mentally-trapped in that place the same with all the others. The mention of Ultron—mentioned by Wanda first, mind you—seemed to snap them both out of the illusion, and what followed was one of the tensest and creepiest scenes in the entire MCU. 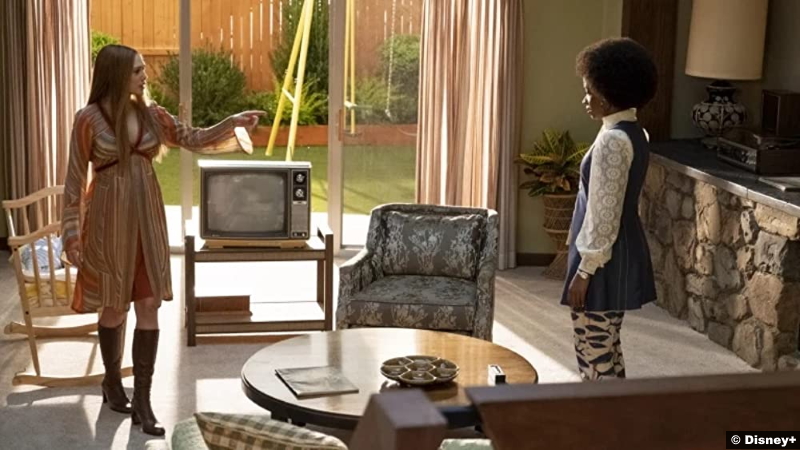 That scene was aces; I’d have just liked there to be more of a plot to go around it.

8/10 – Thrilling in places, chilling in others, but lacking much of a stand-alone plot to keep it standing on its own two feet. 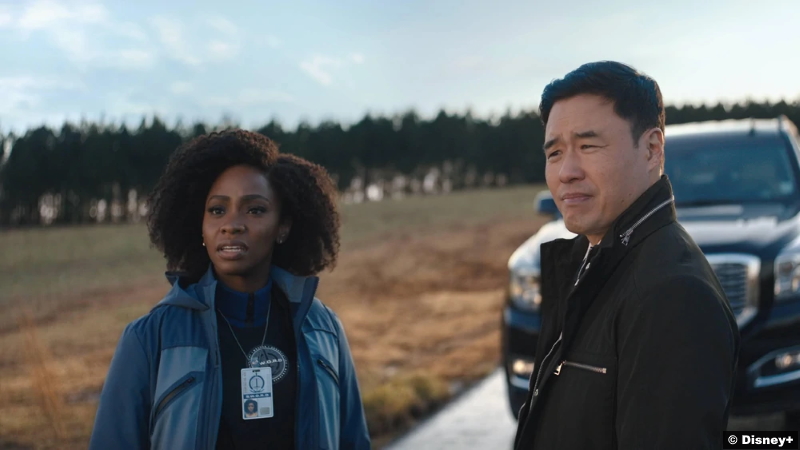 Hoo boy, where to begin? This episode felt at times like a reset, at times like a deep dive, and at times (at almost all times) like an entirely different show operating in parallel with the one I’ve been watching. Other than a brief scene at the end, the stars of the show are essentially absent. Instead, we rewind to the immediate aftermath of Avengers: Endgame, and I mean immediate aftermath, as the first scene of the episode features the visual of those dusted by Thanos getting un-dusted. It was a wild and memorable special effect sequence, one which I didn’t know how much I needed to see until that moment.

On the flip side, my relaxed and popcorn eating self was not ready to see Zombie Vision. I think I choked on a kernel. Before that, the scariest moments in the MCU were probably Ultron’s first appearance, and the Mysterio illusion showing dead Tony Stark to Peter in Far From Home. Those two are child’s play compared to the suddenness of the cut to a dull, lifeless, hole in his head, no eyes, Vision. The implications behind it are immense, to say the least. I’m leaning towards it being a manifestation of Wanda’s psychotic break, which is slowly getting worse and worse as these episodes progress. 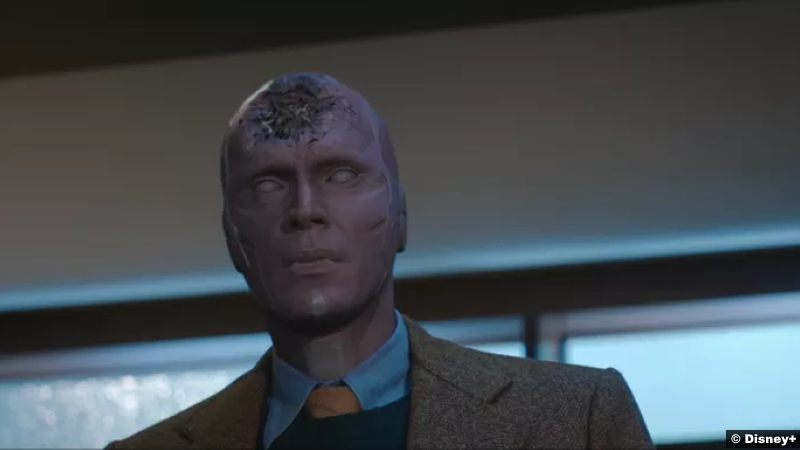 Special shoutout to Disney, for providing this show (and presumably the later ones, too) with a proper MCU budget. There’s not a hint of a drop in quality, which wasn’t able to be appreciated in earlier episodes due to the show sticking with the retro aesthetic. This one being 99% in the modern world, with HD production, allowed it to really pop. I look forward to diving back into the world of WandaVision, whether next week or later, but it was a nice change of pace to spend so much time in the real world.

And speaking of, it was the ultimate delight to have so much attention given to three characters who, essentially, were bit-players in Thor (Darcy), Captain Marvel (Rambeau), and Ant-Man (Woo). It was like a B-characters Avengers team assembled to figure out the mystery of WandaVision. Or, as they described it in the show, in one of the most meta and grin-inducing lines I’ve ever heard on TV… 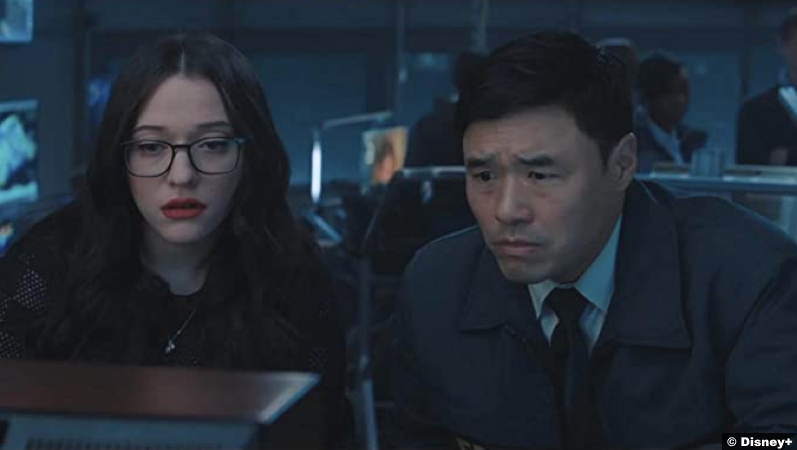 I know Agents of Shield was kind of hit or miss on ABC, but as a 10-episode D+ show, I’d watch the heck out of an entire MCU-set X-Files-like series starring Monica, Darcy, and Jon.

If I had a knock it would be how short the episode was. That being said, I’m reviewing these in pairs and so far they work perfectly when grouped in two. That’s it. That’s my only complaint. Great episode.

10/10 – On paper, it’s an episode purely designed for exposition and piece-moving, but it works because of likable characters and by offering a compelling re-examination of what we saw in the first three episodes.

Random: You know what would work? Making the Fantastic Four’s origin be that they work for S.W.O.R.D.