His Dark Materials S02E04 Review: Tower of the Angels – VENGEANCE?

Once upon a time, there was a philosophers’ guild. They’re the ones, we’re told, who created the subtle knife. But that’s not all they created. 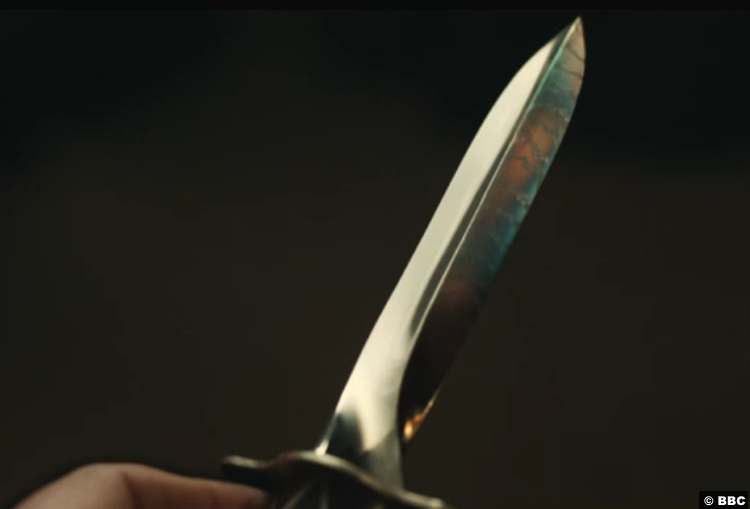 Once they figured out how to use it cut between worlds, they just couldn’t stop. But all that cutting released spectres into their world, who devoured all the adults they could find. Is that why there’s a rule about closing every world window you open?

Anyway, cut to the time of the present story, where the subtle knife turns out to be easy to find, but harder to get. After that build-up about how there’s no entrance to the Tower of the Angels, the solution was pretty funny. Uh, maybe it’s this door with an angel on it?

And it’s not even a magically enchanted door–two teenagers knock it down. But maybe that’s because there’s already a teenager in the tower, a young man whose closeness to adulthood has made him desperate. (Because the knife can kill spectres.) He’s taken the knife from the bearer, Giacomo Paradisi (Terence Stamp), and if Will and Lyra want it, they’re going to fight this kid for it. 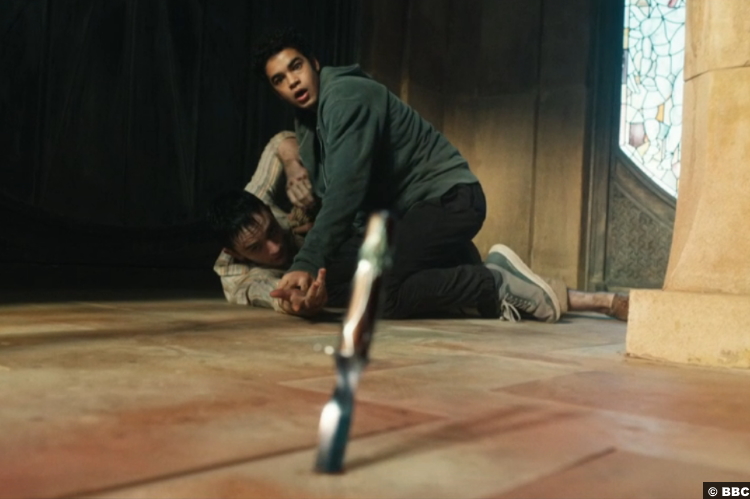 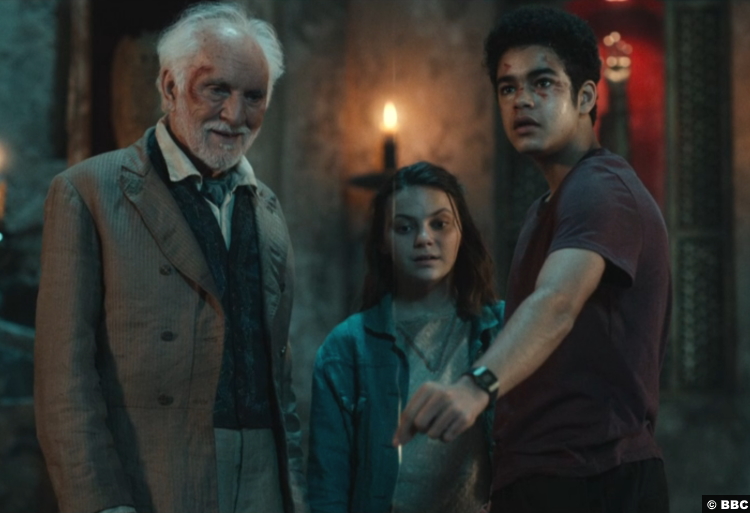 Again, though, just because you take the knife doesn’t mean you get to keep it. The door might not be magic, but the knife is, and it seems to choose who will be its bearer. In this case, it chooses Will, at the small cost of two of his fingers.

Paradisi sticks around long enough to show Will how to open and close worlds with it, and to give him the rules, but he’s at the end of his journey. However, he’s not going to let the spectres take him. Instead, he thwarts them by drinking poison. 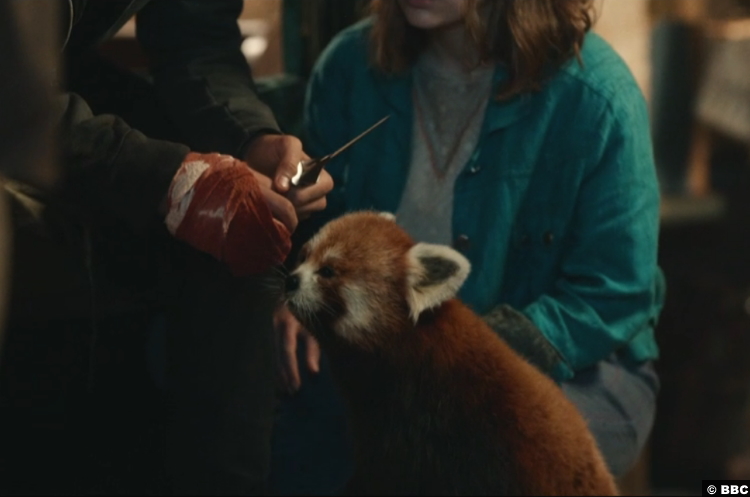 In the aftermath, Lyra and Will make plans to steal back the alethiometer. They know they can’t give the knife to Boreal and he can’t keep the alethiometer. After all, why does this guy get to keep the most magi–anyway, I want to talk about the fact that Pan touched Will. Lyra likes him, I whisper-scream. Because I am not screaming on the outside, but I am definitely internally hollering. And the screams don’t stop.

After a long and annoying journey through the jungles of uh, somewhere, Lee finally gets his man. He finds Stanislaus Grumman (Andrew Scott), who is very obviously John Parry. But because he’s a cool shaman now–or a Hot Shaman, for Fleabag fans*–he goes by Jopari. One name. 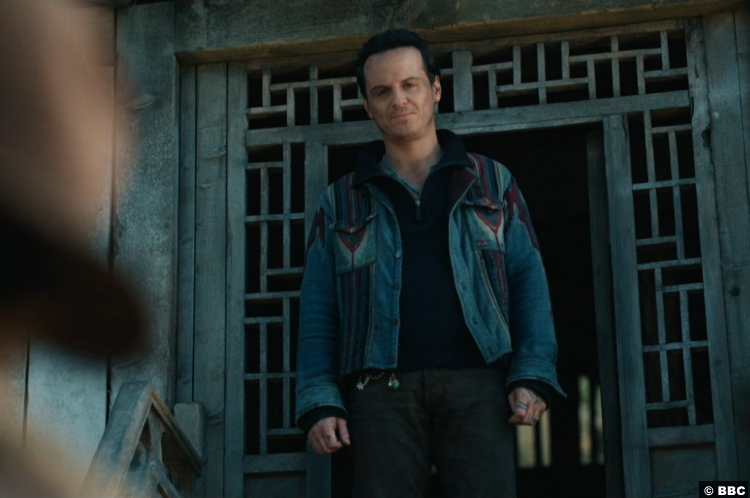 Sure. And as he babbles on with his hippity-dippity nonsense, Lee’s like, “A’ight, I’m gonna go. I’ve had just about enough of everything.” But he changes his tune when Jopari gets vulnerable and confesses that he once chose his work over his son. Uh, you could still go back. You could still choose your son.

Anyway, now he’s determined to help Lord Asriel. And I like how they both acknowledge that Asriel sucks, but maybe there’s a point to his work. However, Jopari’s not really clear on how they’ll help him beyond finding the bearer of the subtle knife (eee!) and delivering him to Asriel. And he’s like, “Also, we’ll get this Lyra, I guess.” (Related note: Jopari says he called Lee to him using Ma Scoresby’s ring. Did he also call Lee’s airship because how else did it get to the middle of nowheresville?) 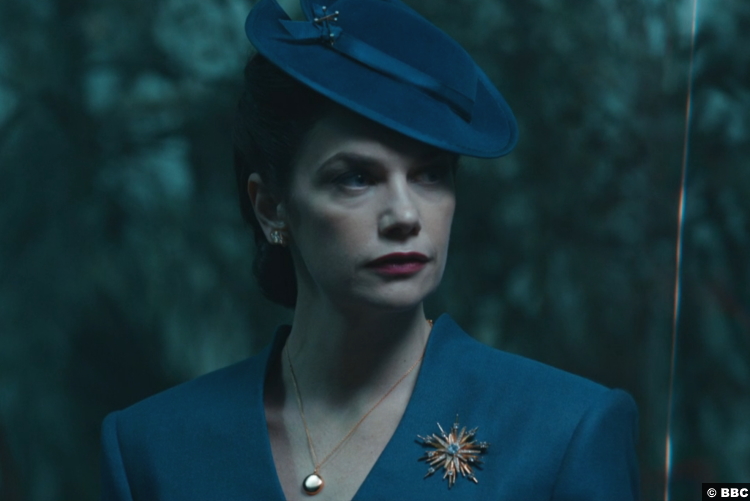 Elsewhere, Boreal tells Mrs. Coulter that Lyra’s in our world. He takes her there via Cittàgazze, where she sees a spectre. Notice that she’s not afraid of it? Maybe it’s because she doesn’t know what it is. Or maybe she just thinks it’s a witch.

Speaking of, let’s check in on them. Oh, they’re fighting the Magisterium again? Great. Write if y’all get work!

Back in “The Cave,” I didn’t mention an observation I had while watching the episode. The Cave, the actual supercomputer, kind of looks like a tower. I hope that’s intentional, because it makes a nice parallel with the Tower of the Angels. 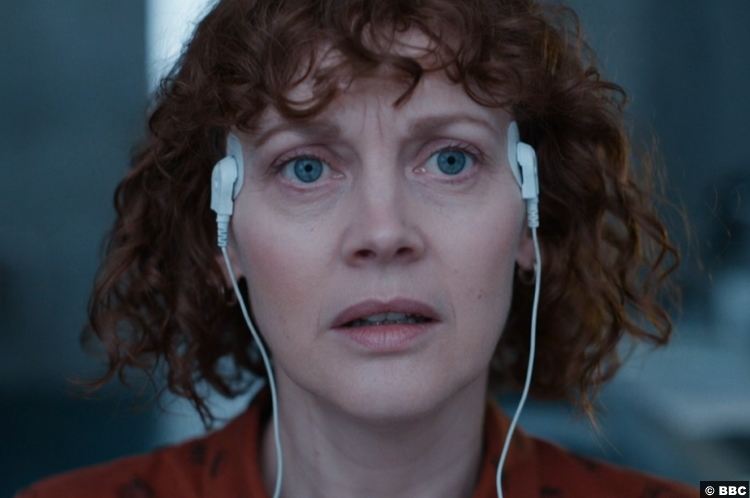 I mention the Cave because, of course, Mary tries again with it, trying to interact with it like Lyra does with the alethiometer. And finally, it works. She’s zoning out, probably doing what I do when I try to meditate (“Okay, clear mind. Not thinking of anything. Just a blank page…”) when a voice commands, “ASK A QUESTION.”

Yes, dark matter is Dust and it is conscious. But while it’s attracted to humans, it’s not human in itself. Humans have always known them, though, in their “UNCOUNTABLE BILLIONS.” So what are they? “ANGELS,” which they try to explain to ex-nun Mary in a way that she’ll understand. They gave of themselves, of dust, to humans to give them consciousness. But why, Mary asks. The answer: “VENGEANCE.”

9/10 – While this was still a very good episode, the scenes with the witches are just not as good. They look cool and I want to love them and scream for them, too, but their scenes just drag so much.

*This is appropriate, of course, because Phoebe Waller-Bridge voices Jopari’s daemon  Sayan Kötör.