His Dark Materials S02E02 Review: The Cave – Nailed it!

One of the things I like about His Dark Materials, both the book trilogy and this series, is how rich the characterization is. Even characters that are mean or “bad” aren’t really just one thing. 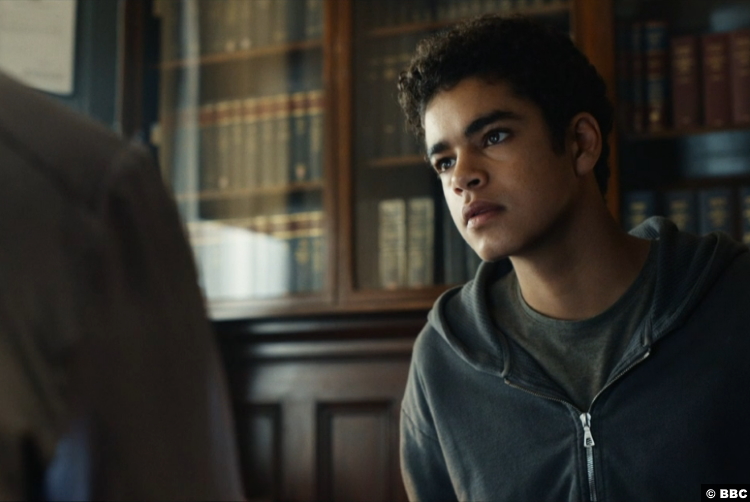 This thought brought to you by the appearance of Will’s grandparents, who aren’t actually in the book. Nevertheless, I could empathize with them. They haven’t seen their grandson in a long time, maybe ever. Granny is the kind of person who believes a policeman is always there to help, so, understandably, she’d think it’s just a simple mix-up. And Gramps, on the other hand–again, they haven’t seen Will, and the first time he visits, the first thing he wants to talk about is his trust. It’s understandable, too, that Grandpa would be immediately suspicious.

And I’m not placing blame on Will, either. He’s had to shoulder a lot of responsibility in his young life, and he’s been through some upsetting experiences lately. It’s believable that he wouldn’t be able to navigate this meeting smoothly. He’s not really thinking of niceties; he’s thinking of the urgency in keeping his mom safe. 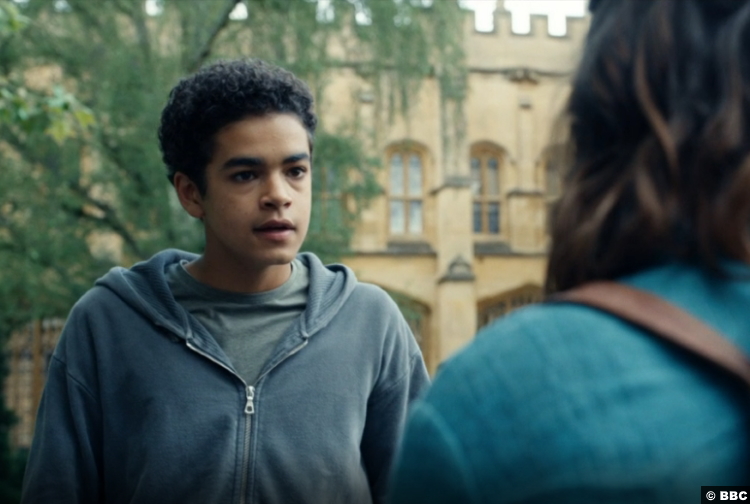 Still, I wish he hadn’t snapped at Lyra. Then again, I guess it’s fair play for the silent treatment she gave him last week when he was weird about Pan. They both have a lot of acceptance to do. Of course, Lyra took her first steps into our world this week. Nevermind that she almost immediately got plowed down by a car.

That and her general befuddlement at being in our world is why I was surprised to see Will just kinda ditch her. I mean, yes, he wanted to go check on his mom, but I’m still not sure why Lyra couldn’t go with him, especially since he just looked on at her from afar.

The real reason, though, is that Lyra had to meet Mary Malone (Simone Kirby). Y’all excuse me for one moment, please?

Okay, I’m back. Anyway, the alethiometer has led Lyra to find a “scholar,” whom she’s surprised to find out is a woman. They don’t have that in her world, after all. Mary is a researcher in the Dark Matter Department, which she and Lyra soon find out is the same thing as Dust.

Mary, very game for a lady interrupted in her work by a child, explains her research to Lyra. They’ve been testing dark matter, trying to see how it reacts to different things. It’s shown negligible responses to most inanimate objects, with a greater response to manmade items. However, it displayed the most dramatic response when Mary hooked herself up to the supercomputer.

As the way Mary describes her mental state at that time sounds like the way Lyra reads the alethiometer, the girl tells her about it. She even demonstrates its use, answering a question about Mary that she couldn’t have known otherwise. 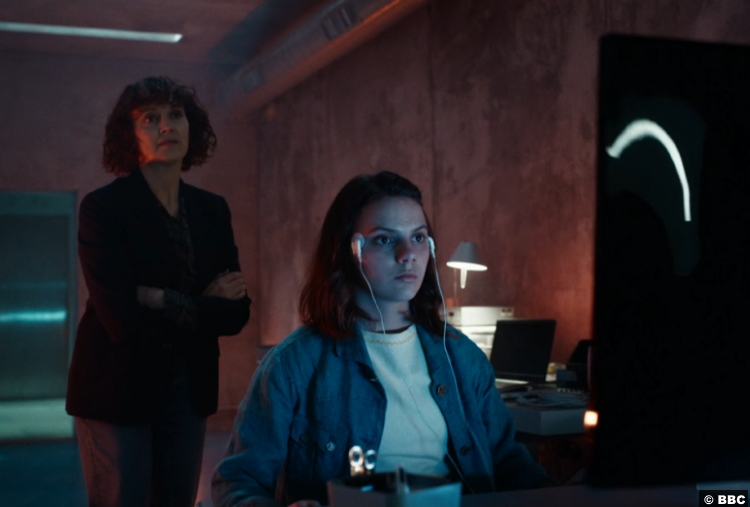 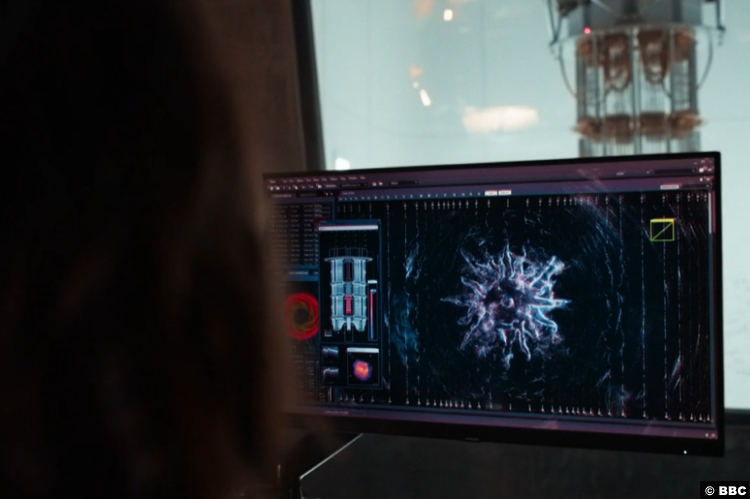 So, Mary hooks Lyra up, and the dark matter responds in the most significant way yet. Not only do the particles move, but they also move in a frenzy, forming the alethiometer’s symbols. It’s as if they’re speaking to Lyra in her language, telling her that Mary is important in what’s to come. 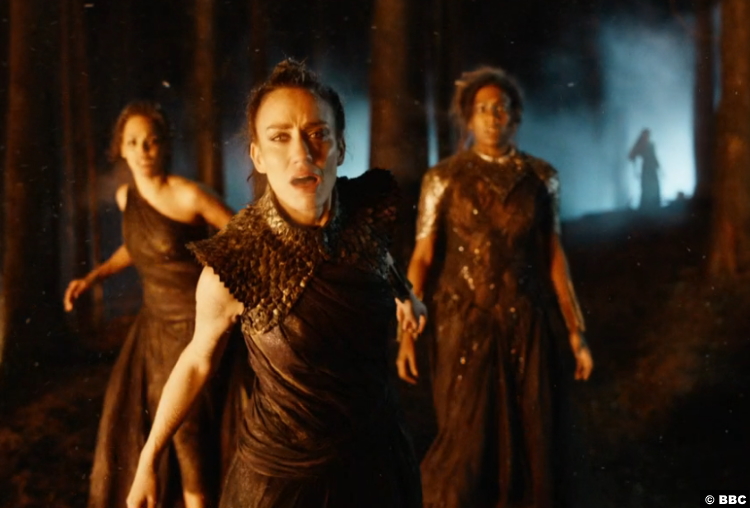 Of course, the show still hasn’t revealed that yet, despite the many references to Lyra’s being the child of the prophecy. And of course, that was a secret the witches killed and died to protect. This week, they are repaid for that with a violent attack from the Magisterium. It’s all part of Father MacPhail’s plot, which he orchestrates to look powerful in front of the rest of the Magisterium, so he can be the new cardinal.

The Magisterium plot is never the most exciting for me, but the cardinal’s funeral is done well. It really gives you a sense of the size of the Magisterium, in a way that even the airship attack doesn’t. 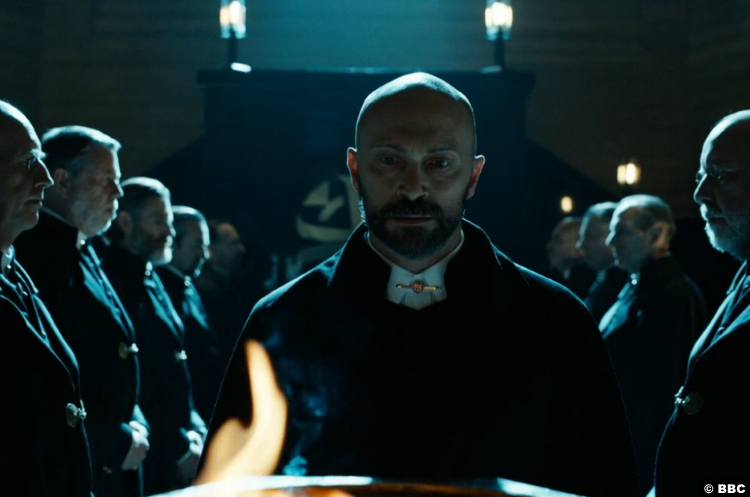 Still, though, I think it was a mistake. Father MacPhail may have looked strong with this show of force, but I’m not sure he’s prepared for a full-on war with the witches. Be careful what you wish for, I guess.

9/10 – The show has sometimes struggled to make scenes that were vibrant in the book as affecting in live-action. However, I think they really nailed it with Lyra’s introduction to Mary Malone, who will indeed be important as the story goes on.