Hello and welcome once again to His Dark Materials. If you missed season one, then you should probably go and watch it (or read The Subtle Knife, upon which season two is based). I can’t think of a way to summarize it that wouldn’t take up this entire review. Like, this season starts in another world–does that help?

Probably not. But if you have been watching, then you should remember that last season ended with both Lyra and Will leaving their own worlds for another. They actually end up in the same world, in the city of Cittàgazze, the city of Magpies. (Also, the city of thieves.) 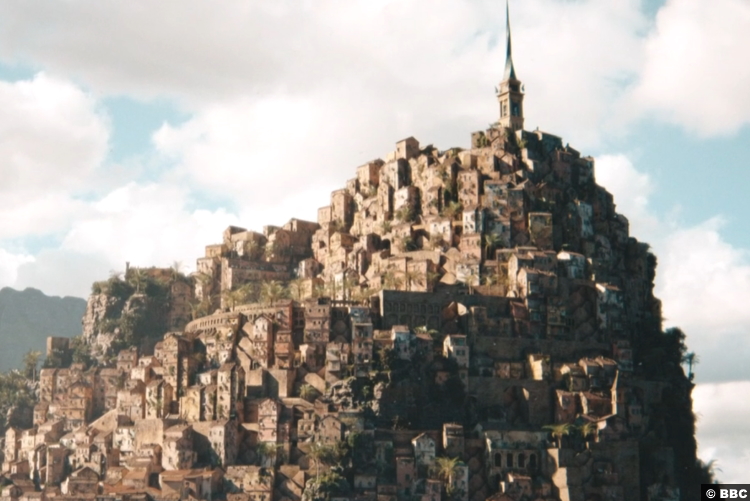 This is all obviously new for them, and especially for Will, who comes from our humdrum world. Just seeing Pan for the first time is a bit of a shock for him. He quickly acclimates, though, and so does Lyra to him, although she was a bit offended at first. 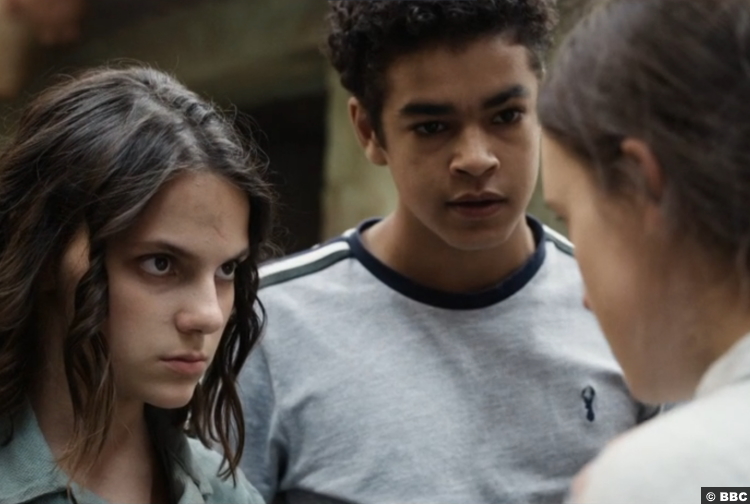 They set out to explore the city, which is disturbingly vacant. Finally, though, they come across a couple of residents, including Angelica (Bella Ramsey, aka Lady Lyanna Mormont). They explain that the only real people left in town are the kids. Once you become an adult, then you become vulnerable to spectres.

In some lights they were hardly there at all, just visible as a drifting quality in the light, a rhythmic evanescence, like veils of transparency turning before a mirror.

They feed on your dust and take your soul, leaving you just a shell. If you’re thinking that that sounds like what happens after intercision, then you’re not far off. People who have undergone intercision are immune to spectres, because what’s the point? 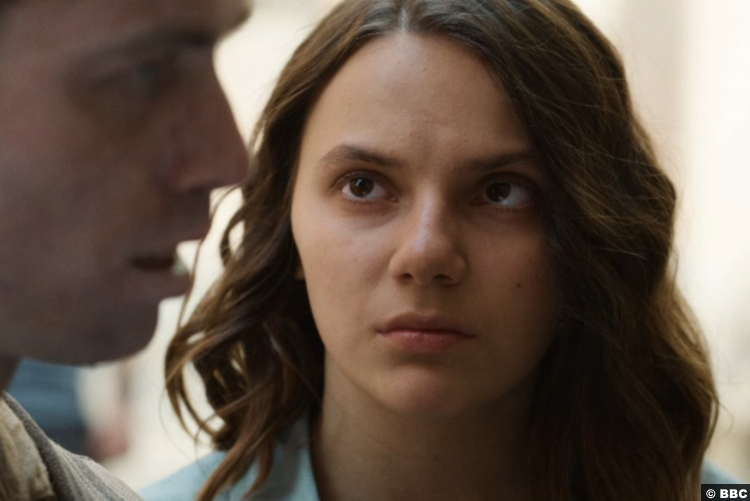 Will and Lyra see one of these post-spectre adults and it’s scary, much scarier than anything we’ve seen so far. I was impressed with it; I thought they were able to convey the horror of it, in a way they weren’t with intercision. Anyway, Lyra’s still too young to attract the spectres, but Will isn’t. At least, not for much longer. And of course, the last time we see him, one is hovering just behind him. That’s terrifying, but all the scenes before that, between him and Lyra (and Pan), were just as sweet as it gets.

That stands in marked difference to the scenes with Lyra’s mother. Mrs. Coulter, never one to rest when she could be doing evil, is, uh, doing evil. The Magisterium has captured a poor witch, whom Mrs. Coulter spends the bulk of the episode torturing. I love this family show. Speaking of, it’s fun to watch her interactions with Father MacPhail, who is played by Will Keen, aka Dafne Keen’s IRL dad. Father and daughter look so much alike that it seems like it might be a plot point. (It is not, as far as the books go.) 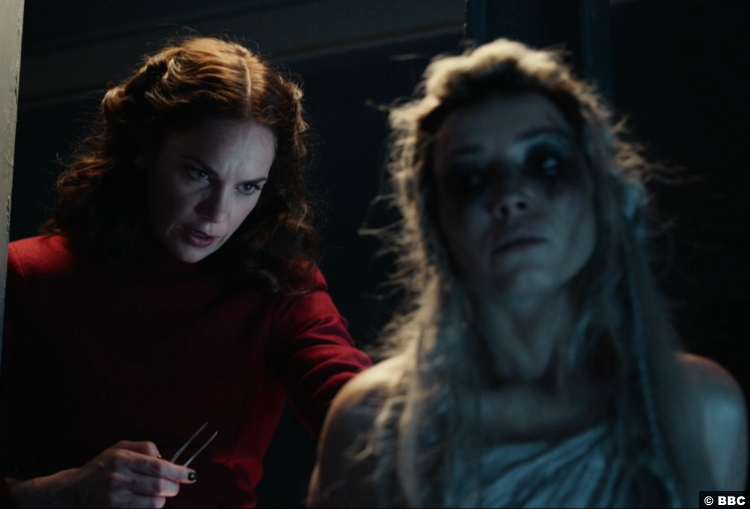 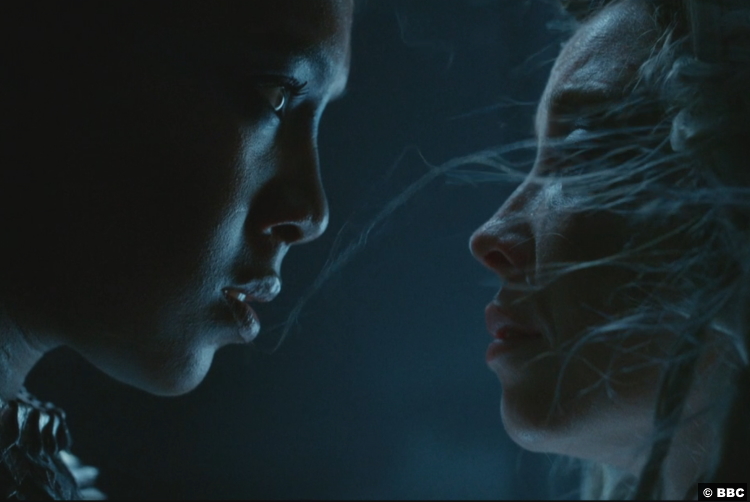 Anyway, despite the torment, Mrs. Coulter doesn’t learn the prophecy the witches know about her daughter. Thanks to Ruta Skadi (Jade Anouka), a certified badass, who rips through the Magisterium ship before mercifully ending the captive witch’s life, Mrs. Coulter’s left holding nothing but actual dust. And the sprigs of cloud-pine she ripped out of that unfortunate witch’s body. (Again, a family show.)

On a related note, I do have to say that I love the witches’ look. They look like they bought the entire H&M collaboration with The Vampire’s Wife and I am here for it. 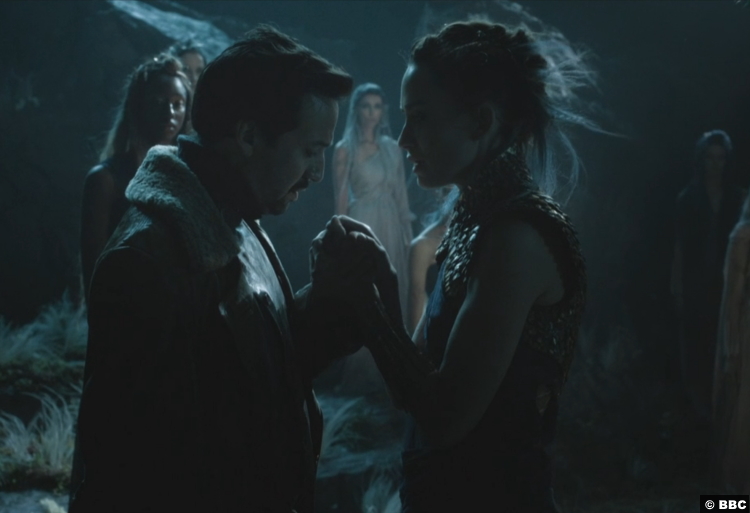 Back in the city of thieves, a reluctant Lyra finally consults the alethiometer to ask one question: What’s up with Will? The golden compass tells her in its way that Will is a murderer, but a good one, like Iorek. So she believes that she can trust him, and that’s a good thing, too, because they’re both going to need that. Despite the relatively peaceful times in the creepy city, there is adventure coming and with it, danger. After all, they’re coming to our world. If Will survives the spectres, that is.

8/10 – This was a fine premiere. The show is probably too dense for newcomers to get into (and again, you can always watch season one/read my reviews). But if you’re familiar with the material, then it offers hints of exciting things to come.

I say, sobbing through the scene where Will sees Pan for the first time.