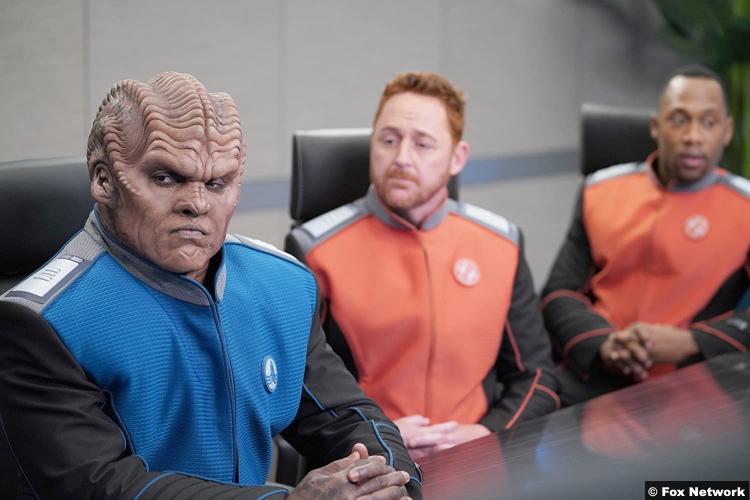 What is it? It’s a shaggy dog story that ends with Bortus literally “pissing into the wind.”

Ja’Loja was originally filmed and intended for Season One but was delayed because of scheduling conflicts. The actual “first episode” of the second season was supposed to be “Home” and that probably would have worked better as a sophomore year debut. There’s a lot to like about Ja’Loja, but it’s not exactly the best foot forward among the first episodes of the season. It’s a story without much to say, relying instead on the well-developed characters and relationships established throughout the show’s first season.

A lot is going on, with something like five mini-plots bouncing around from scene to scene. Maybe that’s why it was bounced from season one; maybe they thought it served as a good episode to give new viewers a little sampling of every character. In that sense it works fine, it just doesn’t work any better than that.

8/10 – It’s an empty suit, but if you like the characters, you’ll have a fine time hanging out with them for an hour. I did. 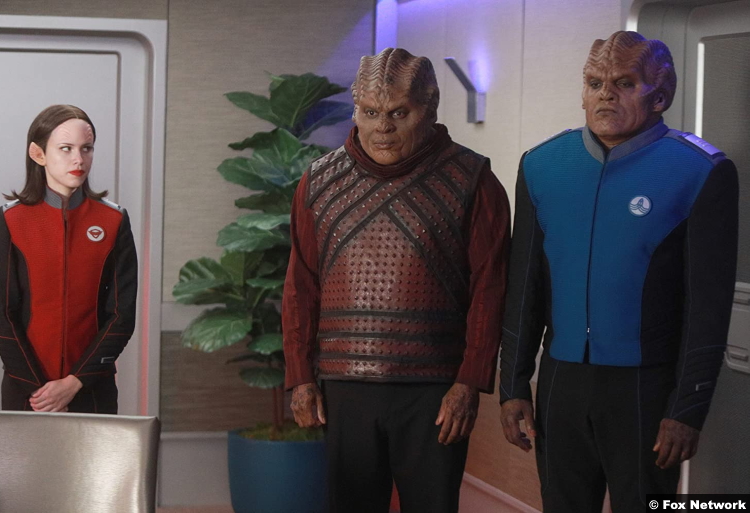 Star Trek is The Orville’s biggest inspiration and no show, other than Twilight Zone, did “sci-fi allegory” storytelling better than Trek. The Orville’s love for Gene Roddenberry’s series is seen in its willingness to “go there” and touch on issues our culture may be dealing with but might be too afraid to talk about openly. That’s the crux of this episode…it just happens to be presented in a style that never lets more than a minute go by without cracking a joke.

That’s not a complaint, by the way. Using humor to offset (or even just to hang a lampshade on) the awkwardness is fair game, and since The Orville is well-established as a “comedy sci-fi” series, it would have been odd for them not to find the obvious humor in Bortus’ addiction. Under the jokes is a genuine message and I appreciate the effort and the willingness to “go there.” That’s what Star Trek is all about, even if modern iterations of Trek are run by people who don’t understand that.

8/10 – Not a perfect outing, especially since it’s held back by a B-plot that has little connection to the main story. It’s solid but that’s it. 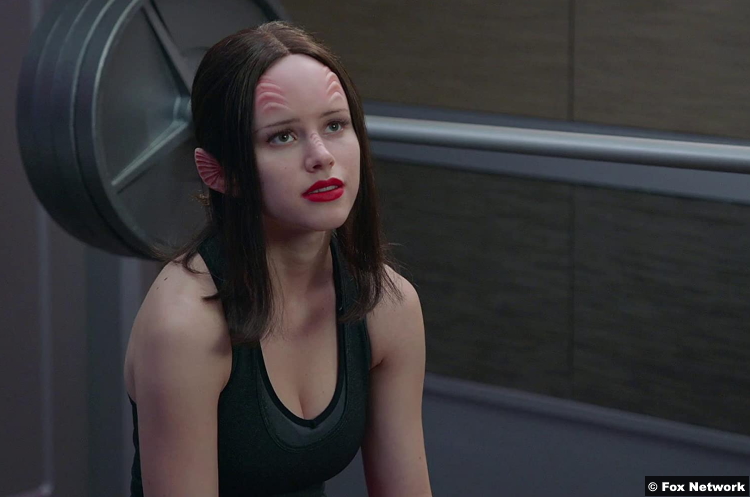 What is it? It’s the unwelcome farewell to my favorite character.

As said, this was meant to be the first episode of the season but things were reshuffled and instead, it fell here. Had this started the year, it would have felt like saying goodbye to Alara was a bigger deal than how it seemed after watching the episode. Maybe it’s just me, but when the episode ended I assumed it was just a half-season break and that she’d be back for the finale. I didn’t know the backstage drama that led to her leaving the show. I thought the actress in question (Halston Sage) was just taking a break to film a movie or something. But no, she’s gone, and apparently for good (but for an extended cameo later on), and that makes me sad because hers was my favorite character on the show.

As for the episode itself, it’s rock solid. There’s a great subplot revolving around Alara’s parents’ (especially her father) disapproval of her career in space, leading to a confrontation where Alara shows how valuable her time away from home was. It’s solid work all around, but I just didn’t believe that she was leaving the show for good. For that reason, my initial review was a 9 and I’m sticking with that. I felt like the big goodbye rang false, when instead it was supposed to be genuine.

9/10 – Every Alara-focused episode of the show was great. This was no exception. 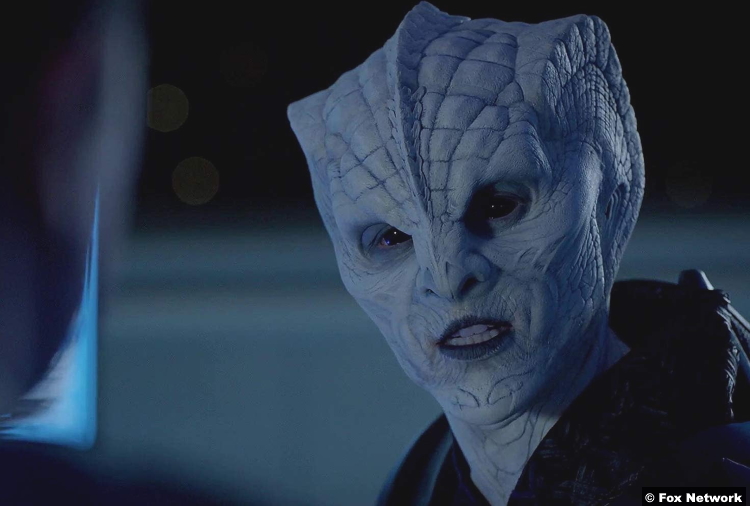 What is it? It’s well-intentioned serializing.

The episode deserves points for trying what it does. It works in layers, first by bringing back the Krill teacher from season one’s episode “Krill,” not in this episode but earlier in the season, introducing her as The Orville’s new cartographer (disguised as a human). I especially love how she was actually re-introduced in Ja’Loja, which means she was supposed to sneak into the show at the end of season one. Had that episode aired as planned, the big reveal of her true identity would have landed with a much bigger punch, I suspect.

Instead, it comes off as a bit rushed. We meet her in episode 1, don’t see much more of her again until episode 4, by which point she and Ed are off the ship and then her mask is taken off. It works well enough, but it’s all a bit too quickly done.

8/10 – I give the episode credit for using previous episodes as a foundation for future stories to tell. That’s one way it stands apart from, say, Star Trek Voyager, and slips into something more akin to the great DS9. 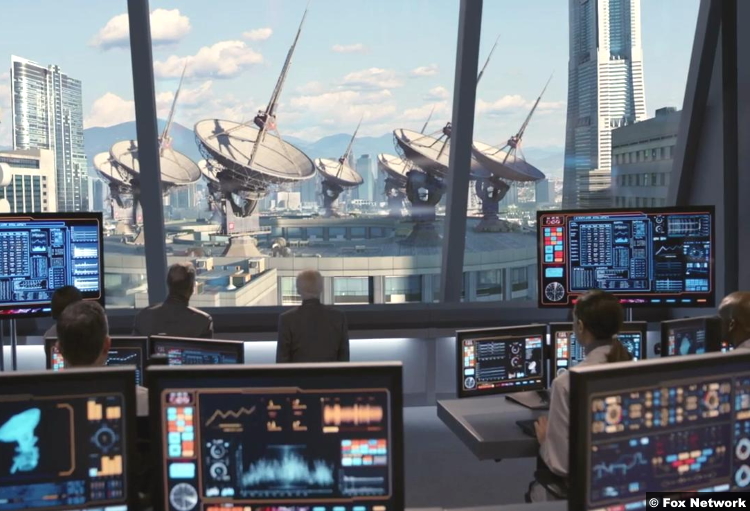 My biggest problem with this one is that everything seems like it’s happening without any rules or common sense at play. A planet shows its readiness for first contact and The Orville hurries to respond. That’s fine, and the scene where the ship celebrates the idea is really, really wonderful, but then the actual “contact” happens and things sort of go off the rails.

Obviously something would be amiss and in this case, it’s the aliens’ hangup with astrology as a guiding doctrine of their lives. The subsequent arrest of Bortus and Grayson defies logic enough (why would these natives not understand something as basic as relativity and stellar drift?), but the tech-solution to the problem (a giant disc that fakes the reappearance of a star in the planet’s night sky) is so maddeningly stupid it belongs on Star Trek Picard, not The Orville. It’s the wrong kind of stupid for this show. There’s no winking and nodding with this level of bone-headedness. This one is just a badly written conclusion.

7/10 – Several really good moments, lost amid too much writing that needed revising. 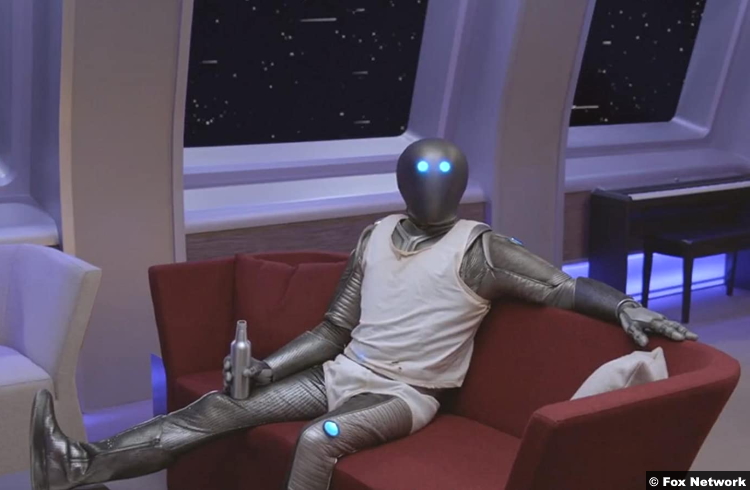 What is it? It’s…weird how well it works.

The episode’s premise is this: Dr. Claire thinks she’s in love with Isaac, the sentient robot. It ought not to work, but it does for two reasons. One: Everyone sells it, there’s not a hint of “this is silly but, wink wink, go with it.” Two: It’s been believably set up going back to last season. This isn’t something that’s just sprung out of the blue. When you plant seeds a year in advance, it makes it much easier to buy the stories that sprout a year later.

The episode’s turn, where Isaac decides he’s learned enough about human relationships and wants to end it, is at once the set-up for several funny gags, and a sad realization that the robot is just a robot. It’s also, unbeknownst to first-time viewers, a dark omen for the big mid-season two-parter to come.

Bonus points go to Bortus’ mustache. That might be my favorite running gag in the show thus far.

9/10 – Really well done science-fiction storytelling, with a believable human element at the core. 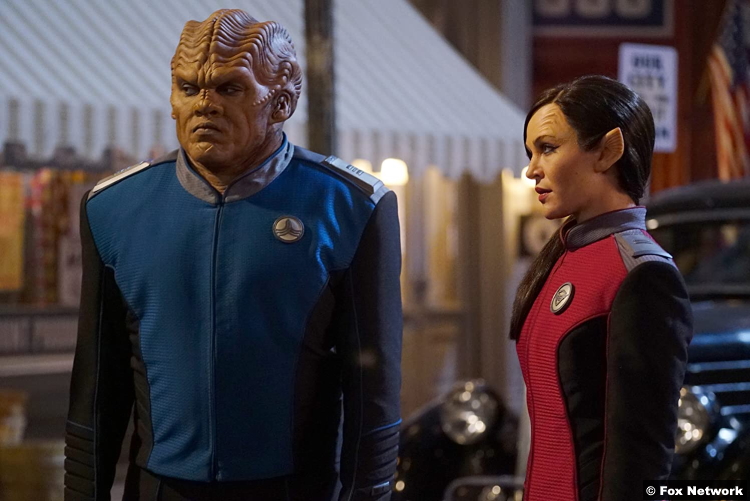 What is it? It’s serializing done right.

Deflectors is another episode devoted to the backward culture of the Moclan people. Presented at first like The Orville’s version of Klingons, the Moclans slowly began to function more like a deconstruction of Star Trek’s most famous on-again, off-again antagonist race. When you think about it, there’s a lot in Klingon culture that really isn’t worth celebrating (Ronald D. Moore’s masterpiece DS9 episode “Tacking into the Wind” offers a great commentary on that very point).

In The Orville, no one celebrates the Moclans…except the Moclans. And if it wasn’t already clear throughout the episode, Mercer makes it clear at the conclusion: the alliance with that race is hanging by a thread. Something’s about to combust and the show has done an excellent job to this point, setting all of that up.

9/10 – A great exploration in the male-insistent Moclan culture, showing once again just how much material there is to mine from such a premise.

After this, The Orville flips a light switch and goes from being a “pretty good” Star Trek spoof, to a genuine, bonafide, “really great” science-fiction adventure, capable of standing on its own mythology and characters.