Although it’s not as dramatic as last week, this week’s episode gets things going with another cracking opening. Without further ado, they’re all inside that mansion and living it up.

Well, Leti and George are living it up, to the strains of “Movin’ On Up” by Ja’net Dubois, the theme song of The Jeffersons. Leti’s having one of those rom-com montages where she tries on a bunch of fancy frocks. George, on the other hand, is curled up in bed with just a fraction of the many books in his room. Atticus, meanwhile, is pensive in his.

If it seems strange, though, that George and Leti are so carefree the night after they saw aaahh!!! real monsters, then there’s a simple explanation. They don’t remember it. But they’re all kind of stuck in an impossible situation. 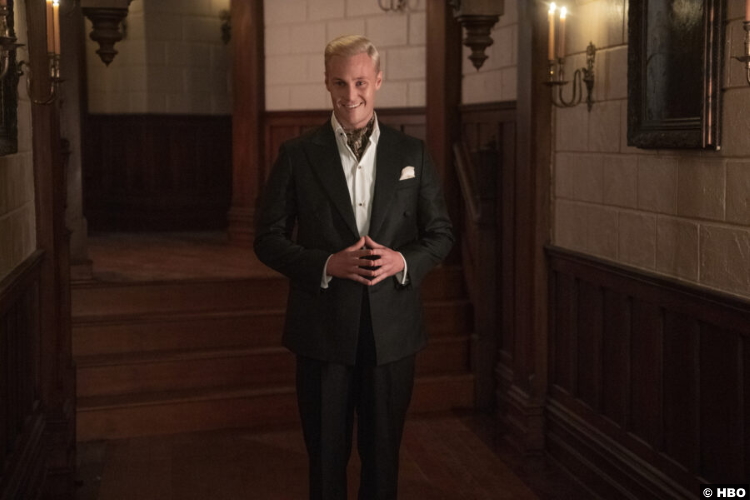 They realize, for instance, that despite the fine trappings, it’s exactly that–a trap. William (Jordan Patrick Smith), the uncanny man who answered the door last week, is nice enough, but there’s still an air of menace around him. And then they meet the actual residents.

The mansion is the ancestral home of the Braithwhites, now comprising Samuel (Tony Goldwyn) and his daughter Christina (Abbey Lee). She’s the one who drives that silver Bentley, by the way. And as it is an ancestral home, they’re only the latest Braithwhites to live there. It was originally built by Titus Braithwhite. You can read between the lines in what William says about him–he built his fortune in “shipping,” his kindness–to figure out that he had slaves and he raped them. In particular, he raped and impregnated a slave named Hanna (Joaquina Kalukango). Hey, like Thomas Jefferson. Suddenly that Jeffersons theme song makes even more sense.

This is important because Titus, like Samuel after him, was a practitioner of magic. He belonged to a magic order, the Adamite Order of the Ancient Dawn or the Sons of Adam. The latter name makes sense because Samuel is obsessed with the story of the fortunate fall. He wants to bridge the gap between time and dimension to enter the Garden of Eden.

However, Titus attempted something like this in his time. It resulted not only in his death but also in the destruction of the original house and everyone in it. Only Hanna, then pregnant, made it out. 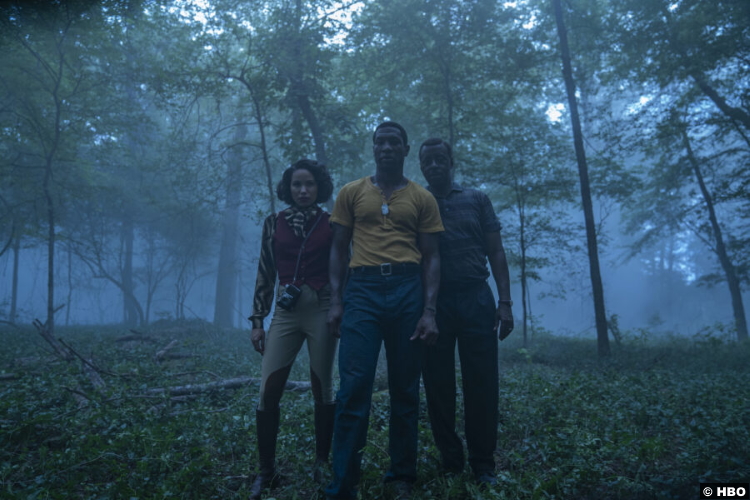 But before we get to Samuel’s big adventure, our trio leaves the mansion to look around the surrounding village. Mainly they’re looking for signs of Montrose, who they do not believe is off in Boston. Anyway, the village is a strange affair, looking like it’s frozen in time. Most of the villagers ignore their presence. The only person who seems to notice them (and dislike them) is Dell (Jamie Neumann), an oddly aggressive dog-handler. 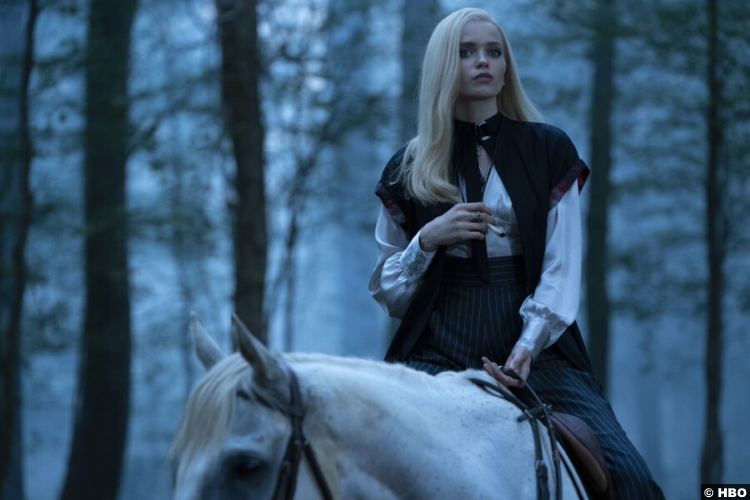 They barely make it back to the mansion, after another encounter with monsters that George and Leti immediately forget. There they’re confined to their rooms, where they each have hallucinations that the order watches like they’re entertainment. Atticus, for instance, fights Ji-ah (Jamie Chung), the woman he apparently left behind in Korea. Leti thinks she’s having a romantic moment with Atticus, until the not-Atticus unzips his pants to reveal a snake. Meanwhile, George is slow-dancing with Dora (Erica Tazel), Atticus’s mother.

All that reading paid off for him, though, as he announces at the dinner that he’s got it all figured out. Through Hanna, Atticus is the only living descendant of Titus Braithwhite. That’s what all of this has been about, luring Atticus there so Samuel can use him. 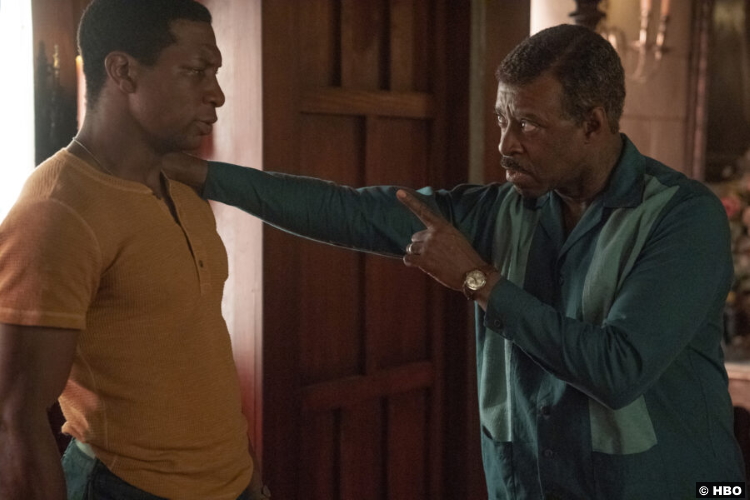 But after Atticus, George, and Leti find Montrose, already in the process of freeing himself, there’s little motivation for him to go along with the plan. So the Braithwhites shoot Leti and George. They revive Leti, but George’s health is now the bargaining chip for Atticus’s participation.

There’s something that Samuel didn’t factor into his plans, though. His daughter, by virtue only of her gender, is excluded from the order. She’s not into that, though, so she sabotages the ritual. Instead of a door to Eden and Adam, it’s Hanna waiting. And Atticus follows her out, as Samuel has already been turned to stone and the mansion crumbles once more.

And all the while, whitey’s on the moon. That might seem like a strange title and/or song choice for this episode–although no stranger than Marilyn Manson’s “Killing Strangers”–but I think it’s apropos. The song itself is a contrast between the real social problems at the time it was recorded and the immense amount of money the government was investing instead, putting men on the moon. With their magical gifts, the Braithwhites could make life easier for a lot of people. But instead, they’re reaching for other planets, seemingly apathetic to the real world and people around them. They’re all just chess pieces the Braithwhites move for their amusement.

So is George, one of those pieces, now fallen?

8/10 – This episode was so jam-packed that I couldn’t find a way to fit in even a semi-major revelation like the fact that George might be (might have been?) Atticus’s dad. But while I liked all that stuff–throw it at me, baby–I think it might have come off a little muddled for folks who didn’t read the book.