It’s common TV wisdom that a character’s not dead until you see the body (and sometimes not even then). Sadly, though, for anyone holding out hope, this episode begins with seeing the body. 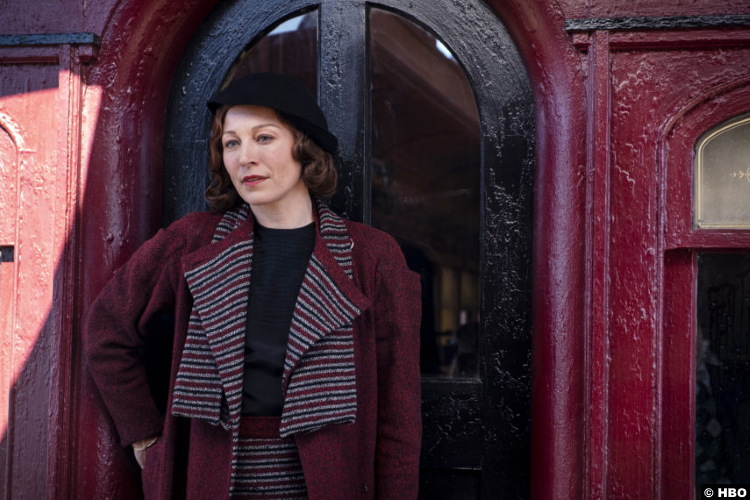 It’s actually Della who sees the body. Arriving at EB’s house, she finds him in the kitchen. With Perry’s help, they transfer the body to the bedroom and air out the place, making it look like, if not a more respectable death, then at least an insurance-payable death.

It’s Perry, too, who helps Della return EB’s body to his family in northern California. And if you were impressed at how much the actor playing EB’s son sounds like John Lithgow, that’s because it is his son, Ian Lithgow. Anyway, Byron Jonathan doesn’t have much love lost for his father, but at least EB was loved by Perry and Della.

Perry leaves NorCal early, though, so he can stop by his ex-wife’s house and see his son. Speaking of love lost, Linda (Gretchen Mol) also doesn’t have much for Perry. I mean, as much as we like him–or at least, as much I like him–I can see her point of view. He does, after all, show up drunk and he doesn’t really seem to spend much time with Teddy (Cooper J. Friedman) while he’s there.

Back in Los Angeles, Sister Alice gets Emily released into her custody. She’s already got a new lawyer, the court-appointed Frank Dillon (Matt Malloy), but it quickly becomes clear he won’t do. For one thing–and a very important thing–he’s not-so-secretly reporting to Maynard Barnes.

So Della starts calling around, trying to find anyone who will take Emily’s case. It’s a hard sell, especially since they can’t pay anyone. But even though they’re low on cash, Pete is now working for the principle of it all. After chasing leads around town, he’s disturbed by how often and how quickly Ennis made it to each of the crime scenes related to the Dodson case. Ennis also tries to buy Pete off (with a sex worker), which hilariously offends Pete. (I say “hilariously” because of how rough around the edges Pete usually is.) 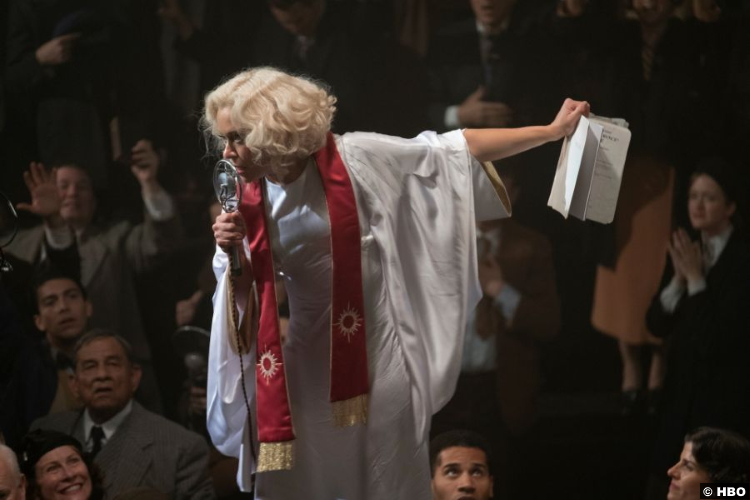 Paul Drake is also getting his daily share of offense. On a beach trip to Santa Monica, on a nearly empty beach, a white policeman tells the Drakes and their friends that they have to leave. The beach is closed due to overcrowding, you see. Even Drake mentioning his employment doesn’t matter. (Also, please note how nicely everyone is dressed for their day at the beach.)

Meanwhile, Sister Alice almost can’t be offended, even when receiving letters that say they hope she’s eaten alive by ants. She charges full steam ahead into her new mission as a healer. Her first poor soul is a man in a wheelchair, whom she basically bullies to stand up and walk. He is very obviously not “healed”–I kept waiting for him to topple into the audience–but it plays well for her congregation. 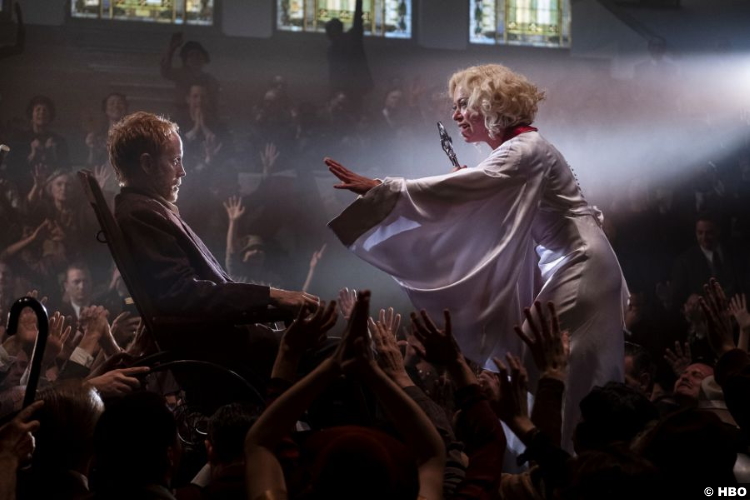 It also plays well with Emily Dodson, whom Alice takes on a clandestine trip to little Charlie’s grave. As she sobs into the dirt, she asks Alice if they’ll need to dig up the boy for the resurrection to work. Alice pointedly does not answer this question. Wait, I have a lot more questions, though.

Not the kind of questions that Perry has, though, when he finds Dillon in EB’s office, sitting in his seat. (The office is rented until the end of the month.) Della’s kept most of the pertinent case files at her boardinghouse, but they’ll have to give them up eventually.

After chasing out Dillon, Perry visits Della. Something in his drunk yet fiery speech about Emily’s innocence inspires Della and she realizes she’s found Emily’s lawyer. Forging a letter from EB attesting to Perry’s status as EB’s apprentice, Della also enlists a deputy DA, Hamilton Burger (Justin Kirk), to help Perry cram/cheat for the bar exam. Burger, incidentally, wants Barnes’s job. (Also, fun fact: You do not have to go to law school to sit for the California bar.)

And after Emily accepts, and without so much as a montage, the next time we see Perry, he’s taking his oath as an official attorney. “So help me God,” the oath reads. So help him, God. And someone tell Paul Drake that there’s an opening for a private detective.

9/10 – For those viewers–none of you lovely folks, but elsewhere–who complained about this being an origin story, well, the origin is over. The age of miracles is here and Perry Mason is now the attorney we fondly recall. Well, almost. And as always, basically, what a great episode.