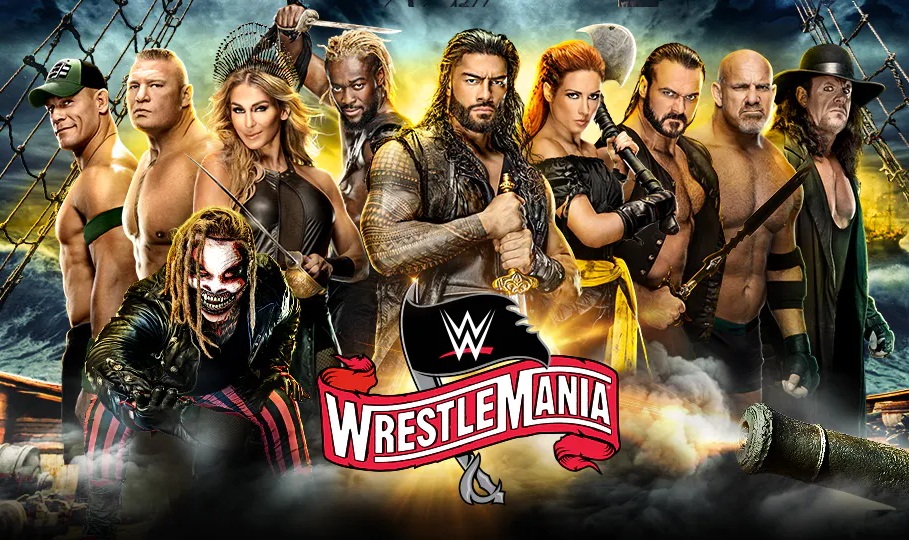 What is it? A bathroom break five minutes into the show.

Do I care? Please.

Will it be good without a crowd? Elias’ entire gimmick is based around a call and response from the crowd. Corbin’s whole shtick is (1) being booed by fans who think he’s a waste of TV time and (2) pretending that means he’s an effective heel. If this lasts longer than one minute, both guys are going to be badly exposed.

Who should win? Elias, but only because I simply can’t envision a scenario where “Corbin should win” is a reasonable statement. Hopefully this is over mercifully quickly.

What is it? Five minutes to remember the women’s tag title still exists.

Do I care? If Vince doesn’t why should I?

Will it be good without a crowd? Yes. Everyone can work well enough and no one has a character that’s only over because of a particular crowd-engaging gimmick. This will probably be a fun little match.

Who should win? Alexa and Nikki, if only to give the titles a new home and maybe some new life.

MIZ & MORRISON vs THE NEW DAY vs THE USOS

What is it? What could have been a sleeper match of a normal WrestleMania show. Instead, it’s a match cut because Miz is sick.

Do I care? Well not anymore.

Will it be good without a crowd? Presumably this will be some kind of a single’s match, possibly involving a ladder. Maybe it’ll be a triple threat. It’s really all up in the air. My interest solely depends on if the New Day have something creative planned or if they’re going to pander to an empty arena and just make the whole thing awkward. Wrestling without a crowd is like an 80’s sitcom without a laugh-track, and the New Day need that studio audience more than anyone else. In the end, though, I think, much like Edge vs Orton, this will probably end up a “should have been great” match, and that’s it.

Who should win? Anyone would be fine, but I’m inclined to say Morrison retains on behalf of his team, since nothing really matters until we start running live-audience shows again.

What is it? Wrestling.

Do I care? More than anything else on this card.

Will it be good without a crowd? It would be good on Mars.

Who should win? Me, by watching it. Thank goodness this is a two-night WrestleMania. The more the merrier for matches like this!

What is it? A classic “big name superstar vs big name superstar” WrestleMania-feeling feud. It’s the kind that has weeks of buildup, a great hype video, and a twelve-minute allotment for the right level of entertainment.

Do I care? Yes, but less than I do the Zayn/Bryan match, although this is considered a more important contest.

Will it be good without a crowd? Yes for the same reason Zayn/Bryan will be. These guys have wrestled in enough high school gyms to know how to work a match without a crowd.

THE UNDERTAKER vs AJ STYLES

What is it? Night two’s gimmicky spectacle match.

Do I care? AJ is one of only a few guys who could get a good match out of Undertaker in 2020, but that’s not saying much.

Will it be good without a crowd? It will be as much of a fiasco as the Fiend/Cena match. If that manages not to royally disappoint, there might be hope for this “Boneyard match.”

Who should win? Undertaker, because why bring him back to WrestleMania if not to win?

What is it? WWE’s attempt to spike an AEW-killing rating on NXT.

Do I care? No, and judging by AEW’s ratings, neither does anyone else.

Will it be good without a crowd? Probably not. Rhea is inexperienced and Charlotte is overrated. Hot take prediction: She’s going to be exposed in a big, extended match without a crowd.

Who should win? Rhea because I can’t imagine Vince will send Charlotte back to NXT on a permanent basis and risk her being exposed as a negative-draw in the fight against AEW.

What is it? The main-event. The coronation of a new champion.

Will it be good without a crowd? Yes but like so much else on this show, I will end it wondering “what if.” Brock is great no matter what the environment, but he’s got a rare talent at working a crowd. Drew was someone everyone was ready to get behind, too. It’s a shame his big push coincided with the industry basically folding up shop. Hopefully we revisit this match down the road when all this quarantine is behind us.

Who should win? Drew, obviously. You don’t mess with a coronation, no matter the extenuating circumstances.

Here’s to the weekend!