“The Tower” couldn’t possibly have succeeded in delivering what Season 10 deserved from its finale. It wasn’t supposed to be the last taste of post-apocalyptia we’d get before Season 11 rolled around, but COVID-19 shut down production and it’s what we got. The episode would have been great in its original, penultimate placement. Much of the wrap-up we needed from last week’s chaos and Michonne’s departure takes place, but there’s very little spectacle to the episode. Princess does her best to give us a memorable episode, but the explosive story falls flat. All things considered, “The Tower” does as much as it can to serve as a last-minute finale. Kang promises we’ll get the proper ending later this year. Here’s hoping the cast and crew will be able to give Season 10 the capstone it deserves! 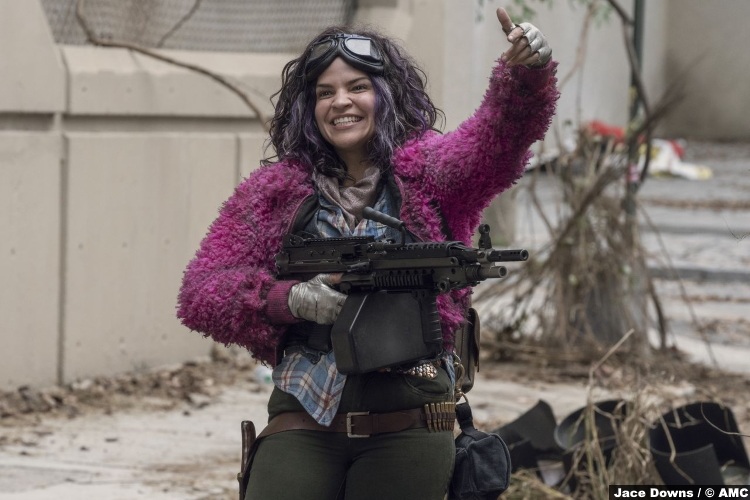 Much of the episode centers on Princess – a well-armed eccentric living in the ruins of some city (it’s Pittsburg in the comics but unclear in the show!) where she’s staged some walkers for company. After promising to prove her worthiness to our ambassadors’ cause, Princess promptly scares their horses into a minefield. Yumiko takes the predictable, antagonistic stance while Ezekiel does his best to justify the inevitable addition to their party. Eugene doesn’t get much action here. I’m disappointed to see his particular brand of eccentricity paired with another overwhelming personality. His willingness to forgive and move on makes his muted presence in the episode enjoyable by the end. If Princess is going to continue to dominate this plot group’s storylines, we’re in for some incredibly dull writing ahead. 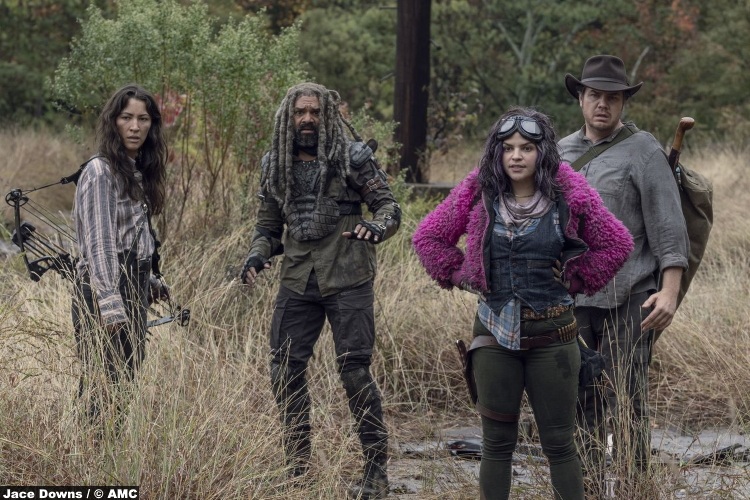 That said, “The Tower” does a great job giving us reasons to like Princess. The dreary heaviness of the season’s end lifts every time the purple-haired loner is on screen. Her introductory episode rightly gives her a lot of time to make a case to fans. The Walking Dead hasn’t had a true wildcard in quite a while. Princess adds a playful dose of chaos to the narrative and I hope she becomes more of an accent to our more established characters’ journey. If she takes center stage or serves only to justify whatever quirky diversion the writers need to extend the meet-up storyline, I’m going to start wishing for a swift and unceremonious death.

After Yumiko does her tsundere thing and Eugene puts the cowboy hat on for a quaint “we all suck sometimes” speech, the group departs on bicycles hoping to make their meeting in time. If trailers are to be believed, they won’t have an easy time of it. Translating Princess from comic frames to TV shots will be a fun challenge for a writer’s room increasingly committed to making the series feel more like its source material. Fans of the heavier ‘realism’ might struggle to welcome Princess. Fortunately, “The Tower” isn’t all about its lonely princess. 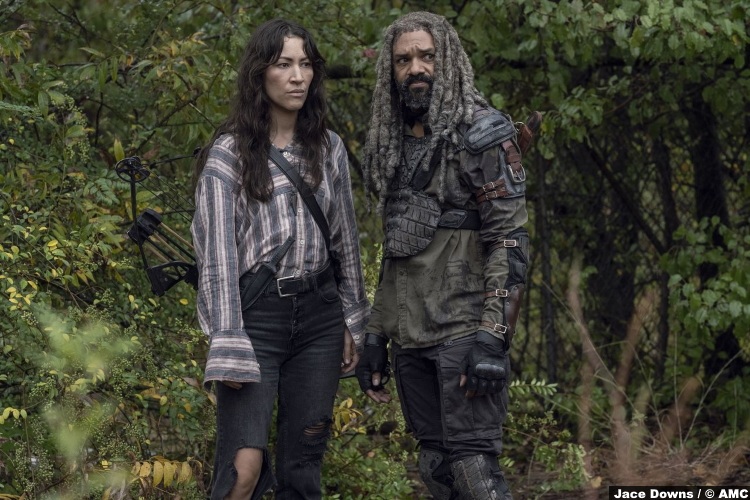 Beta dominates the remainder of the episode’s screen time. Merging with Alpha seems to have finally disrupted what cohesion was left in Beta’s mind. He now hears the horde speaking to him and his violent outbursts are causing other Whisperers to break off. He marches on Oceanside but eventually discovers the hiding survivors in their tower. The scattered scouts are trapped by Walkers while Daryl and Judith plan some kind of escape. This is obviously the setup we’re supposed to be hanging on the edge of our seats for. In an ideal world where next Sunday would be the follow-up, I’d be right where I’m supposed to be. Instead, I’m a little bitter. There’s nothing to be done about it, no real criticism I can levy against the producers or cast. The Walking Dead is a lesser casualty of the global pandemic and I have no doubt that “The Tower” will have a higher score in retrospect. 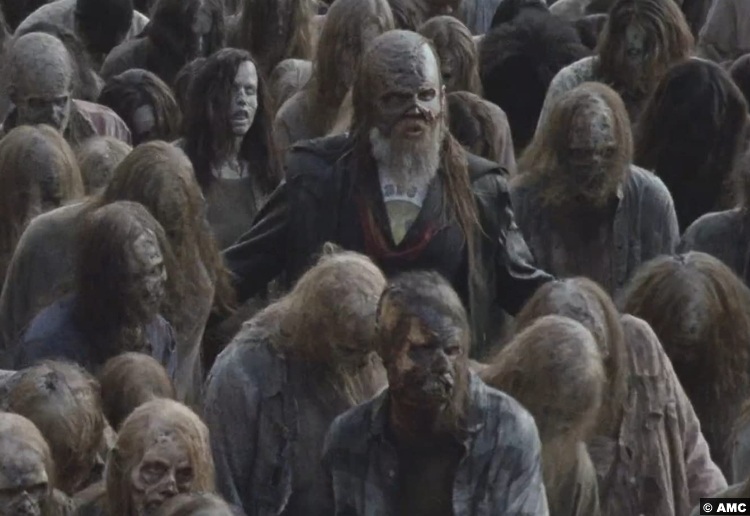 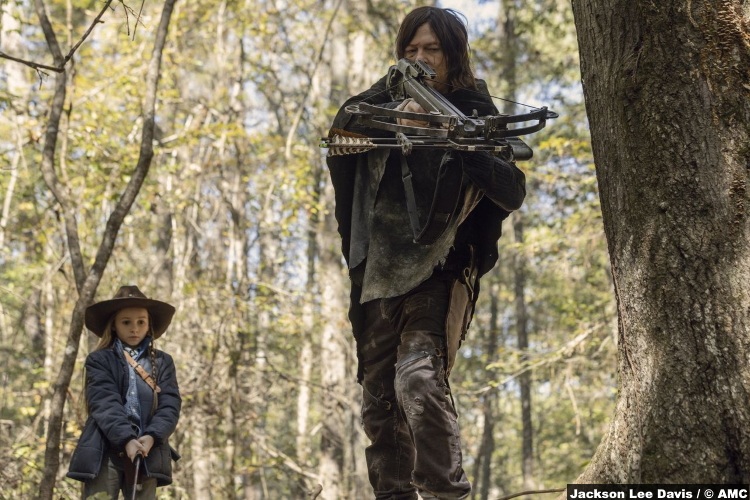 Kelly and Carol’s conversation about the importance of intent won Kelly my heart. Her compassion and optimism sprouting from her hearing loss gives Kelly’s insight on Carol’s own losses and struggle to continue onward advanced a story I feared would take ages. Carol finds certainty that she belongs with the survivors as their lone wolf – the one who does what only she can do. I dream of a Carol who sees herself as the mother of a civilization rather than just tragedies. Kelly planted a seed I hope continues to get the screen time it needs to really flourish. I want more scenes between the pair, hopefully with a little more from Carol next time.

In the end, “The Tower” doesn’t give the audience much to chew on. The meatier scenes justify the runtime but without a follow-up next week, I can’t get the bitter taste out of my mouth. No matter how juicy the promised finale looks now, the appetizer came out too early. Instead of wetting my palate, I’ve got an appetite that can’t possibly be sated. With time to reflect and a finale to put it into context, “The Tower” might find a place among the better episodes of Season 10. As it stands now…

6/10 – “The Tower” does as much as possible to deliver a satisfying pause point while the COVID-19 pandemic finishes its rampage. The episode successfully introduces a new character and wraps up a few plot points, but the tension it builds fails to build suspense. Knowing the release is so far out turns the drama-fuel into a slippery mess, with storylines scrambling to get enough time to sustain themselves before hiatus.