Well, that was…a lot. Roswell, New Mexico is usually a pretty straight-forward show, but this week’s episode is certainly a deviation. I’m not even sure where to begin.

I think this tweet from an anonymous beautiful werewolf sums it up:

this is the perfect #RoswellNM episode for 4/20, because it is making me feel WILD smacked

It reminds me a lot of the OG Roswell episode “Heat Wave,” in which the rising temperatures make everyone act a little more PG-13. This time, it’s meteor showers, though, that have everyone acting up. I’ve never actually heard of that, but it’s not beyond the realm of possibility, at least in fiction. In the Frequency movie and series, for example, an electrical storm bridges time. So sure, I’ll play along with this. 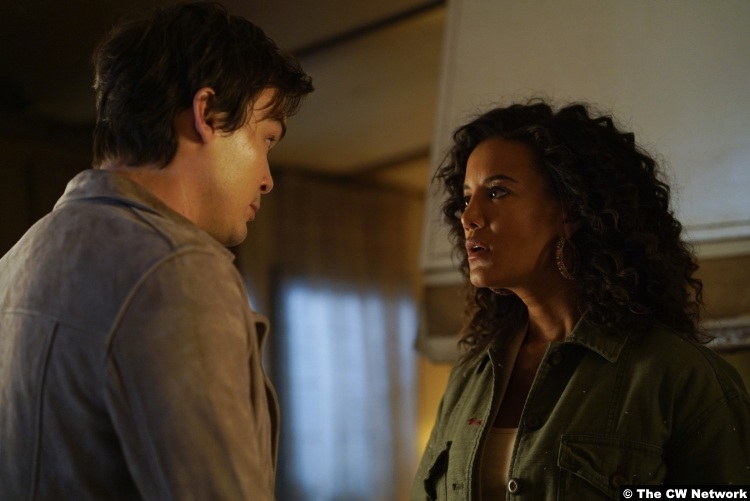 First up, there’s Max and Liz, who seem like they’re going to be the most out of kilter. After all, last week’s promo for this episode pretty much revolved around Max greeting Liz with a “And you are?” But post-comatose Max is a lot more to-the-point than he used to be. He’d know better than anyone that life is short, though. So he asks out this mysterious young lady. And although it seems for a bit that he won’t be remembering her any time soon, the slug he pulled out of her chest sparks something. He remembers enough.

And then there’s Isobel’s and Kyle’s respective and collective storylines. They both find themselves and each other at a gay bar, which is celebrating the meteor shower. Am I the only one out here who is not treating them like a national holiday? I mean, I drag a blanket out to the yard and watch them, but I didn’t know all this was involved.

Moving on, Isobel ends up canoodling with the bartender, while a glittery-faced Kyle returns to the hospital. He’d talked with Steph in the operating theater, who ended up leaving after what seemed like Kyle’s clumsy attempt at flirtation. But then when he returns, she’s the one being operated on? I don’t know; this whole episode feels like I kept napping through it and I have to put the story together. (Note: To be clear, I saw the whole episode. This is just what it feels like, hence my tweet.) And that brings us to Alex and Maria, who have, at first, what seems like the most “normal” storyline. (And that ain’t saying much.) Anyway, when Mimi returned from…wherever she was, she was wearing some very bold turquoise cowboy boots. Maria didn’t recognize them and after looking into them, found out they’re custom-made by a localish tradesman. So Alex accompanies her out to the guy’s homestead.

If she found him just by poking around in Roswell, then why couldn’t she just contact him from ther–oh, we’re at his house already. Travis (David Anders), the bootmaker in question, is…how can I put this? Eccentric. That’s a good, all-purpose word. And he goes from unhelpful, claiming not to remember anyone who buys his very flashy boots, to cagey to homicidal within like, minutes. Yes, Maria and Alex are acting suspicious as hell and poking around the man’s house, but that’s no cause to start singing “I Think We’re Alone Now” and trying to murder people.

But Michael somehow shows up, claiming he saw Maria’s truck–is he tracking her?–and saves the day. If the whole adventure wasn’t weird enough, then just buckle up, honeydew. Because that wasn’t Travis, it was actually his twin brother who’s had Travis locked up in a shed. Thanks to the distraction from Alex and Maria, the real Travis was able to escape. (I actually screamed an expletive when Real Travis showed up, thinking there was alien tomfoolery about.) There’s a reference to a “paramilitary” group, though, and I wonder if that’s the same group that went after Jenna’s sister. 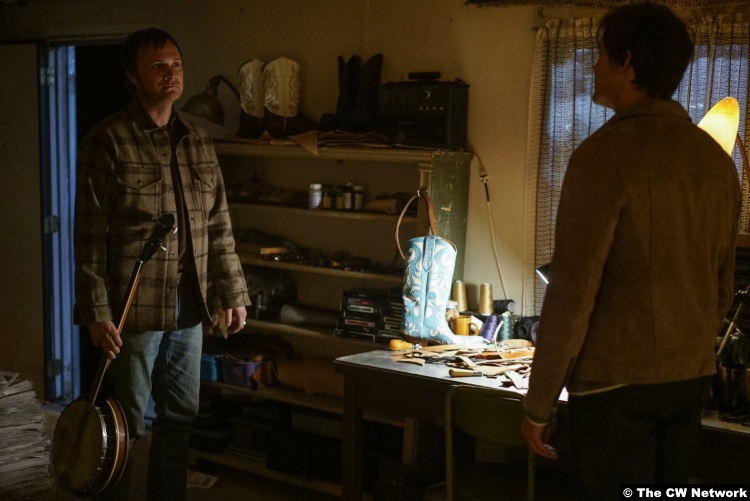 Oh, and Liz finally told Max she loves him. And that’s great and all–love y’all, too–but he’s started having weird flashbacks (?). Is that little boy him? Or is it Noah? Or is it something yet to come?

⌇⟒⎐⟒⋏ ⍜⎍⏁ ⍜⎎ ⏁⟒⋏/10 – I have no idea how to begin to approach grading this, so I’ll just do it in alien. Sunday night, my recording of Zoey’s Extraordinary Playlist was preempted by the local channel giving a weather update. They began the episode where it was already in progress, so that I had to put together myself what had happened so far. That’s the same feeling I had watching this episode. It was one wild ride. Outside of that, the Max and Liz scenes were very sweet, as were the early scenes with Alex and Maria. I hope Alex starts something with Forrest, though, because he deserves better than what happened in that trailer.