“Morning Star” successfully brought us to the battlefield. The fight scenes we get are fairly tame and exhausting, tired strikes at tireless enemies. A solid 40 minutes of character plot progression almost feels like a different episode by the time we finally get to the night siege on Hilltop. They set me up to make this review nothing but Daryl/Carol commentary and while I’ll do my best to resist, fans of the OG pair will have a lot to enjoy in this episode. The 11th of the 10th Season didn’t dazzle me half as much as the last two episodes did, but it made me care about a fight I thought I wouldn’t. 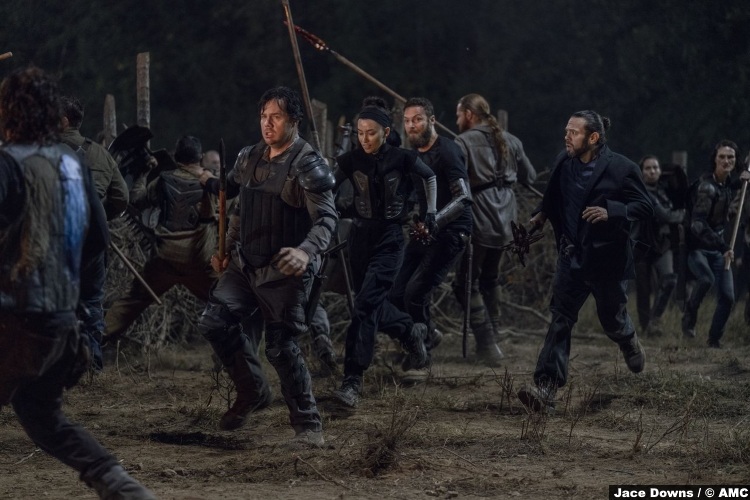 That’s really what this episode accomplished that some of the other, slower-paced episodes failed to achieve. There’s a gravity to every choice we see the characters make on screen. It’s easy to write good drama when you’re on the eve of battle, but that doesn’t make it any less satisfying to watch and soak in. The deadman’s pact between Ezekiel and Daryl, Carol’s desperate need to be hated by someone else as much as she hates herself, and some of the newer characters getting to stand out justified much of the episode’s pacing. After last week, I figured we’d open mid-battle. I did not expect a Eugene-heavy plot that I actually enjoyed.

If Eugene were a 12-year-old, his giddy phone calls with his long-distance girlfriend from another state might be a little more interesting. I guess without Tinder, post-apocalyptic dating takes on some more antiquated traditions. Hell, it’s Eugene serenading over a pre-battle montage that gets “Blue Evil” back on the radio chatting. I can’t stand that Eugene is written like a Gilmore Girls character but with less charisma. I hate his weird sexual tension. I hate the ponytail too! But I did love the way this whole scenario played out and Eugene’s “Let’s get this over – I got a date!” was perfect. 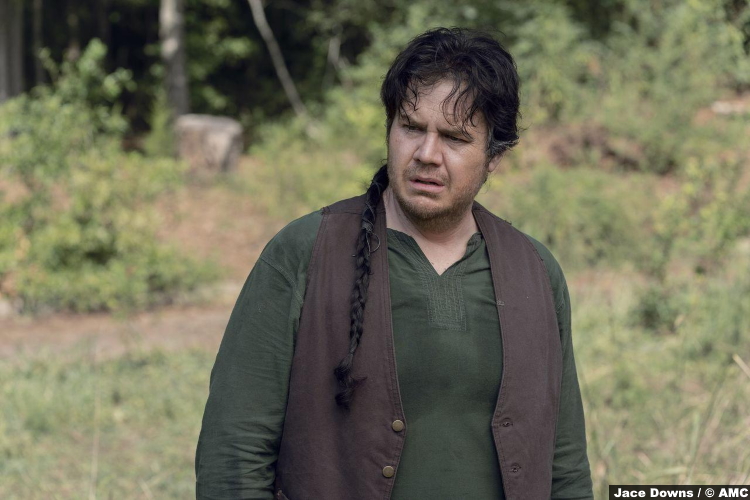 I appreciate the necessity of building the secondary characters into leads, but I really wish more of the season had been built to do that. Most of the characters built up were killed off or swapped sides. Eugene and Rosita both get to develop and progress in their narratives. Eugene’s is more obvious, but Rosita is able to be supportive and empathetic. She’s inspiring and pushing to help a friend. For the weird characterization we’d gotten from the first half of the season, this return to a more likable form is great for her. Other characters got a few moments too – Kelly, in particular, stands out.

She doesn’t actually do much in the episode. There’s no plot point where Kelly is central or even really triggering things. Instead, Kelly bridges some of the conversations. She’s being made to have a stronger, louder voice in Hilltop and I like it. When the battle lines are drawn and Kelly drops to the ground, feeling for the approaching horde – it’s so cool! Magna’s group still feels out of place and the supply caches remain an unpleasant memory of the season’s many unnecessary lines, but I never felt uncomfortable with how she and the group interacted. I’d like to see more of Kelly – her personality and direct attitude are welcome changes to the angry yelling and somber staring.

Somber staring brings us to my two favorites: Carol and Daryl. Their scene in the graveyard before the fight, where Carol stands behind him and asks if he hates her. His answer, in a loving, betrayed, sorrowful look, affirms that he will never hate her. I’m not sure if Carol’s sobbing is from relief or terror. Relieved that someone still believes in her goodness or terrified that someone still does. This comes after her asking Lydia to hate her. She refuses as well, instead reminding the sorrowful mother that even after Carol kills Alpha, Lydia’s mind will be elsewhere. Carol’s continuing self-destruction forces the viewer to love and hate her in equal measure. Every time she swats a helping hand or discards a kind word, I am forced to reckon with a very difficult question: which of them would I be? 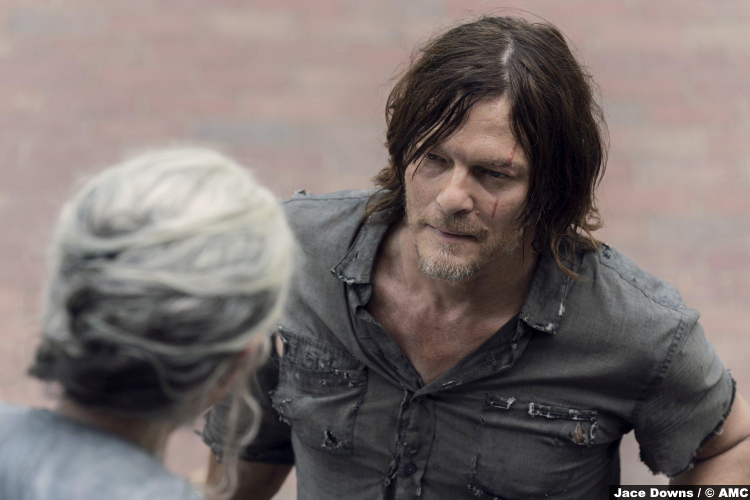 Daryl and Carol endure the bulk of the plot’s heavy lifting entirely because both characters are painfully realistic. Daryl keeps himself distant, even in his most affectionate moments. His compassion and love are restrained by necessity and the heavy past he carries. Carol went in full force and while she says it’s just her sense of humor lost in Kingdom, far more burned up. Practically every season seems to center around some kind of brutal loss for her. Truly, I think it’s Carol’s unwillingness to abandon the others that she hates most about herself. In my humble, Daryl and Carol show us what survivors of this kind of trauma do. They dedicate themselves to protecting something outside themselves or to destroying something inside. 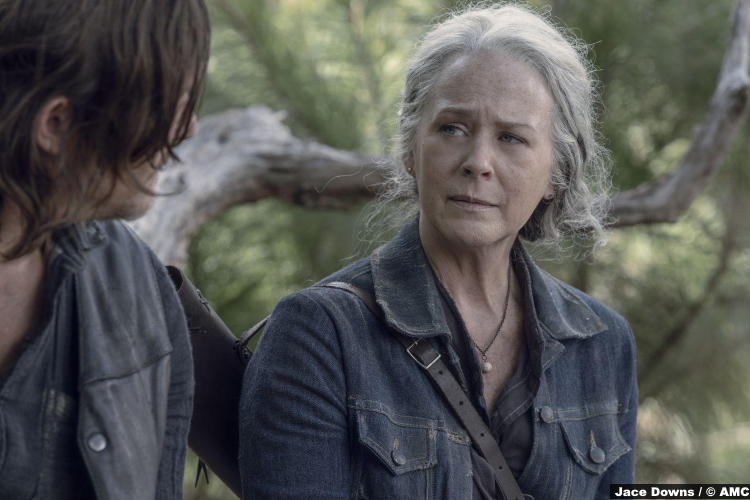 While everyone else in this world has endured as many horrors or more, we didn’t see all of it. For the viewers, each new addition to Alexandria or Hilltop is a fresh character. They often seem unchanged, like they were held in cryostorage and awoke in the apocalypse. Naturally the series crushes their lingering humanity as much as possible, but when it comes to Daryl and Carol, we’ve watched them lose everything and keep fighting. That’s what makes Daryl’s pact with Ezekiel – that if either should die, the other would immediately go to escape with the children – so incredible. Daryl isn’t fighting to beat the Whisperers or to exact vengeance. He’s doing what he said he wanted to do when he tried to lure Carol away on his bike.

Daryl Dixon is protecting the people who he can. Carol, I think, is trying to do the same.

The actual battle at Hilltop ends with the Whisperers setting fire to the city and its defenders. Negan appears to be behind the scheming and with Alpha and Beta out among the walkers, the fight promises to be worth watching. Daryl’s departure from Carol to the battle line gives the episode its name. But I also wonder if the Morning Star here isn’t a reference to Lucifer –  a fallen angel now twisting minds and bringing death. Hilltop knows Negan is on the other side and knows full well what kind of monster he can be. Whether it’s the weapon or the traitor the title is calling out, I’m excited to see what happens when Hilltop burns and its defenders scatter.

7/10 – Not quite as dazzling or visually compelling as the previous two episodes, “Morning Star” continues the trend for this half of the season. It’s a tightly written episode with meaningful character development and continuing preparation for the inevitable departure of major characters. I can’t call out any one moment for being spectacular, but I can say the spectacle kept me engaged and emotionally invested for the episode’s entire run-time.