On one hand, “Stalker” is an incredible look at the artistry of The Walking Dead’s staff. On the other, the episode struggles to sustain itself without homage and the stellar performances of Samantha Morton and Norman Reedus. If you’re looking for a reason to not like the brutal violence on screen for most of the episode, “a ramshackle bridge” might be how I’d describe the episode. It serves to connect the refined mid-season opener and what teasers suggest will be a showdown finally. However, fans of slasher flicks and some overly dramatic acting from lead talent will agree with me: this bridge sure was fun to cross. 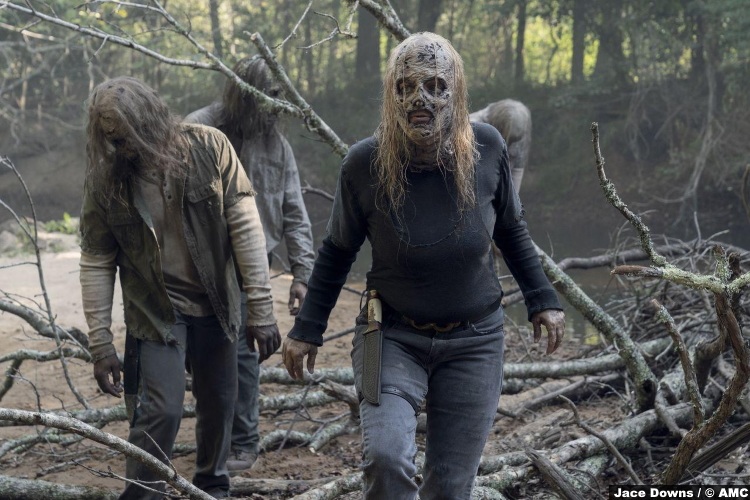 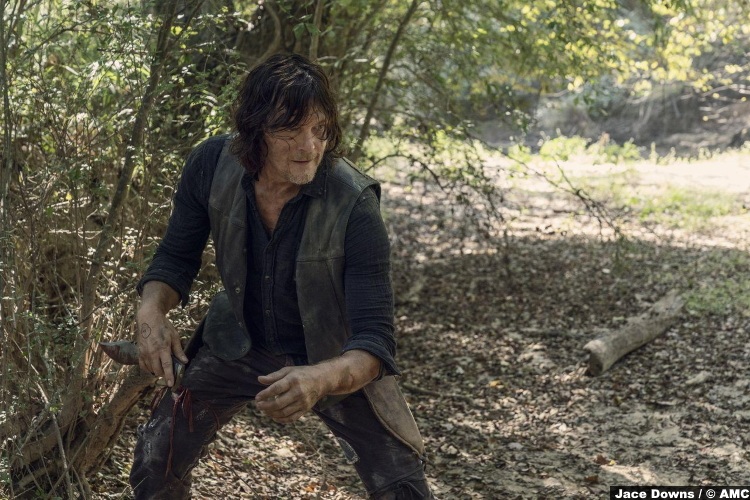 The episode’s plot is largely divided between Rosita and Gabriel’s processing of Mary at Alexandria and Daryl’s fight against Alpha. The latter is the simpler of the plots – to be honest, it’s the only element necessary to the overall plot of the series. Much of what we see in Alexandria really centers on Beta reprising his role as Michael Meyers and brutalizing the armed-denizens of the city. I think the developing complexity of violence in Gabriel and Rosita’s relationship is fascinating. Her prophetic dreams are a fun little nod to the magic that governs character development in this world. I’m also pretty sure Gabriel handing his hat off and Rosita holding it more like a sheriff than a man of God’s didn’t go unnoticed.

“Stalker” succeeds in being satisfying filler. The actual plot elements can be summed up fairly quickly. Alpha sends Beta to find Mary and bring her back. Alpha ends up fighting Daryl and they’re both severely wounded. Lydia refuses to kill Alpha and Alpha now promises to unleash hell on the settlers. None of this relies on any sort of twist. There’s no important dialogue you need. For all the plot movement we got in the last episode, I expected a little more movement here. Instead, “Stalker” was all about flavor. 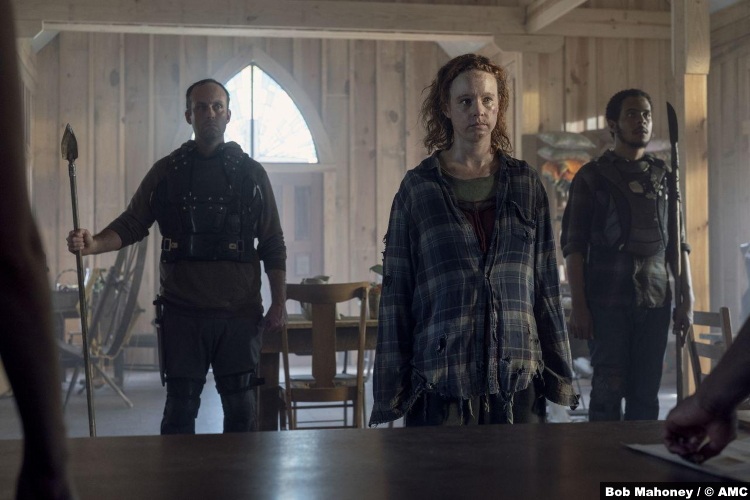 Morton and Reedus get far more screen time than even their talent can sustain. The beginning of their arc has all the bloody gore you’d expect but the rest is a lot of close shots of sweaty actors and syrupy blood. They deliver great speeches and I have no doubt both would do incredible on stage. If this were a slower episode or their exposition wasn’t cut between scenes of brutal murder and Judith coming for Jamie Lee Curtis’ job, it would have been super effective. As it played out? They should have at least splurged on good fake blood.

What matters here is the writers have once again drawn a line in the sand. This season gained another clear, defining theme: “your way is not the only way” carved with a bloodied knife left for the mother she refused to kill is pretty hard to ignore. Rosita is questioning the brutality and psychological violence Gabriel wants to bring down on the Whisperers while Daryl’s hope for a more peaceful way forward finds new blood in Lydia. These story beats are fairly quick. There isn’t a lot of time devoted to these beautiful bits of plot but they’re quite effective. By the end of the episode, I care about Rosita’s choice to introduce herself to Mary and I believe Alpha when she’s telling us the Whisperers truly are the End of the World. 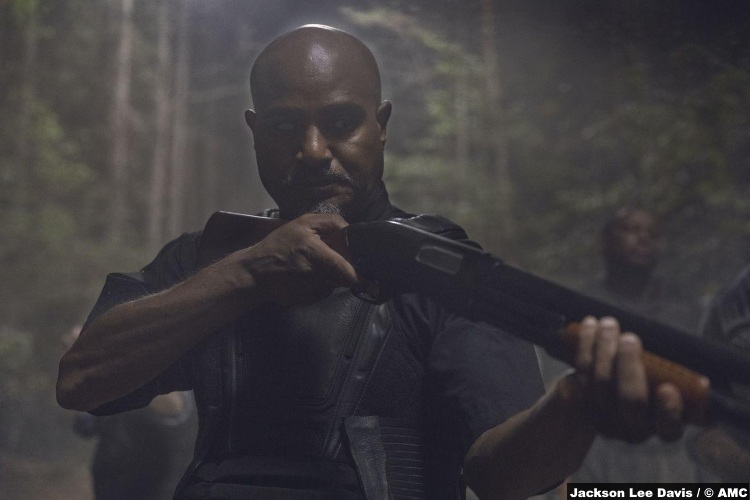 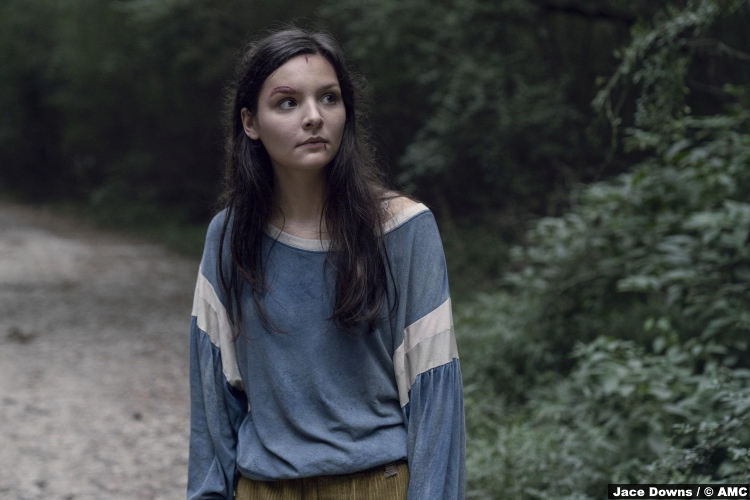 All of this is nice and makes for a slightly above-average episode of TWD. What wins my heart is Ryan Hurst’s show-stealing performance as a slasher killer. I would honestly sit down and watch him brutalize different people every week. It opens with him rising up from Dante’s grave and then whipping out two giant knives?! WHAT?! Are you allowed to do that?! Can we be that transparent and cool at the same time? He sneaks into the house while hapless victims, armed and readying for battle, mock the threat. The audience watches over their shoulder as he snuffs out the light and then we cut to the street, passing down “Everywhere, USA”’ Main Street. This episode was shameless and naked in what it tried to do. It’s in the damn title! 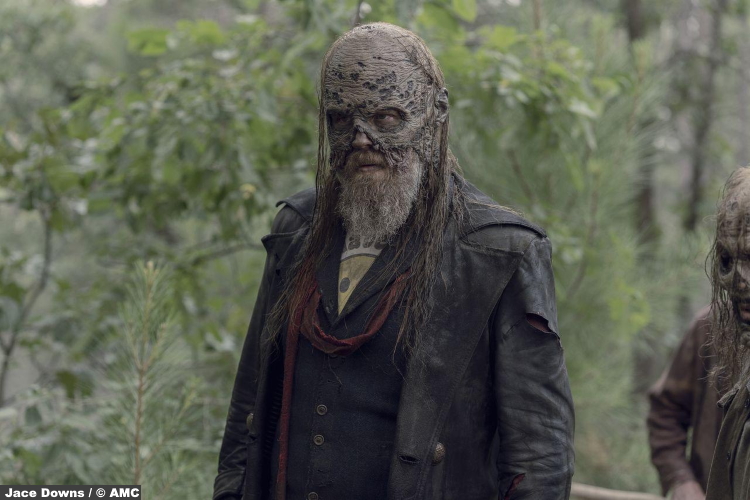 “Stalker” belongs in amateur film courses. Hurst’s performance doesn’t do anything new. Beta has always been a terrifying, hulking monster. He’s what everyone imagines each Whisperer to be and what each of them should aspire to be. The acting doesn’t aim to go beyond the role. Instead, I almost found myself believing I had just witnessed dozens of brutal murders. I looked at a true psychopath sit and center himself before his now-silenced slaughter bench and felt genuine fear. For how often he’s been overshadowed by Morton, giving Hurst the screen time to indulge himself as a performer and showcase the character felt like a great investment.

The payout leaves us heading into next week with a horror flick monster on the loose, a total loss of any sort of normalcy, and the apparent destruction of Alpha’s humanity. Whatever happens from here on, I will likely take pride in my contrarian opinion that “Stalker” is my favorite episode of the season. I can’t ignore how much better last week’s episode was in terms of its technical execution and the much-needed dose of energy it gave to the plot, but “Stalker” tickled an itch I can’t overlook. I am unapologetically biased and will happily fight any of you in the comments section.

9/10 – “Stalker” doesn’t quite clear last week’s bar but it does create a fun bridge between major bursts of plot movement. Beta makes every second he’s on screen a terrifying encounter with 80s nostalgia. Some of the technical work leaves something to be desired. The writers chose to take a filler episode and give some room for a heavy bit of seasoning. The episode gave flavor to characters who badly needed it, especially the show continues positioning them to be our main characters going forward.