As I mused last week, even though we know that Joshua inadvertently killed Tiffany, there was still a major question. Where did he get the poison? Well, we find that out this week in another semi-shocking revelation.

But first, it’s Harbor Day! As I’ve said, I love town lore, so I was thrilled to get another piece of it. This week, we learn that a ship was supposed to dock in Virginia, but a storm pushed it way off-course and the ship had to make land in Maine. (That’s where we are, right? Right.) Supposedly, a malevolent sea spirit–love it, go on–called Aglaeca was responsible.

So, every year, Horseshoe Baygles–I’m doing it for you, Ace–celebrate the town’s founding by asking Aglaeca for a wish. Sure. It all seems like a scary story you tell the kids, though, because none of our Baygles ever got their wishes.

Maybe it’s because they weren’t asking Aglaeca the right way or for the right things. Maybe it only counts when it’s serious. After all, your eyes bleed if she grants your wish, so it seems like the mean ocean lady is a real stickler for rules.

Anyway, before we get to what the grown-up Baygles ask for, Nancy is back to her cases. Her dad’s evidentiary hearing is coming up soon, so she’s got to have something that will prove he wasn’t responsible for Lucy’s death.

The security camera from the garage isn’t much help–Joshua appears to get up off the electrical wires and then disappear into a closet. So she goes back to tracking down where he got the poison. To do this, she, Ace, and Nick go to the police station, where Ace’s dad lets them pore over his old files.

Once they find out that the poison had to be moved–because an evidence fridge malfunctioned–Nancy’s on the scent. It should probably be troubling how easy it is for them to just get in the evidence room and rummage around, but I’ll go with it. This police station seems to be very loose. 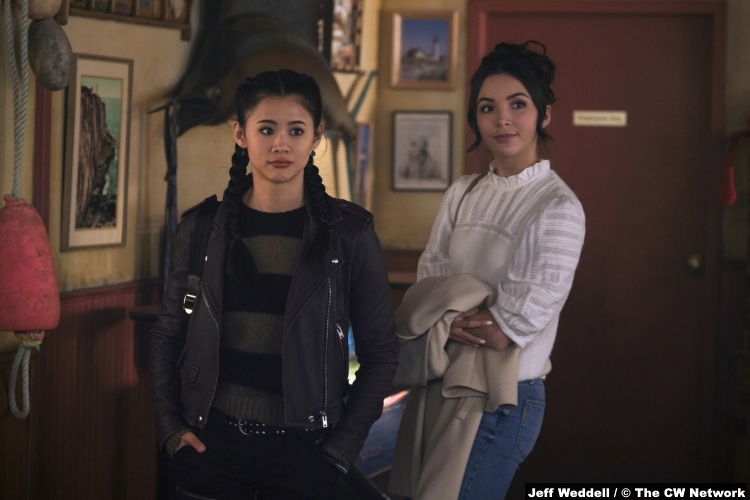 After all, where is the Chief? His conspicuous absence reminds me of how they try to cover up pregnancies on shows sometimes by having an actress always wear a big coat or whatever. (Keri Russell once carried in the world’s largest salad bowl on The Americans, for instance.) Anyway, they keep mentioning him like he’s in the next room, but he’s clearly not.

But you know who is there? Detective Karen. After seeing her name on the work order for the fridge, Nancy realizes that she swapped out the poison for Joshua. Apparently, she believed that Ryan killed Lucy, her high-school best friend (remember?), so she wanted justice.

And then she arrested her boyfriend for Lucy’s murder after reading his teenage daughter’s diary? I mean, I guess. Anyway, Karen is led away in cuffs after this, obviously, because she aided and abetted a murder. (And that also happens after Ace downs the vial of supposed poison in evidence, proving that it’s really water, terrifying his father, and showing what an amazing friend he is.)

But just because it seems that Nancy’s put the Tiffany business to rest doesn’t mean that she’s finished. She still has the very pressing matter of Lucy Sable hanging over her. And I don’t just mean that it’s pressing because of her dad, I mean that Nancy is now spitting up teeth and seeing visions of bones. The obvious conclusion is that Lucy wants her body to be found. 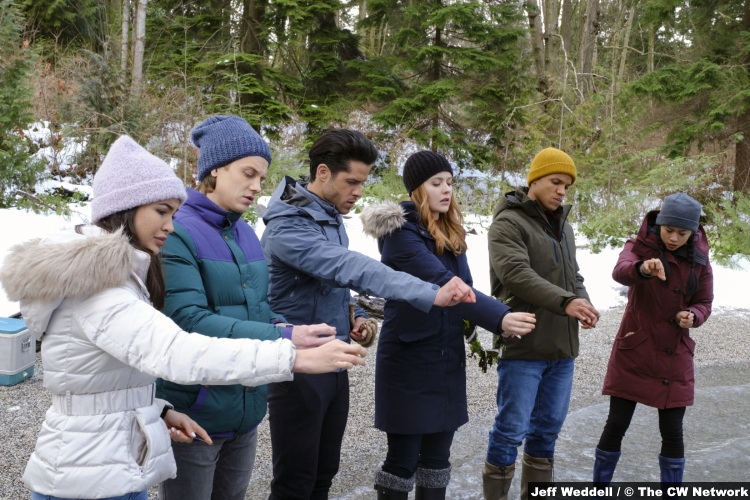 So that’s what they ask Aglaeca for. The Drew crew, which now includes Owen, gathers in the Bay to perform the ritual. And for once, it works. Well, a set of bones floats up to them. I sure hope it’s Lucy’s. And of course, it’s not without its dangers. Owen springs a leak, for instance, getting a nasty gash in his arm. Nancy’s eyes bleed. And then later at home, she coughs up what appears to be a seaweed wreath.

But hey, at least she got to make out with Owen. That should keep her spirits up, while a spirit makes her spit up increasingly improbable items.

9/10 – Once again, a neat twist keeps the mystery engrossing.