Episode Five is in the books. You can catch our previous reviews here…

Last week was the lowest-rated episode thus far but, despite how empty it left me feeling, I nevertheless walked away with a spark of hope that the show would still find its footing. One hour later and, while I won’t say the spark has turned into a flame, it also hasn’t gone out either.

In the case of this week, it was two-fold. On the one hand, there was everything the show didn’t have, namely the Romulan subplot on the Borg Cube. The happenings there are mentioned a grand total of one time and that’s it. We don’t even get a quick cutaway scene to remind us what’s happening. Despite the fact that Picard’s entire plot is about getting the old man to that cube and to that girl, I still can’t muster up a whiff of interest in anything that’s happening there.

The only bonus this week was the fact that it graced us with a few answers to the many questions the show has raised thus far. In a show that has been serialized to the point of feeling like one story arbitrarily hacked into eight pieces, where episodes don’t end so much as “stop,” it was a welcome change of pace to have a mostly self-contained story(!), that gave its two best actors this week the time and space to do some nice acting(!!), and actually revealed some of the plot that’s been stringing us along for half the show thus far(!!!). Those are A+ things. Good job, everyone!

The only thing you forgot to do was not suck. 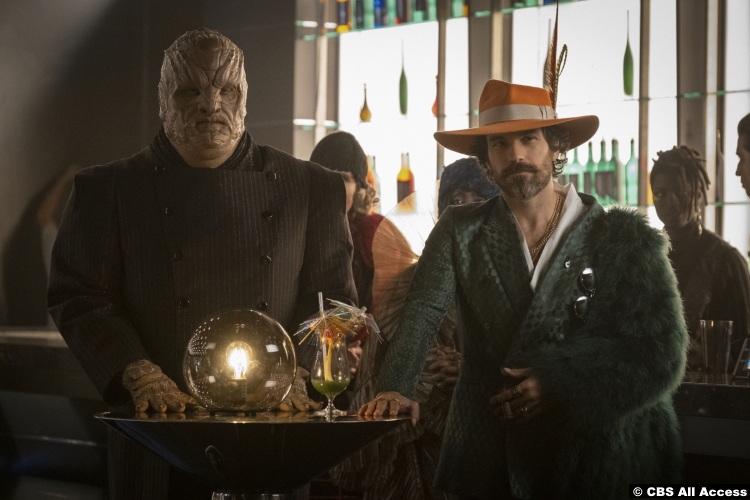 First, the self-contained story featured the squad going down to planet “Freecloud” which at first seemed like it was some kind of virtual reality world (and what a dated and horrible idea that would be for a show set in the 25th century), but then when they get there it’s just…the Ready Player One discotheque? The silly pimp outfit, pirate eye patch, funny accents (although Jean Luc finally sounding like a Frenchman, albeit an intentionally horribly cliched one was *mwah*); it was all too much and (other than the accent) not in the “so bad it’s endearing like the Ferengi episodes on DS9” sort of way, but more like the “I don’t want someone to catch me watching this like Spock’s Brain” sort of way. 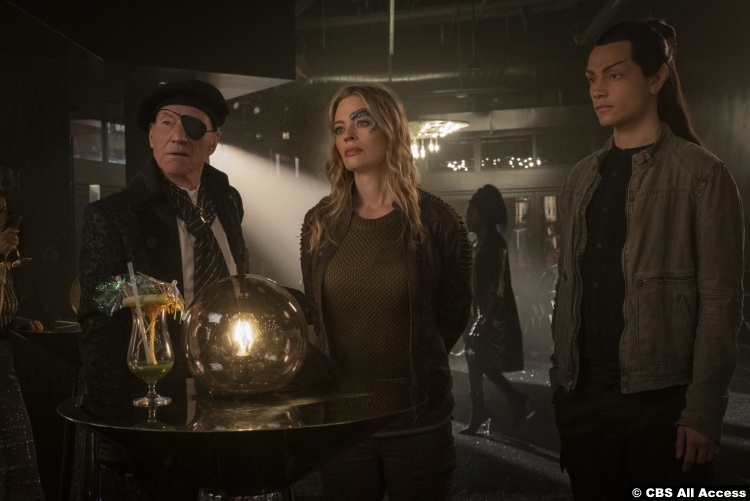 Second, the best scenes of the episode were the ones that featured Picard and Seven, sitting next to each other, playing verbal chess. The single best scene this week came at the end, where the two ex-Borg share a moment of solidarity, both acknowledging that, after all these years, they both know a little part of them is still gone. Picard leaves Seven with a hopeful word, in true Picard fashion, telling her that they keep getting that little part of their humanity back, a piece at a time, every day.

Seven then beams back to the planet and murders the villain of the week.

Picard’s still searching for his little missing piece of humanity; Seven seems to be chipping away at what’s left of hers. That’s great, great, great, stuff and I wish the whole show was that good. After episode one, I was left with the impression that this would be a return to Star Trek being a show that loved pondering ideas, debating morality, and resolving conflicts. Halfway through the first season and that feeling has yet to reappear except in little, fleeting, glimpses as we had with Seven/Picard. 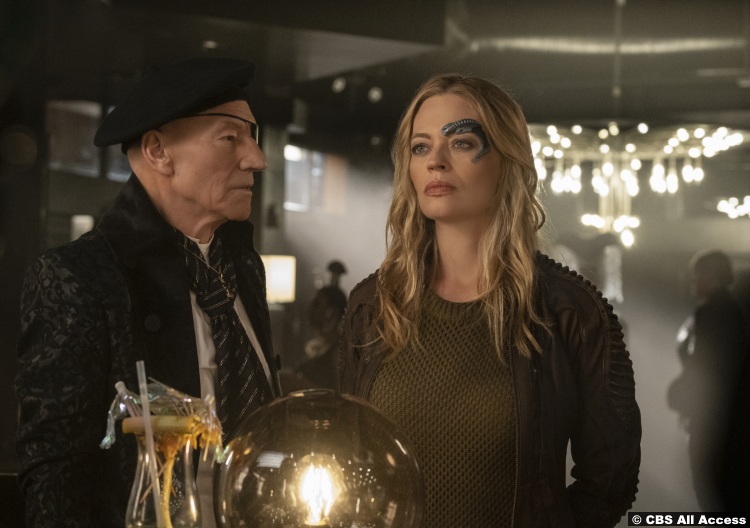 Finally, there are the plot reveals. While I am glad to have them, I can’t help but be disappointed now that they’re here. Bruce Maddox was name-dropped from the jump and when he finally gets an episode (recast, unfortunately), it left me supremely disappointed. His opening scene, early in the episode, ended with me thinking he was poisoned and killed, which angered me because I was ready to invest in the character again. Then he’s rescued…only to be killed for real this time. Why build up this character, bring him back, just to kill him without getting any use out of him, personally?

They set up the relationship between Bruce and Agnes at the beginning of the episode, creating emotional stakes in the rescue plot. That’s good. Then they end that relationship with her murdering him all within the same episode, making the initial reveal feel hollow and contrived. Why not establish they were lovers in episode one? Or episode three? Or any time that’s not the same hour in which she kills him? You’re doing a serialized show here, CBS; use the medium to its potential!

The reveal that Agnes is working with Admiral Oh at Starfleet is one that many predicted. I didn’t; I thought it was too obvious and that she was actually playing it straight. Turns out she was 100% emotionally invested in their plot right up until the exact moment when she had the opportunity to kill her lover. And he was her lover; she shed those tears while she killed him. She wasn’t faking that. She’s not a total infiltrator. Instead they “got to her,” but without buildup or context, it’s just yet another plot twist.

So, props to Picard for answering some questions this week. Demerits to Picard for replacing those answers with new ones. Ordinarily it’s good when a show does this, but when the first round of answers are disappointing,  it’s easy to lose faith that the next round will be better.

6/10 – A marginal step-up from last week; competently directed and occasionally well-acted, but there’s not much to work with here.