I said last week that the real blood was coming, but I didn’t mean it like this. In its best episode yet, Dare Me shifts perspective to show us how we got to an unfortunate incident. 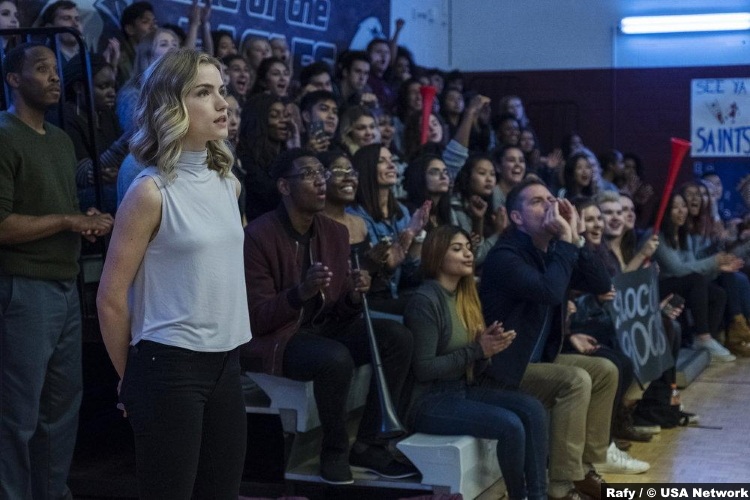 Nevermind that she can barely balance on one leg as it is–she wants to try a more complicated one-legged move while balancing in the hands of her squadmates. Colette tells her, though, in no uncertain terms that she’s not ready, that she needs to concentrate on mastering the liberty stunt.

Based on what we’ve learned about Tacy so far, though, the end result now seems inevitable. The girls are fired up, having just learned that they’ve been accepted for regional competition. All of them look so happy, don’t they? But we’ll find out, of course, that it’s all an illusion. 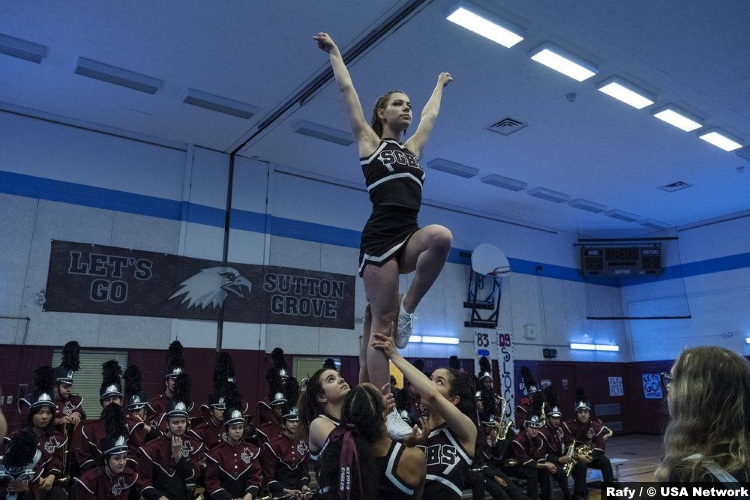 But pumped up from the good news and ready to show off for their classmates, they go into their routine. Only Colette, as we see later, sees the disaster about to happen. Tacy starts lifting her leg, as Colette warns her to stop. Her warning isn’t heeded, though, and Tacy loses her balance, kicking Riri in the mouth and knocking out several of the poor girl’s teeth. A disaster has happened.

As Colette rushes into action and Bert comforts Tacy, none of them see that Beth is also suffering. She’d been on the verge of a damn panic attack for most of the assembly and now it’s let loose, as she struggles to breathe. And no one notices.

As for what led to her distress, it’s clear that something bad happened at the Playland party. You don’t need to be a regular Sherlock Holmes to put the clues together, but we’ll do it anyway. There’s the bloody mouth and her disheveled appearance, the broken necklace. [There might also be those bruises, but she is a cheerleader, so we don’t know for sure.] There’s the string of messages from Kurtz (Chris Zylka) and the conversation, in which he never quite apologizes, instead, telling her that he “didn’t mean to.” And most damningly, the show putting up the contact info for RAINN, the National Sexual Assault Hotline, after the show. So, again, something bad happened.

But where, I wondered as he accosted her in the school hallway, is an adult? Does no one see this? Because, like Colette, I’m not blaming Beth for this. I blame the adult. And I wonder why no other adults are watching. 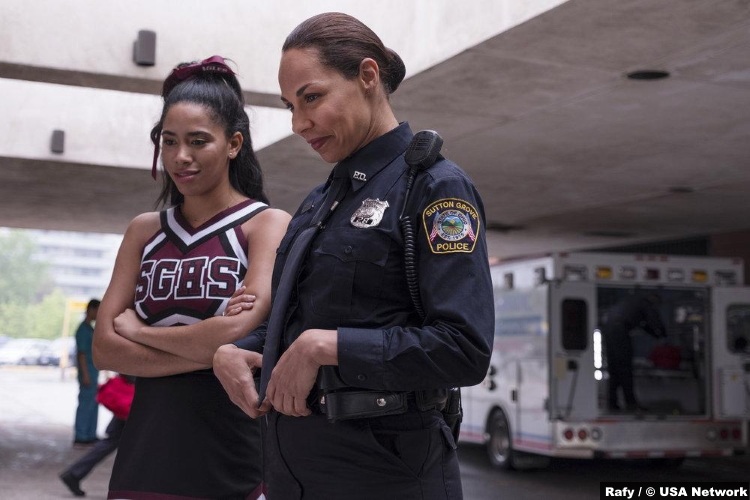 It’s funny, then, that Colette is on the opposite end of that conversation. Later at the hospital, Riri’s mother says essentially the same thing. Colette is the adult and she was responsible for those girls.

Riri’s mom is obviously emotional, and I don’t want to just throw blame around, because you can try to do the right things and still not get anywhere. Addy’s mom, Faith (Amanda Brugel), for instance, tries. She tries to reach out to Beth, but Beth is just not capable at this point of taking that lifeline. She’s too guarded, too closed-off. After all, look what happens when she lets her guard down. She ends up with teeth marks on her tongue.

Beth is on a bad road right now. She’s hurt, has little supervision, and has access to a gun. Historically, that’s led to tragic consequences too many times in this country. Hopefully, someone will see it or Beth will ask for help. But hurt people hurt people, and despite Riri’s injury, Beth is the most injured right now. Riri’s teeth can be replaced. What was stolen from Beth is harder to get back.

9/10 – In a POV-shifting episode, the show finally lets us get to the heart of its main characters, and it turns out to be a lonely and unforgiving place.

And teenagers, please ask for help if you need it. Don’t let the world drag you down and please don’t do something you can’t undo.