50 years ago the Beatles said “The End”

For a variety of retroactive reasons, Abbey Road is the perfect final album for The Beatles…

Originally titled Everest (not after the mountain—at least not directly—but after the popular brand of cigarette), the name was changed along the way to Abbey Road. This was not in honor of the studio where the band buttered its bread but instead was a mere reflection of the cover design, which featured the foursome crossing the street outside the recording hall. In hindsight, however, it’s the perfect name for a final album as it adds a poetic “closing of the loop” to the whole affair. The Beatles effectively began with a marathon, one-night session, recording the entirety of their fourteen track debut album in the Abbey Road studio. Every record that followed came together there (apart from Let it Be, which will forever be the band’s odd duck LP release); the title now works as a fitting “so long” title for the band’s last album; it’s a farewell to the place where the magic was made for all those years.

Beatles’ LP covers are in a class all their own. Even early on the band was innovating, with their second LP featuring the stark black and shadowed picture that remains one of their most iconic looks. For the album Beatles for Sale, the band insisted on posing as somberly (you might even say “bored”) as they could get away with, in contrast to the Beatlemania that was sweeping the globe. Help’s LP featured semaphore. Rubber Soul had a skewered, twisted, and distorted image. Revolver was a hand-crafted collage from their friend and artist Klaus Voorman. Sgt. Pepper’s cover needs no introduction, nor does its polar opposite follow-up. Let it Be would eventually have a generic four-head-shot cover, but for the band’s true final album, the cover is, fittingly, perfect… 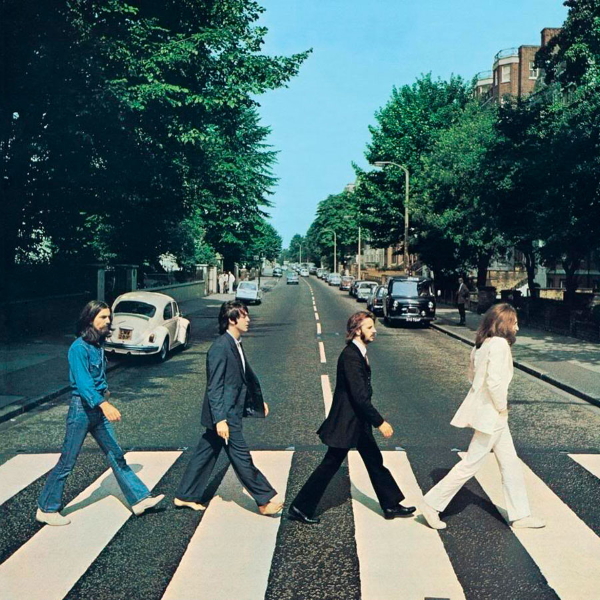 It’s The Beatles’ first and only UK album cover that lacked both a title and the name of the band. The image of the foursome strolling across the striped street is so iconic today, it’s become a meme unto itself with tourists recreating the walk despite the street in question only growing in traffic in the fifty years since.

There are a plethora of alternate shots showing the band trying out different arrangements, poses, etc, absolutely none of which feel as perfect as the one that was selected. Various interpretations have been offered about any symbolic meaning. Perhaps the most commonly cited is…

George is the grave digger, wearing blue collar clothes. Paul is dead (of course), shoeless and dressed in a nice suit, as well as out of step with the others. Ringo is the priest, dressed in black with a suit and tie. John is Jesus, adorned in white with his long hair and beard. It’s a funeral for the band!

Considering that (A) the band just hastily met for the photo-shoot and no one has said the outfits were planned in advance, as well as (B) the aforementioned plethora of alternate takes that featured different orders of appearance, there’s probably no deeper meaning at all. It is, as John would say, merely a “glass onion;” it’s a simple thing none of them thought anything about, but which the fans scrutinize to insane degrees all the same. Still, the shot is iconic, artistic, and just vague enough to stir up wild debate. That’s a perfect Beatles’ cover, and seeing them all seemingly walking off the stage, away from Abbey Road forever (as a group), makes it the perfect final album cover, too.

After struggling during the Let it Be sessions, with some lazy numbers and little contribution from Ringo, everyone put their best foot forward here (with one exception). Come Together kicks it off in style and though the lyrics are (intentionally) nonsensical, there’s no denying the musicianship on display, especially with Paul’s basswork. If you ever forget just how innovative the Beatles were as musicians, just listen to the isolated bass track of Come Together and remember that no one (no one) played the bass like this before Paul…and after Paul everyone did.

George’s first of two stellar contributions is Something, deemed by John and George as his greatest composition in the group. The love song has been recorded by scores of people and it was so good upon completion that the band made it the album’s debut A-side single, a first for George.

Paul drops two, back to back, and they could not be more different. Maxwell’s Silver Hammer is the lone smudge on an otherwise perfect album. It’s an exercise in vanity with Paul at the height of his pretentious phase, and while musically it’s incredibly varied and wonderfully arranged, the lyrics are idiotic and the song is a chore to get through. Paul’s other side-one offering was Oh! Darling, a delightful love song that shows off the singer’s range better than any other on the album. It works almost as a foreshadowing to what kind of musical style he would eventually settle into as the front-man for Wings.

Ringo’s second-ever composition is Octopus’ Garden. Written in part in 1968 (finished in ’69 with an assist from George), it’s a song about…well this one isn’t meant to be scrutinized and analyzed. It is what it is, which is a lovely ditty about how nice it must be to live under the sea. It’s not Maxwell Silver’s Hammer though, since it’s fun and simple and doesn’t feel like it was designed to drive the listener mad.

Side-A ends with John’s experimental medley, I Want You/She’s So Heavy. Musically, as with the rest of the album, the song is remarkable. Lyrically, it’s evident just how much John’s addiction to heroin and his relationship with Yoko had sapped his creative juices.  There are only nine different words to the song, repeated over and over:

The man who wrote musical poetry with songs like In My Life and Strawberry Fields Forever was now seemingly unable to string together three sentences. The real joy to the song, however, is not the lyrics but the music, specifically the way the song’s second half becomes increasingly consumed by static until it abruptly ends. Listening to the album on a record player in 1969, the song would have stopped suddenly and the needle would have continued gently scratching against the inner ring of the album. The effect was to simulate the hypnotic effect of love (and drugs in combination). The effect works, even if there had to be a sacrifice in songwriting.

The opening six tracks of the album are as strong a set of songs as you could find anywhere in 1969, even with Maxwell’s Silver Hammer dragging things down a hair. For a final album, you couldn’t do it any better if you tried (and the Beatles weren’t specifically trying to make this their last album).

As great as the first half of the record is, however, Side-B is where the real magic lies…

Technically, the songs Here Comes the Sun and Because should not be considered part of the “Abbey Road Medley” but, by opening the side, they tend to be thought of as extensions of the whole arrangement that follows. The former song is George’s other contribution, a beautifully played, poetically written expression of hopefulness as he sees the end of the band in sight. The latter came about when John asked Yoko to play Beethoven’s Moonlight Sonata backwards. The flatpicking is the star of the former, and electric harpsichord the star of the latter, which gives the song an almost alien-like feel, perfectly segueing into the real star of the album, the medley.

Once again, what we look back on as an appropriate capper to the decade-spanning period of Beatlemania was, at the time, merely a way to get some mileage out of a bunch of song fragments that John and Paul either weren’t able or simply weren’t interested in developing into whole songs. Paul and George Martin meticulously arranged the tracks, with John mostly checked out, and George & Ringo having little to contribute beyond playing guitar and drums.

The medley works so perfectly as the band’s big finale as a group, essentially touching on the past decade in one area or another. Lyrics in You Never Give Me Your Money hint at their frustrations as businessmen running Apple Co., while Sun King, Polythene Pam, and Mean Mr. Mustard give a nod to the group’s more esoteric and obscurely-referenced lyric-writing during their psychedelic period. She Came in Through the Bathroom Window tips a lyrical hat to the obsessive fans the band suffered over the years. Of course, Golden Slumbers and Carry that Weight are just about as perfect a “goodbye” as you could have for a band as big as this. Paul is at his best as he first lullabies the band to sleep before telling the rest of them that he was out, that he blamed John for it, and that he (John) would have to live with “breaking up the Beatles,” carrying that weight with him forever.

Not that John cared.

The medley ends with each of the members getting a solo; a musical “farewell,” if ever there was one. Even Ringo, ever reluctant to do the “cliche’d drummer solo” drops a great one before everything quietens down and we hear the meditative, introspective, and peaceful words of The End: “in the end, the love you take is equal to the love you make.”

For a collection of songs that were only ever supposed to be an experience, the eight songs here (plus Your Majesty makes nine) work as a symphony of rock and roll, highlighting the bands individual skills that they would spend the next decade displaying on their own, as well as their talents as a unit, showing everyone listening that, when they were together, no one could top them or stop them…

It’s rare for a “last album” to be so strong, especially in a circumstance where the band did not end because a critical member suddenly died or quit. Typically a band just goes until they fizzle out, losing interest from listeners until there’s no one left who cares. The Beatles ended while still on the mountaintop. They stood atop Everest and then spread out in four cardinal directions. They had grown beyond what they could do as a fourth of a unit; by 1969 they were each a single talent, ready to shine in the world outside of Abbey Road.

Thus, the album became their goodbye, and a fitting one at that.