The Lion King is going to make two billion dollars. It’s going to dominate the cinema for the next two months. Disney is going to walk away with even more money in its war chest and another movie ready to go on its streaming behemoth that’s launching this fall. Everyone involved in the movie is going to get a nice pat on the back from Bob Iger and co. Good for them. I commend them.

It is a beautiful disaster of a movie.

I can’t help but wonder, however, what it would be like to watch this movie having never seen the original, or to see it if you haven’t seen the original since you were a kid maybe ten or twenty years ago. For me, we have three children in our house and there’s not been a year where The Lion King hasn’t played on our TV ten times since 2006.

I’m sure having it memorized has affected the way I received the remake. But to be fair, Disney isn’t exactly marketing this to those who are new to the film. Everything from the poster to the trailer to some of the casting choices; they’ve all added up—the way all of Disney’s remakes have done—to a movie designed to appeal to the child-turned-adult who remembers those movies.

On paper, this movie should have been a slam dunk.

Jon Favreau has proven himself with Elf and Iron Man, but it was his job directing The Jungle Book that made this such a perfect match. The Jungle Book remake perfectly balanced the feel of the original with enough freshness to make it a new movie. I expected the same with The Lion King. Instead is a movie that tries simply to recreate the original film with a few new voices, and an updated look.

The result is a total misfire. 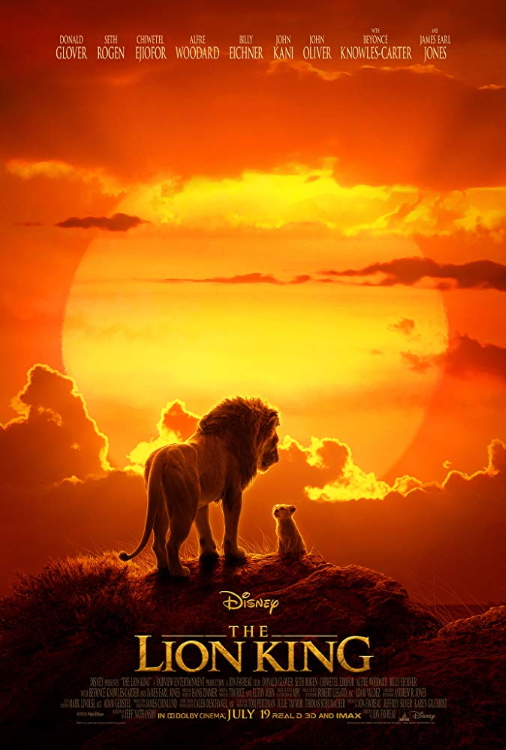 To be positive, the film has absolutely stunning design. Every animal looks exactly like an animal. Every tree looks like a tree. Every rock is a rock. Every cloud, every blade of grass, every sunrise, every shadow; if you didn’t know you’d swear it was real. Visually, the uncanny valley effect is completely removed. There is never a moment when you will see a lion or a bird, etc, and think “it looks almost real, but that little bit of almost ruins it for me.” None of that; this is as close to real as real can get.

A+ work by all involved. 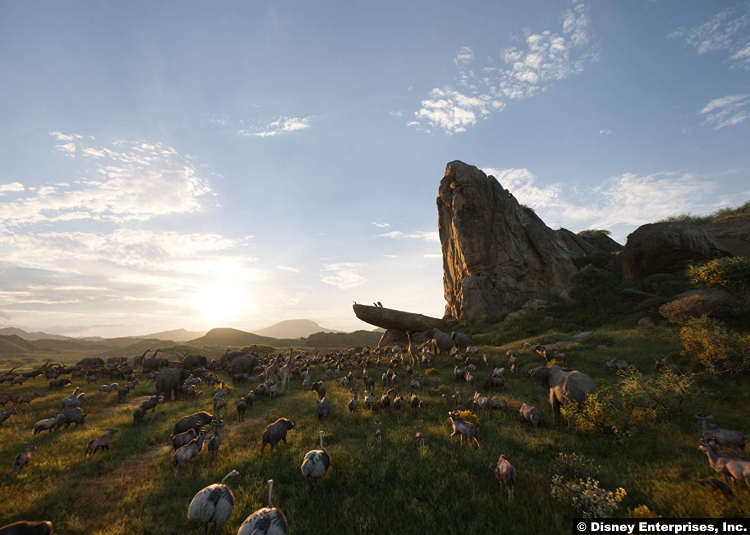 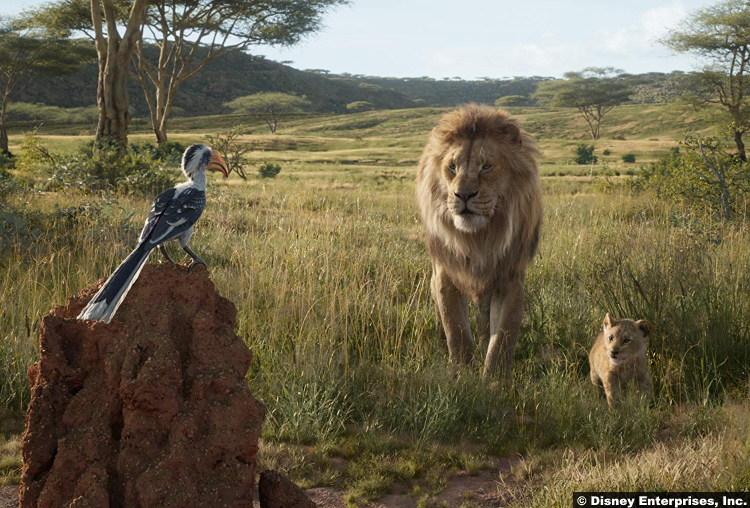 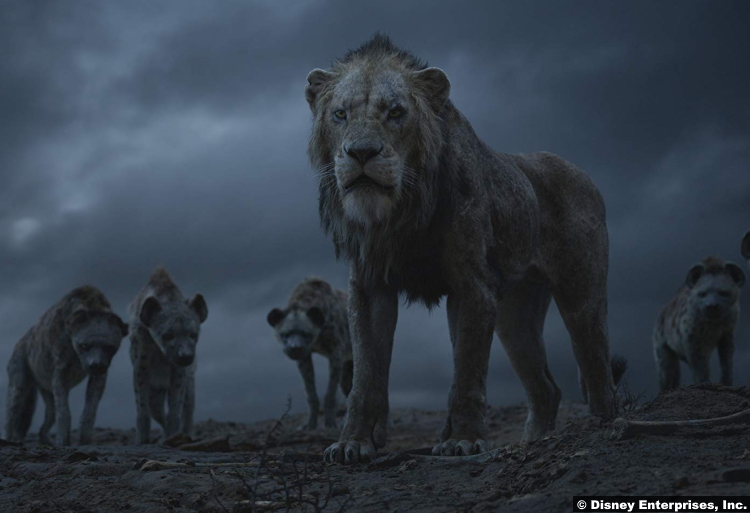 90% of the script and score was lifted from the original, and on paper, that’s a good thing. After all, the script and story for The Lion King is one of Disney’s best. Hamlet meets Bambi, with the perfect balance of humor and pathos, and a soundtrack that moved you and brought chills as it reached its crescendos. On paper, this is The Lion King, and if you loved the original you should love the remake. It basically is a pure remake of the original.

So what’s the problem?

It’s the same problem that ruined the weird Psycho remake from 1998. That was an almost shot-for-shot reshooting of Hitchcock’s masterpiece. And yet, despite adhering so truly to a movie everyone loves, the remake was hated by that same everyone. Why? It’s because there was just enough different to feel like a song one beat out of rhythm. It never settled into a groove. It never felt right.

The Lion King (2019) is soulless. It is stilted. The actors—reading the same lines from the original—are horribly directed (the biggest surprise for me, considering the director). Everything was read and sung with all the enthusiasm of a captain’s announcement on an airplane. Songs like “I just can’t wait to be king,” which were presented in the original as lively and hopping numbers are, here, subdued and slow. The moody and chilling and then rousing “Be Prepared” in the original is, here, awkward and detached, barely sung. When Scar bursts into the song in the original it feels organic and obvious. Here, it feels wrong.

I think the fact that these very-photo realistic animals don’t emote or move as “cartoonishly” as the original versions will be a sticking point for some, but it didn’t bother me. It made sense considering the look of the film that they wouldn’t be quite so silly. And maybe that’s why Favreau chose to make the songs less lively. 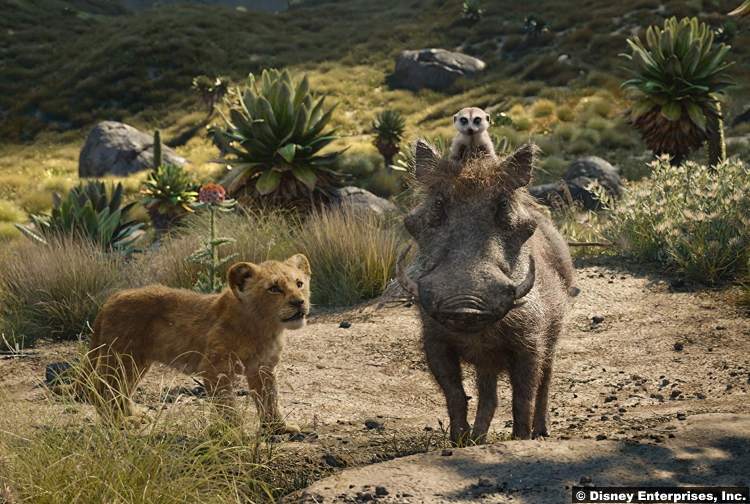 It doesn’t change how dry and uninspired the line delivery was in the movie. That was the film’s worst offender. Hearing the right words said and sung in the wrong way was like uncanny valley for my ears. And I don’t just mean “the actors didn’t use the same inflections that the animated actors did.” Of course they’re going to read their lines differently; they’re (mostly) different people. But they still needed to read their lines in a way that sounded true to the context of this movie. No one talked like they were talking to someone. Everything felt disconnected.

Remember in the original when Mufasa talks to Simba after he gets in trouble in the graveyard? Remember how natural the back-and-forth between them was? Go back and watch that scene…

It’s like two actual people talking. It’s like James Earl Jones and Johnathan Taylor Thomas were in the room next to each other, had memorized their lines, and were really acting through the scene. That level of voice acting is constant through the film, and it’s what sets the movie apart from so many animated movies. If you’ve ever watched an animated movie that just felt off, it’s probably because the actors are phoning it in (maybe even literally) and aren’t being directed through the scene the way they would be on a real set. There’s a cheapness and “enthusiasmlessness” that can be felt.

The same scene in the new movie sounds like two people, who had never read the script, were given words on a page, without any context, and told to just speak into the mic. There’s no life to any of it, which is sad considering how real the animals on the screen look.

What’s the lesson to learn? Maybe don’t stick so close to the original in the screenplay. Go for a faithful adaptation that includes the songs verbatim (or almost) but not the screenplay. If you had told me a year ago that Aladdin would be the Disney remake I would love the most this year, I never would have believed it. But that movie nailed exactly the way Disney should handle their remakes.

I look forward to the eventual YouTube edit where some clever computer wizard removes all the audio from this movie and replaces it with the audio from the original. That will be a great movie.

6/10 – Stunning to behold but wholly frustrating to listen to. The Lion King is an A+ visual feast but an F- to the ears.

It’s going to make two-billion dollars though, so no one will care.