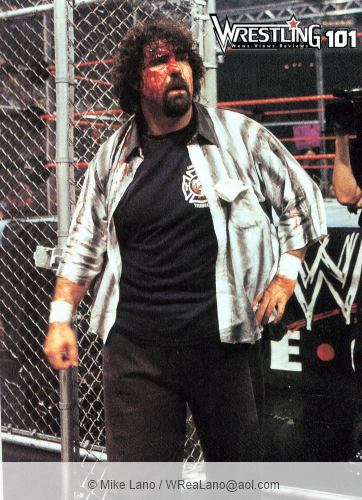 Before he challenges Roman Reigns for the Universal Championship inside Hell in a Cell this Sunday, RAW kicks off with “The Monster Among Men” Braun Strowman, who is flanked by new RAW Tag Team Champions Dolph Ziggler & Drew McIntyre. The trio would also be accompanied by the group of Superstars that helped them lay waste to The Shield last week as Kevin Owens, Jinder Mahal & Sunil Singh, Elias, Drew Gulak, Mike Bennett, Mojo Rawley, The Ascension, and The Authors of Pain surround the ring. Dolph Ziggler starts by saying “we told you so” before Braun Strowman says that they beat The Shield down last week just like they said they would. Braun then says that Roman Reigns is a “coward” who can’t fight his own battles on his own. Strowman then says that Reigns has his “hounds of justice” but now he has his “dogs of war”, saying that The Shield has been running rampant “far too long” but they found out last week that their strength in numbers fails to compare to anything that is “my pack”.

Dolph then says that the men around the ring “stood up” for what was right and they “stood up” for themselves. McIntyre then says that the “balance of power has shifted” and, tonight, they will continue the “carnage” and they will set an example for everyone around ringside when they “dismantle” The B-Team tonight. Braun then adds that’s “nothing” compared to what will happens when Roman Reigns “gets these hands” inside Hell in a Cell this Sunday. Naturally, this brings out The Shield as Universal Champion Roman Reigns, Dean Ambrose, & Intercontinental Champion Seth Rollins fearlessly march through the crowd before brawling with the Superstars on the outside. However, The Shield would have a plan as the trio would wield axe handles, using the wooden weapons to take out their opposition as Braun, Dolph, & Drew are quick to create distance by retreating to the stage as the two sides stare each other down.

After The Bella Twins returned to action last week with a victory over The Riott Squad, the leader of The Riott Squad, Ruby Riott, would be looking for payback as Ruby, with Liv Morgan & Sarah Logan in her corner, would go one-on-one with Nikki Bella, with Brie Bella in her corner. With Brie Bella taking care of Liv Morgan & Sarah Logan, it would allow her sister to connect with the Rack Attack 2.0 to Ruby Riott, pinning Ruby for the win.

In a rematch from last week, The B-Team would get the opportunity to reclaim the RAW Tag Team Titles as The B-Team would challenge new RAW Tag Team Champions Dolph Ziggler & Drew McIntyre for the titles on RAW. In the end, it was Dolph Ziggler using a rake to the eyes of Bo Dallas that would allow the champions to hit the combination Zig Zag/Claymore Kick on Bo Dallas with Drew McIntyre pinning Bo for the win to successfully retain their RAW Tag Team Titles. After the match, The Shield’s Dean Ambrose & Seth Rollins would ambush Dolph Ziggler & Drew McIntyre as, despite being told to leave the arena, Ambrose & Rollins would take it to the RAW Tag Team Champions, isolating Dolph before Drew is able to pull Ziggler out of the ring.

Backstage, Dean Ambrose & Seth Rollins would play games with Acting RAW General Manager Baron Corbin, saying that Corbin told The Shield to stay out of the arena and they’re just Dean Ambrose & Seth Rollins. Corbin argues that it’s just “semantics” before Seth says that it’s funny that Braun Strowman, Dolph Ziggler, & Drew McIntyre didn’t get arrested last week, accusing the Acting GM of “falsifying documents”. Rollins & Ambrose then brings in the local sheriff to arrest Baron Corbin before Corbin asks to talk to Seth Rollins in private. Ambrose and the sheriff then exit the office, joined shortly by a grinning Seth Rollins who says that they aren’t going to need to press charges after all. Ambrose then tells the sheriff that he will talk to him next time he gets arrested before the two Shield members walk off.

Kevin Owens was then set for a one-on-one match against Tyler Breeze but Owens would attack Breeze before the match can begin. While Breeze would try to fight back, Owens would ultimately prevail, delivering a powerbomb on the ring apron to Tyler Breeze. Owens then grabs a microphone, explaining that he walked away from RAW to weeks ago, but Baron Corbin convinced him to stay on RAW. Owens then says that he agreed to stay on the condition that he cannot be held responsible for his actions, saying that whatever he does in the arena is just doing his “job”. Owens continues, saying that he is “sick” of The Shield just like everyone else, saying that he can do whatever he wants, whenever he wants.

The new team of Chad Gable & Bobby Roode would be in action on RAW as Gable & Roode would face The Ascension. In the end, it was Chad Gable using his rolling German suplex with a bridge to keep Viktor down for the three-count to pick up the win for his team.

Elias’ performance on RAW would then be interrupted by the return of a WWE Hall of Famer as former RAW General Manager Mick Foley makes a special appearance. Foley tells Elias that he doesn’t have a “sincere bone” in his body before Elias says that he was a child in the crowd when he saw the Hell in a Cell Match between Foley and The Undertaker in 1998. Elias says that the match was the “stuff of legend” but that was then and now he is standing in the ring with a “broken man” who is singing the same, sad song that he’s been singing for the last twenty years. Foley then says that, despite their differences, he had a talk with Stephanie McMahon about being involved with WWE Hell in a Cell this Sunday.

The WWE Hall of Famer continues, saying that he never felt more alive than he was “almost dead” in that Hell in a Cell Match before Foley drops the bombshell that, this Sunday, he will be locked inside Hell in a Cell with Roman Reigns and Braun Strowman as he will serve as the Special Referee for the Universal Title match! Foley then starts to leave the ring but that is when Elias tells Foley to shut his mouth and go back to where he came from. The Hall of Famer responds by getting into Elias’ face, revealing that, for old times’ sake, Stephanie has allowed him to make one match on RAW and he is making that match right now, putting Elias in a one-on-one match with Finn Balor.

In an impromptu match made by Mick Foley moments earlier, Elias would go one-on-one with Finn Balor on RAW. In the end, it was Finn Balor countering an attempt at Drift Away into a roll-up, scoring the three-count and the win.

Braun then brings Roman over to the announce table but, just when it looks like Strowman is going to put the Universal Champion through the announce table, Reigns would manage to counter, hoisting “The Monster Among Men” up before dropping off of the table, sending both men crashing through the stage floor! Roman then climbs out of the hole, holding his Universal Title belt high as Reigns appears ready to take Braun to hell this Sunday at WWE Hell in a Cell with the Universal Title on the line.