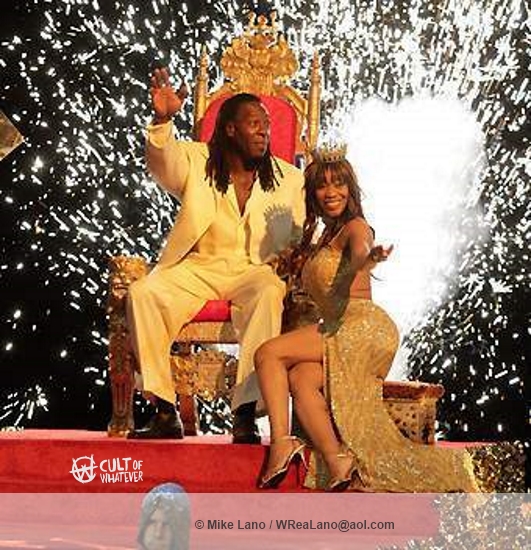 SmackDown LIVE would kick off with a celebration as, one week after securing their fifth tag team titles as a team by defeating The Bludgeon Brothers in a No Disqualification Match, new SmackDown Tag Team Champions The New Day would kick off the show. Kofi Kingston says that The Bludgeon Brothers are “ferocious” but they had them “out like a light” before Big E starts to say that he has been waiting a long time to say that they are “five-time” champions. However, Big E is interrupted by a surprise appearance from WWE Hall of Famer King Booker. Complete with robe, crown, and scepter, Booker says that he has come to Toronto as the five-time former WCW Champion welcomes the new tag team champions to the “five-time championship club”. King Booker then busts out his signature Spin-a-roonie before Xavier Woods and Kofi Kingston take turns doing the signature move and, while Big E tries his best, his New Day cohorts help the big man spin.

SmackDown Tag Team Champions The New Day would then take their seats at their special announce table at ringside as the opening match of the night would be the first of two Triple Threat Tag Matches in the series to determine The New Day’s challengers for the SmackDown Tag Team Titles at WWE Hell in a Cell as Gallows & Anderson, Cesaro & Sheamus, and The Colons would compete to come one step closer to a tag team title opportunity. At the end of a wild Triple Threat Tag Match, The Colons would hit Luke Gallows with a double Back Stabber but Cesaro & Sheamus would take advantage as Cesaro would take Epico out with an uppercut while Sheamus takes Primo out with the Brogue Kick on the outside. Cesaro then pins Gallows to pick up the win for Cesaro & Sheamus as “The Bar” will face the winners of next week’s Triple Threat Tag Match between The Usos, SAnitY, and the newly reunited team of Rusev & Aiden English.

After putting Randy Orton through a table with a Swanton Bomb last week, Jeff Hardy would make an appearance on SmackDown LIVE. Jeff says that Randy Orton has been obsessed with him since coming to SmackDown LIVE, saying that Orton altered the “chemicals” in his brain and made him believe he can fly. Jeff then says he felt “alive” when he put Orton through a table and he felt “re-broken by fate” before Jeff calls Orton out to finish what “The Viper” started. Orton then comes out to the stage, telling Jeff that he has finally seen who he truly is before Orton says that this “version” of Jeff Hardy is the career that he is going to end”. Orton then says that he is going to leave Jeff in a “heap of bones” in the middle of the ring. This prompts Jeff Hardy to lay down a bold challenge, challenging “The Viper” to face him inside Hell in a Cell! However, Orton offers no response to the challenge as Orton drops the microphone and backs away.

Following her loss to Peyton Royce last week, Naomi would be looking for redemption as Naomi would go one-on-one with the other half of The IIconics, Billie Kay, with Peyton Royce in her corner. In the end, it was a kick from Peyton Royce on the outside behind the back of the referee that would allow Billie Kay to roll Naomi up, scoring the three-count to pick up the win.

As they prepare to face The Miz & Maryse in a Mixed Tag Match at WWE Hell in a Cell, Daniel Bryan & Brie Bella would make an appearance on SmackDown LIVE. Daniel says that The Miz is a “bad actor”, saying that The Miz proved that he was a “coward” last week. Brie says that Maryse is helping The Miz cheat and The Miz & Maryse are always running their mouths. Daniel says that Brie is a “face-punching hot mama” before the husband and wife duo are interrupted by Andrade “Cien” Almas & Zelina Vega. Zelina says that, since coming to SmackDown LIVE, Almas has put Sin Cara on the shelf, taken AJ Styles to the limit, and defeated Rusev before saying that it’s about time that Andrade “out-wrestles” Daniel. Almas adds that he is the “only star” in the ring before Daniel responds by saying that he would love to make this match official. This brings out SmackDown LIVE General Manager Paige, who polls the crowd before making the impromptu match official.

In an impromptu match made by Paige moments earlier, Daniel Bryan, with Brie Bella in his corner, would go one-on-one with Andrade “Cien” Almas, with Zelina Vega in his corner. During the match, The Miz would come out to ringside and Daniel Bryan would take his focus off of Andrade “Cien” Almas in order to dive out of the ring to take out The Miz. Despite Almas’ best efforts to take advantage, Daniel would ultimately lock in the Yes Lock on Andrade. Zelina Vega then tries to get involved by getting on the ring apron but Brie Bella takes Zelina out before Maryse emerges from the crowd, shoving Brie Bella into the ring post on the outside. Meanwhile, in the ring, The Miz attacks Daniel Bryan to end the match by disqualification. The Miz then tosses Daniel to Andrade “Cien” Almas, who plants Daniel with the Hammerlock DDT before Miz mocks Daniel by using Daniel’s own Yes Lock against him. Meanwhile, Maryse holds Brie in the corner so that Zelina Vega could take Brie out with the double knees to the face. Andrade & Zelina then leave the ring as Maryse picks Brie up, planting Brie with the French Kiss DDT before The Miz follows it up with the Skull Crushing Finale to Daniel Bryan. This leaves “The It Couple” standing tall over their WWE Hell in a Cell opponents.

After being ambushed by Samoa Joe last week before again addressing AJ Styles’ family, WWE Champion AJ Styles would make an appearance on SmackDown LIVE to address his WWE Hell in a Cell opponent. AJ says that Samoa Joe is good with “mind games” but all that he has proven is that he’s not “good enough” to take the WWE Title from him. Styles says that he is going to put a stop to Joe’s mind games right here, right now before the WWE Champion says that they don’t have to wait until WWE Hell in a Cell, calling Joe out to fight him. However, Samoa Joe would appear on the Tron instead, saying that he’s not done “playing daddy” yet before Joe calls AJ’s wife Wendy, saying that he is going to keep the promise that AJ did not keep. Joe then asks if they’re still on for the “Back to School BBQ” next week before telling Wendy to save him a plate because he might “stop by” next Tuesday. AJ responds by quickly leaving the ring and running to the back but, when an emotionally charged AJ gets to the backstage area, Samoa Joe is nowhere to be found.