LAST TIME ON SO OF COURSE, it was the annual post-Mania PPV: Backlash, this time featuring both brands stuffed into one show, which actually means it featured half of both brands on a show that still felt way too long but don’t worry because WWE hears your complaints and will soon be scaling back to lol I’m just kidding, Vince literally has more money than Ted Turner now (which was his own personal milestone to achieve) so he has no compulsion to listen to or do anything you want.

Which makes this next PPV so perfectly appropriate. THIS is your SO OF COURSE preview of WWE Money 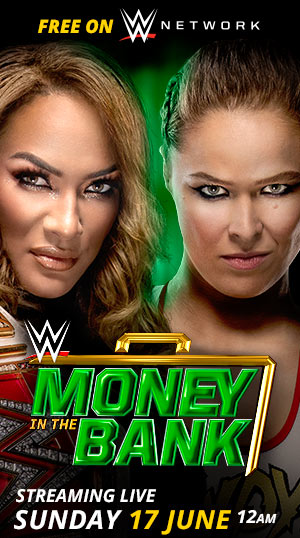 It’s a loaded card so let’s get right down to it.

I’m going to go ahead and assume Bobby Lashley defeats Sami Zayn in 10 minutes on the preshow, with Zayn working his hardest to make Bobby Lashley not look like a giant muppet and getting a “good job pal” out of it from Vince, while Lashley continues getting big TV time to justify all the money the stupid-rich stupid people are paying him.

Also, the Bludgeon Bros. will win against Gallant and Goofeth, probably in under five minutes as per custom, and everyone will wonder what Luke Harper did to deserve this and why Gallant and Goofeth can’t team up with AJ Styles again or even heel Finn Balor; that’d be fun.

Both MITB matches have a lot of intrigue with several easy-to-imagine winners competing. The ladies’ match features:

Ember Moon – for whom a win would be a soft reset after debuting post-Mania and then doing a whole lot of nothing special.

Charlotte Flair – for whom a win would be part of her ongoing storyline quest to regain the title stolen from her by a MITB cash-in.

Alexa Bliss – for whom a win would be a reclaiming of the crown after her long and successful title reign was ended.

Becky Lynch – because she’s the hardcore fan favorite underdog who hasn’t had a serious push on the main-roster in forever and MITB often features wrestlers just like that getting a surprise win.

Natalya – because she’s a vet and this would be her chance to officially turn heel and get one last run before retiring.

Lana – because the company is high on her despite her limited experience; a win would signal the rocket is going on her back for the next several months.

Naomi – because she’s in between being an underdog that’s easy to root for and a vet worthy of a big run. She’s had a run or two but neither time seemed to get the most out of what she can do.

Sasha Banks – because she’s The Rock to Charlotte’s Stone Cold.

So yeah…there are a lot of candidates who could believably win and only a few that would make fans shrug or complain. The easy money is Charlotte, but that’s so obvious it’s almost anti-climactic. Charlotte needs to chase the title for a little while longer, especially if the end game is her vs Ronda at Mania. Smackdown’s women’s scene seems pretty stable but Raw needs a shakeup, so the most logical pick for me is Ember Moon. She’d be a surprise win but a credible one and being a babyface can open the door to some interesting possibilities.

Oi. What would I do? Book it on Sunday Night Heat and pretend it never happened.

Well, no one listens to me. My idea for Backlash was for Cass to win. Here’s what I wrote last month:

My heart says Daniel Bryan, but my head says Big Cass. He’s the fragile newbie and needs a statement win lest he be treated like a joke. It’s a thin line between monster heel and paper tiger, and the difference isn’t that he loses, it’s when he loses. You don’t talk trash week after week and then lose on your first PPV fight.

Guess what they did? Go on and guess!

Far be it for me to complain when WWE simply doesn’t do what I think they should do. No no, I will complain when they do something stupid, whether it’s against something I specifically predicted or not.

Having Cass talk trash, get beat like a chump goober in a buck-thirty, and then resume talking trash like the loss didn’t happen is the most moronic thing a serious heel could do. If he was winking while he did it, like a comedy heel, that’d be one thing, but we’re supposed to think Cass is a big bad monster. So they broke him, he has no mojo, and now there’s no reason for Bryan to lose.

This match is going to be great. You know why? Because Rollins is (A) hot hot hot as a babyface AND can work a match better than anyone in the company right now, and (B) Elias is hot hot hot as a heel you love to hate and hate that you love. He doesn’t have the ring chops to hang with Rollins, but Seth is good enough to carry him, and Elias is over enough to make up the difference. This match will be electric. I just hope it happens early in the night and not right after a ladder match. I’d put it right in the middle of the card and give it 15 minutes.

Work fast, go nuts, steal the show. Look at what Samoa Joe and Roman Reigns did last month…and then do the opposite.

It’s a shame we’re not getting a Great Balls of Fire II this year. After the show was mocked so viciously last July, I suppose it was wisely discontinued. Who would have thought that one year later we’d have a feud so testicle-based it retroactively justifies last year’s stupid theme. We should be getting Great Balls of Fire II: Balls of the Rising Sun. Instead, we get a Last Man Standing match on the Money in the Bank PPV.

Mind you, the purpose of a Last Man Standing match is to beat up your opponent so thoroughly that he hits the deck and is unable to answer a ten-count. Who remembers how the last AJ vs Nak match ended?

Yeah. It ended with both men going down and being unable to answer a ten-count.

Fans rightly hated the match, so WWE, in all their…wisdom?

decided to make that hated finish the whole point of the next match, their fourth in three months.

What should happen? A finish! Me personally, I’d keep AJ running with the belt and let Nak play the heel for a non-title feud with Daniel Bryan, to keep the latter busy and delaying his feud with Miz until the perfect moment comes. There’s still a lot left for AJ to do with the title, including a WWE feud with Samoa Joe, a proper Daniel Bryan feud and a (I can dream) heel Finn feud. But if you go with Nakamura that’s fine too, just go with someone.

This has gone on long enough.

It’d be funny if we went from “five minutes; end with a roll-up” to “five seconds; end with a submission” as the completing of the circle of the women’s r/evolution.

But that’s not going to happen, of course. We’ll get a lot of “little hero runs around while big, lumbering heel lumbers bigly around the ring.” Ronda is still green and needs help. Nia is also still green…well, not really; she’s been around a while but she’s still bad, let’s put it that way. Either way, she’s not going to be any help here.

WWE did a masterful job laying out Rousey’s tag match at WrestleMania, but she had more than one ring general in there with her, walking her through a very tightly-rehearsed match. This will need a very different kind of smoke-and-mirrors and if Ronda comes out of it looking even halfway competent, you might as well put her in the main-event and run with her.

I have a feeling this will be short, with a shenanigan finish and maybe a Money in the Bank cash-in to take the edge off either Ronda’s early-career singles loss or her too-early title win. In that case, I can see Natalya winning the briefcase and cashing-in, setting up Ronda for a title feud with an opponent capable of helping her infinitely more than Nia Jax can.

I’ve already told you who should win. Read the article HERE.

That being said, if I had to pick someone to win, I’d pick Finn Balor. A briefcase win, heel turn, title win—basically Edge’s main-event career path—would do wonders for him.

Braun is the easy pick, I suppose, but he’s got enough credibility built up that he can just call out Lesnar and get a title match if he wants it. And besides, a guy as big as he is carrying a MITB briefcase just feels wrong.

The Miz is the other one, but as much as I’d love a slow-burn where Miz wins the briefcase, then later Bryan wins the WWE Title and then Miz cashes-in as one more thumb in the eye to his great rival, I don’t think WWE is patient enough for that. It’d make for a million dollar feud and would be the capper on the inevitable WWE documentary about their rivalry, but I don’t see it happening.

Likewise, I think there’s too much going on at the top of SmackDown’s card to push everything to the backburner in order to give New Day the kind of attention a MITB win (and eventual title win) would require. Good idea though that is, it doesn’t feel like the right moment right now.