In the first season of The Handmaid’s Tale, we find out that Serena Joy, who is married to one of the “Commanders” of the new America, was once a famous-ish author. She advocated for a return to so-called traditional family values and well…she got it. Now she lives in Gilead where her books were pulped and she’s been shut out of the decision-making from the beginning. 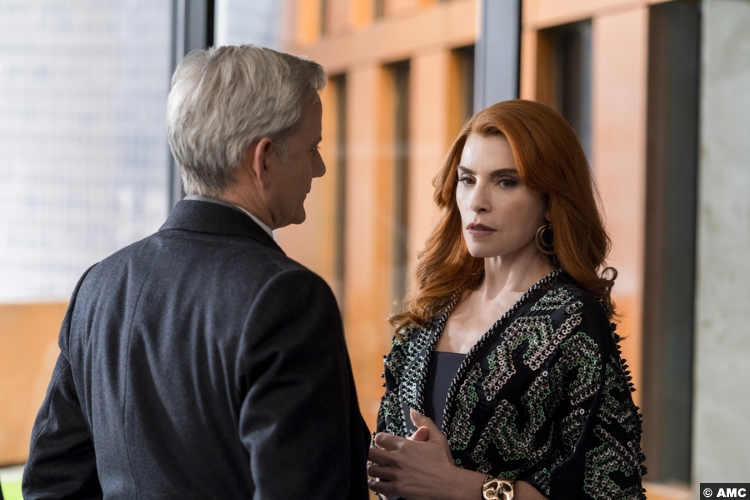 They leave her body in a cemetery on an elaborate pyre where one of the groundskeepers who discovers her drops his cigarette and inadvertently sets her and the other groundskeeper ablaze. It’s a terrible scene and not one that is likely to win Jennifer support. In fact, after an opening that tells us that grade school girls are now forming their own Jennifer chapters, it’s quite a reversal to go from that to Stanley storming into his media building to demote Kitty. As he puts it, she’s aligned his company with terrorists. Sure, but they were terrorists before.

Kitty does not take her demotion well, trashing her office and firing Plum, whom she blames for getting her fired. After all, if Plum hadn’t suggested that the letter girls were supportive of Jennifer’s message, then Kitty would still have her creative wings. Once again, Kitty’s logic is not there. 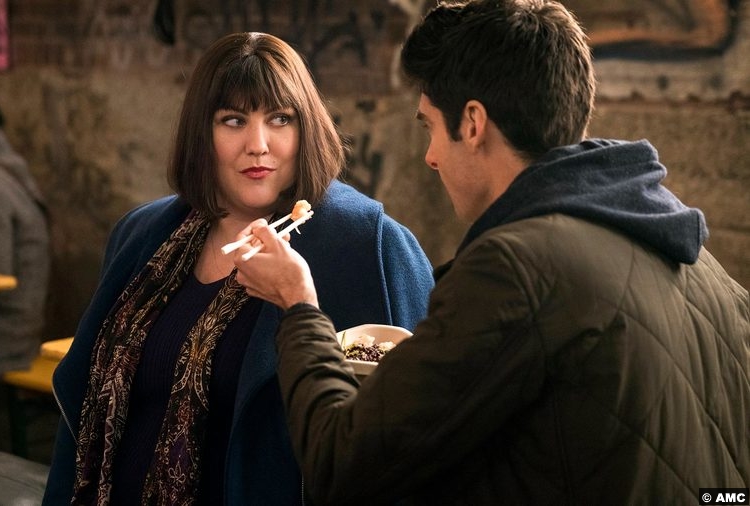 And it’s not like Plum isn’t already having a hell of a time. She’s on the next phase of the New Baptist Plan, threatened last week, wherein she goes on Verena-directed dates. This part was confusing. Verena says that the men were recommended by her dentist (???), which is a big “MA’AM, WHAT?!” but the point of this phase is also unclear. All these men are awful to Plum in their own special ways. Is that the point?

The first one, for example, doesn’t even go out with her. Once she opens the door and he sees her, he shoves a bouquet at her and then he leaves. The second one, Aiden (Desmin Borges), seems nice, but ghosts her at dinner when she’s in the restroom. When the third one was a little too eager, I knew right away that he was going to turn out to be a feeder. And what a not surprise–he is!

After she finally realizes that she’s just a fetish to this guy, Plum tells him off and literally storms out, followed by her own personal rain cloud. We then see a glimpse here of her coping mechanism. She’s gotta be stuffed as a tick after eating all that in the food court, especially since she’s been dieting. But she immediately buys a hot dog. They don’t call it comfort food for nothin’. 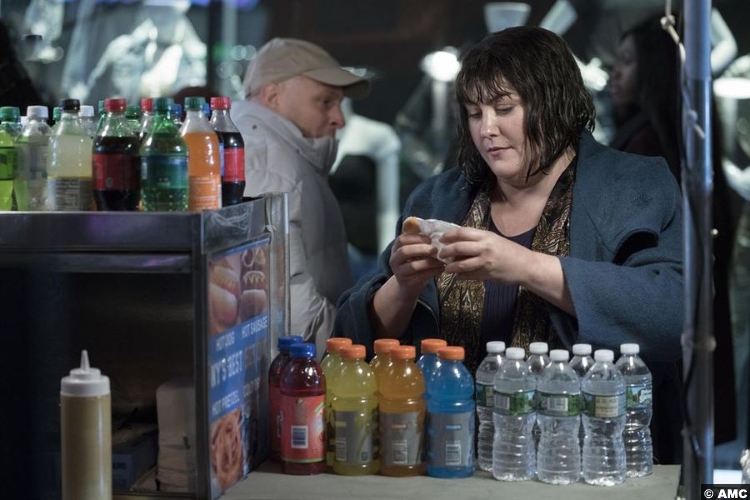 Unfortunately, there’s little comfort in the streets these days, as a man walks directly into her hot dog and then berates her with the very kind “Get your eyes off your food, fatass, and watch where you’re going!” Her pushed-down feelings finally explode and she smushes the hot dog into his shirt before spitting the rest onto him. As an example of the charming, decent man we already know he is, he punches her in the face. Then Dominic, who’s been following her, punches him.

Dominic calls Bobby (Marc Blucas, who will always be Riley Finn, sorrynotsorry), a cop buddy, to arrest the guy and before he carts him away, Bobby tells Dominic to bring the family over for dinner. Uh-oh. That’s how Plum finds out about Dominic’s marriage and children. And as a giant news screen nearby proclaims Leeta as the possible “face of Jennifer,” Plum gives up or gives in, showing up at Calliope House to tell Verena, “I’m ready.” Ready for what, though, boo?

8/10 – As I said, I don’t really understand the point of the date phase. Is it like a shock doctrine where Verena’s trying to force Plum to feel her own feelings? If so, there are surely a lot kinder ways to go about that. As for the rest, I think Stella Cross’s murder is going to have serious repercussions. Women and others can be complicit in their own oppression, but they can often be punished for being close to their oppressors. Even Plum, though she’s trying to be “balanced,” seems to imply that Stella was almost asking for what happened to her. And some people felt that way about the men they killed. But what is their ultimate message? What about the groundskeeper they injured this week or the tabloid magnate’s son they traumatized last week? Where are we going from here? And perhaps most importantly, can I have Kitty’s entire wardrobe?