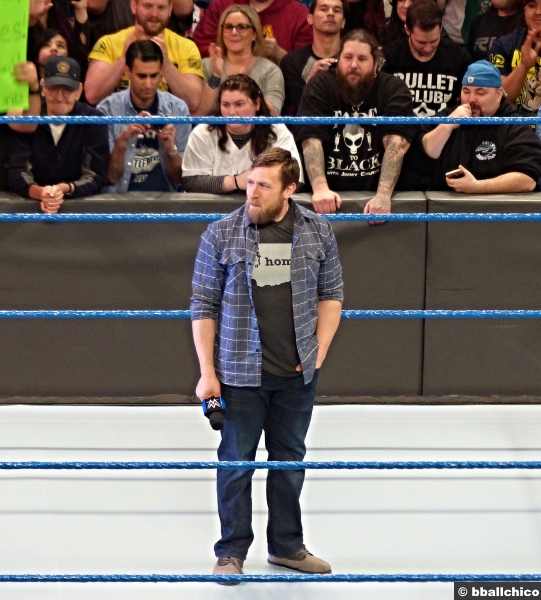 Five nights before he returns to in-ring competition at WrestleMania where he will team with SmackDown LIVE Commissioner Shane McMahon to face Kevin Owens & Sami Zayn in a match where Owens & Zayn must win to get their jobs back, the last SmackDown LIVE before WrestleMania kicks off with SmackDown LIVE General Manager Daniel Bryan. The GM welcomes everyone to SmackDown LIVE before introducing his tag team partner at WrestleMania, SmackDown LIVE Commissioner Shane McMahon, who makes his first appearance since being hospitalized with diverticulitis and a ruptured hernia. Shane first congratulates Daniel Bryan on being medically cleared to compete before saying that he had an umbilical hernia courtesy of Kevin Owens & Sami Zayn, saying that he has also been medically cleared and they are going to give it “everything” they’ve got at WrestleMania.

Daniel Bryan says that Shane warned him about Kevin Owens & Sami Zayn’s motivations before apologizing to the Commissioner. Shane admits that he can be a bit “hot-headed” and “stubborn” at times. Daniel says that he’s learned that, when tag team partners have their differences, there is only one way to “resolve it” before stretching his arms out for a hug from Shane. However, Shane instead offers a handshake but Daniel says that Nashville doesn’t want to see a handshake, they want to see them “hug it out”. Shane says that he’s not much of a hugger but Daniel and the crowd insist so Shane relents as the GM and the Commissioner hug it out in the middle of the ring. The GM then vows to get “payback” for everything that Kevin Owens & Sami Zayn before asking the crowd if they’re ready to see Daniel Bryan & Shane McMahon beat the “holy hell” out of Kevin Owens & Sami Zayn at WrestleMania, sparking a “yes” chant from the crowd.

Before she defends the SmackDown Women’s Title against Asuka this Sunday at WrestleMania, the opening match of the night would see SmackDown Women’s Champion Charlotte Flair go one-on-one with Natalya in a non-title match. During the match, Charlotte Flair and Natalya would knock each other down with simultaneous clotheslines and this is when “Ms. Money-in-the-Bank” Carmella would rush out with her Money-in-the-Bank briefcase and a referee in tow, ready to cash in. However, Charlotte would punt Carmella’s briefcase out of the ring before dropping Carmella with a big boot. Natalya would then try to capitalize with a roll-up but Charlotte would kick out before locking Natalya in the Figure-Eight, making Natalya tap out to pick up the win. After the match, Charlotte would be confronted by her WrestleMania opponent, Asuka, as “The Empress of Tomorrow” makes her way to the ring. Asuka tells Charlotte that, at WrestleMania, “The Queen” will bow down to “The Empress”. The champion then snatches the microphone away from Asuka, asking Asuka if she is “ready”.

Before they are a part of the Fatal 4-Way Match for the United States Championship this Sunday at WrestleMania along with United States Champion Randy Orton and Bobby Roode, “The Lion of Bulgaria” Rusev, with Aiden English in his corner, would go one-on-one with “The Modern Day Maharaja” Jinder Mahal, with Sunil Singh in his corner, with Bobby Roode a guest on commentary. During the match, Rusev would knock Sunil Singh off of the ring apron before blasting Jinder Mahal with the Machka Kick, pinning Jinder to pick up the win. After the match, Rusev’s celebration would be interrupted by United States Champion Randy Orton, who emerges out of nowhere to take “The Lion of Bulgaria” out with the RKO! This brings Aiden English into the ring as Aiden puts the boots to Orton before getting on the second rope. However, this is when Bobby Roode would get on the ring apron, shoving English right into an RKO by Randy Orton. Roode then enters the ring, picking up the United States Title and handing it to “The Viper” as the two stare each other down.

Five nights before they are all a part of the Andre The Giant Memorial Battle Royal at WrestleMania, the team of Tye Dillinger, Zack Ryder, and Breezango would face Baron Corbin, Mojo Rawley, Primo Colon, and Dolph Ziggler in an 8-Man Tag Match. In the end, it was Baron Corbin hitting Fandango with the End of Days, pinning Fandango to pick up the win for his team.

Despite being fired, Kevin Owens & Sami Zayn would crash SmackDown LIVE as Owens & Zayn grab microphones and get on the announce table. Owens declares that SmackDown LIVE is still the “Sami & Kevin Show” and nothing is going to stop them from speaking their minds. Sami then says that they will not be “sorry” for what they do to Daniel Bryan at WrestleMania before apologizing to Daniel’s wife and daughter for the man they send back to them after WrestleMania. Sami then says that it is their “dream” to destroy Daniel Bryan this Sunday before Owens declares that it will be their “WrestleMania moment” before Sami mocks the fans by chanting “we deserve it”. Owens then turns the focus to Shane McMahon as Owens vows to send Shane back to Titan Towers to cry on his daddy’s lap. However, this is when Kevin Owens & Sami Zayn’s microphones are cut off before security and referees chase Owens & Zayn into the crowd. Daniel Bryan & Shane McMahon then come out to the stage as Daniel says that this will be the very last time that they will see Owens & Zayn on SmackDown LIVE before Shane leads the crowd in singing “nananana, hey, hey, hey, goodbye” as Kevin Owens & Sami Zayn angrily exit through the crowd.

Then it was time for the main event as WrestleMania opponents would join forces as the team of WWE Champion AJ Styles and his WrestleMania opponent Shinsuke Nakamura would face Chad Gable & Shelton Benjamin. In the end, it was AJ Styles looking right at Shinsuke Nakamura before he delivers the Phenomenal Forearm to Chad Gable, pinning Gable to pick up the win for himself and Nakamura. After the match, AJ Styles would grab his WWE Title belt and start to head to the back but this is when Shelton Benjamin would attack Nakamura from behind with AJ Styles slowly getting on the ring apron as the WWE Champion appeared to be in no hurry to come to the aid of his WrestleMania opponent. However, Nakamura would not need AJ’s help as Nakamura takes care of Shelton Benjamin on his own before AJ Styles would pay Nakamura back for last week as the WWE Champion acts like he is going to hit Nakamura with the Phenomenal Forearm only to stop short. AJ then grins at Nakamura with the challenger smiling back before the WWE Champion pats Nakamura on the head, which angers “The Artist” as AJ Styles leaves the ring with a big smile on his face, having proven that he is no slouch when it comes to playing mind games.

What did you think of the last SmackDown LIVE before WrestleMania? Post your comments in the box below.