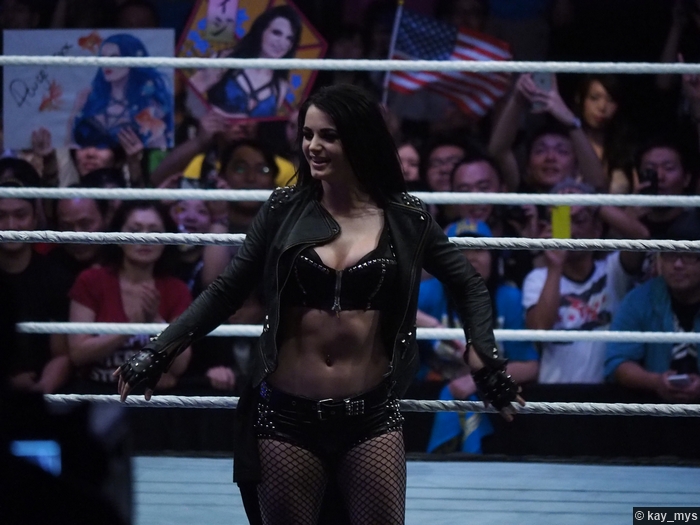 One night after an emotional and heartfelt speech where she officially announced her retirement from in-ring competition due to neck injuries, Paige would make her way to the ring as the former Divas Champion receives a thunderous response from New Orleans as the new SmackDown LIVE General Manager is welcomed with open arms. Paige says that, after announcing her retirement on RAW, she walked to the back for what she thought was the last time and the first person to greet her was Shane McMahon, thanking the Commissioner. The crowd then chants “this is your house” in support of the new GM before getting down to business. Paige then says that Daniel Bryan has not competed on TV in over three years before saying that Daniel will compete tonight. The new GM then teases the fans on who Daniel’s opponent will be before making the blockbuster announcement that Daniel Bryan will go one-on-one with WWE Champion AJ Styles! The new SmackDown LIVE General Manager then leaves the ring with the SmackDown LIVE Commissioner, having already made an impact on her first night on the job.

After winning the WrestleMania Women’s Battle Royal on the WrestleMania Kickoff, Naomi would go one-on-one with Natalya on SmackDown LIVE. In the end, it was Naomi hitting the split-legged moonsault, pinning Natalya to pick up the win.

Peyton & Billie then leave the ring, providing the perfect opportunity for “Ms. Money-in-the-Bank” Carmella to rush to the ring with her Money-in-the-Bank briefcase, bringing a referee to the ring with her. Carmella then hands the briefcase to the referee, repeatedly screaming at the referee that she’s cashing in her Money-in-the-Bank contract. Finally, the referee informs the ring announcer that Carmella is cashing in. The referee then checks on Charlotte, who is pulling herself to her feet, to make sure the champion is ready to compete. The referee then rings the bell to make the impromptu SmackDown Women’s Title match official and Carmella is quick to deliver a super kick to Charlotte, securing the three-count to become the brand new SmackDown Women’s Champion! Elated and emotional, Carmella celebrates with her first championship in WWE, parading around the ring with the SmackDown Women’s Title before standing tall in the ring, proudly showing off the title.

Then it was time for a dream main event come true as, following his successful defense of the WWE Title against Shinsuke Nakamura at WrestleMania, WWE Champion AJ Styles would go one-on-one with Daniel Bryan in a non-title match. During the match, AJ Styles would go for the Styles Clash but Daniel Bryan would counter into the Yes Lock with the WWE Champion getting to the bottom rope to break the hold. Shortly after this, Daniel would try to suplex AJ off of the top rope but Styles would counter on the way down, resulting in Styles landing on Bryan’s face. This would leave both men down and this would be when Shinsuke Nakamura would enter the ring, kicking Daniel in the back of the head to end the match by disqualification. Nakamura then sets his sights on AJ Styles, hitting AJ with another low blow before taking the WWE Champion out with the Kinshasa before “The Artist” picks Styles up just to low blow AJ a second time. Nakamura then leaves the ring with a sinister smile on his face, having ruined the dream match between AJ Styles and Daniel Bryan.

What did you think of the SmackDown LIVE after WrestleMania? Post your comments in the box below.