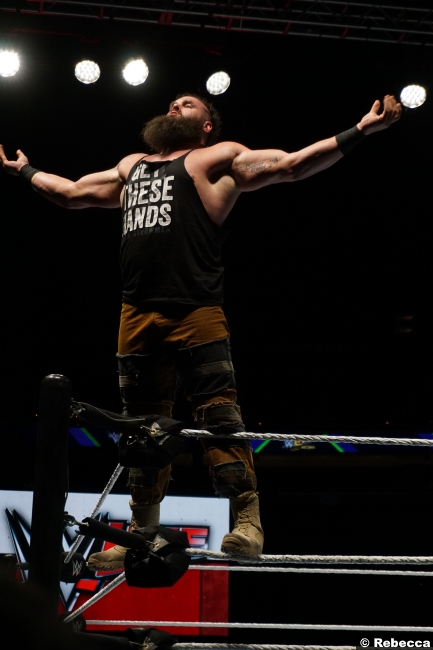 As WWE continues to expand and evolve globally, the company would embark on a huge new venture to bring live WWE action to as many countries as possible as WWE presents The Greatest Royal Rumble, which came to you, live on the WWE Network, from the King Abdullah Sports City Stadium in Jeddah, Saudi Arabia. Saudi Arabia would bear witness to the biggest Royal Rumble Match in WWE history as, for the first time ever, 50 WWE Superstars would compete in the over-the-top rope contest. Featuring the likes of RAW General Manager and WWE Hall of Famer Kurt Angle, the returning Chris Jericho, former WWE Champion Rey Mysterio, newly inducted WWE Hall of Famer Mark Henry, former World Heavyweight Champion The Great Khali, as well as Daniel Bryan, Kevin Owens, SmackDown LIVE Commissioner Shane McMahon, The New Day, Bobby Roode, Elias, Baron Corbin, Dolph Ziggler, Braun Strowman, and many, many more, the 50-Man Royal Rumble Match will, without a doubt, be historic.

The King Abdullah Sports City Stadium would also be home to a rematch for the Universal Championship as, after his savage and shocking defeat of Roman Reigns at WrestleMania, “The Beast” Brock Lesnar would put his Universal Title on the line against “The Big Dog” one more time but, this time, these two bitter rivals would be locked inside a Steel Cage! Having reigned as Universal Champion for well over a year now, Brock Lesnar has put down every challenger that has stood before him but perhaps no challenger has been more persistent than Roman Reigns as Roman has been trying to slay “The Beast” for the better part of two years only to come up short but after coming so close to dethroning Brock Lesnar at WrestleMania, could this rematch finally be when Roman Reigns finally takes the title from “The Beast”? Can even a Steel Cage contain these two powerhouse athletes who have shown in the past that they will do whatever they have to in order to destroy the other? Who will leave Jeddah as the Universal Champion and what will be the cost of the victory?

After Shinsuke Nakamura’s disrespectful and unexpected actions at WrestleMania where, after losing to AJ Styles in their match for the WWE Championship, “The Artist” would low blow the champion and would continue to do so in the weeks that followed, Nakamura has refused to explain his actions but what we do know is that these two would go one-on-one for the WWE Title one more time at The Greatest Royal Rumble as “The Phenomenal” AJ Styles would certainly be looking for payback when he puts the WWE Title on the line against “The Artist” Shinsuke Nakamura.

Two Superstars who have clashed more than a few times over the years would renew their rivalry at The Greatest Royal Rumble as, for the first time in eight years, sixteen-time former World Champion John Cena would go one-on-one with fourteen-time World Champion Triple H! WrestleMania was a disappointing night for both of these combatants as John Cena was dominated by The Undertaker in an impromptu WrestleMania showdown while Triple H and his wife, Stephanie McMahon, were defeated by Kurt Angle & Ronda Rousey. With both Superstars appearing for the first time since those WrestleMania losses, both John Cena and Triple H will certainly be looking to rebound by defeating their familiar rival.

Speaking of The Undertaker, “The Deadman” would also be making his first post-WrestleMania appearance at The Greatest Royal Rumble as, for the first time in a decade, The Undertaker would compete in a match that he has become synonymous with in his WWE career, the Casket Match as “The Phenom” would face “The Lion of Bulgaria” Rusev where the only way to win is by putting your opponent in a casket and shutting the lid.

The Intercontinental Championship would also be decided at The Greatest Royal Rumble in a Ladder Match as Seth Rollins would make his first defense of the prestigious title against former champion The Miz, Finn Balor, and Samoa Joe where the first Superstar to climb a ladder and retrieve the Intercontinental Title hanging high above the ring will be the champion. Also, after Braun Strowman and Nicholas voluntarily relinquished the RAW Tag Team Titles the night after WrestleMania, RAW General Manager Kurt Angle set up a Tag Team Eliminator series to determine who would face former champions Cesaro & Sheamus for the vacant titles at The Greatest Royal Rumble and this series would ultimately be won by the bizarre team of Matt Hardy & Bray Wyatt, who would face Cesaro & Sheamus with the winners being crowned the new RAW Tag Team Champions.

After a dominant performance at WrestleMania where they defeated The Usos and The New Day in a Triple Threat Tag Match to win the SmackDown Tag Team Titles, The Bludgeon Brothers would put the titles on the line at The Greatest Royal Rumble as Harper & Rowan would defend the SmackDown Tag Team Titles against former champions The Usos. Also, the Cruiserweight Championship would be on the line in Jeddah as, after defeating Mustafa Ali on the WrestleMania Kickoff to claim the vacant Cruiserweight Title, Cedric Alexander would make his first defense of the title against former champion Kalisto.

See page 2 for order of entry and eliminations.