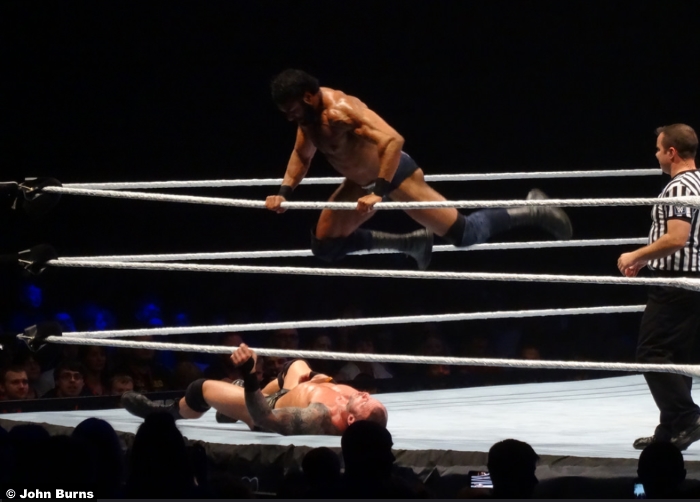 SmackDown LIVE kicks off with interviewer Dasha Fuentes in the ring as Dasha would conduct an in-ring interview with SmackDown Women’s Champion Charlotte Flair as well as the challenger for the SmackDown Women’s Title this Sunday at Fastlane, the leader of The Riott Squad, Ruby Riott, who comes out with Liv Morgan & Sarah Logan with Riott telling Liv & Logan to hang back. Dasha says that this whole thing started when Ruby attacked Charlotte Flair a month ago, but Ruby Riott cuts Dasha off, saying that Dasha Fuentes is “ill informed” before dismissing Dasha from the ring. Riott explains that this all started when Charlotte Flair won the SmackDown Women’s Title in November, saying that Charlotte’s title win made her the first Superstar to win the NXT Women’s, Divas, RAW Women’s, and SmackDown Women’s Titles in history. Ruby continues, saying that she watched as the “myth” began to form, the myth that Charlotte was the “personification of the women’s revolution”, and that is why, two weeks after Charlotte won the title, she formed The Riott Squad with the sole purpose of “destroying the myth”.

Charlotte argues that she hasn’t been handed anything because of being a Flair, saying that she has had to work harder than anyone else because of who she is. The SmackDown Women’s Champion then says that she has to carry the “weight of expectation” on her shoulders, saying that her “failures” reflect her entire family. Charlotte then says that she has to be “transcendent” and her accomplishments prove that she has “transcended” anything about her, saying that she is “every bit as good” as Ruby Riott has heard that she is. Riott responds by saying that that is what makes this so exciting, saying that Charlotte is “on a pedestal” and all of that is on the line at Fastlane this Sunday. Ruby then vows to take Charlotte’s “crown” and Charlotte’s reality is going to “crumble”, leaving Charlotte “another bleach blonde failure with a famous last name”! Charlotte then gets in the face of her Fastlane opponent before Liv Morgan & Sarah Logan enter the ring. However, with The Riott Squad about to attack Charlotte Flair, United States Champion Bobby Roode would come out, rescuing his Mixed Match Challenge partner.

With United States Champion Bobby Roode a guest on commentary, his Fastlane opponent, “The Viper” Randy Orton, would go one-on-one with “The Modern Day Maharaja” Jinder Mahal, with Sunil Singh in his corner, in the opening match of the night. During the match, Jinder Mahal would roll to the outside to try and escape Randy Orton with “The Viper” not far behind. However, Jinder would then shove Sunil Singh into Randy Orton and Orton would respond by dropping Sunil onto the announce table. This would allow Jinder to catch Orton with a right hand before Jinder tries to send Orton back into the ring but Orton counters as “The Viper” tosses Jinder right into Bobby Roode! Back in the ring, Orton would size Jinder up for the RKO but Bobby Roode would get on the ring apron, drawing the attention of “The Viper” and Jinder would take advantage by delivering a knee to the back of Orton, sending Orton into Roode, knocking the United States Champion off of the ring apron. Jinder then hits Orton with the Khallas, pinning Orton to pick up the win. This leaves Jinder standing victorious, getting the better of Bobby Roode and Randy Orton once again.

Backstage, an interview with 2018 Royal Rumble Match winner Shinsuke Nakamura is interrupted by Rusev & Aiden English as Rusev is upset over Nakamura beating Aiden last week. Rusev would challenge Nakamura to a match at Fastlane this Sunday with Nakamura accepting the challenge, saying that, when he beats Rusev this Sunday, it will be “Nakamura Day”. Nakamura then exits as Rusev says that Nakamura can’t just make up his own holiday.

Five nights before he defends the WWE Title in a Six Pack Challenge at Fastlane, WWE Champion AJ Styles would address his title defense on SmackDown LIVE. AJ says that he doesn’t have to be pinned to lose the WWE Title, saying that the odds are stacked against him once again. AJ says “to hell with fair”, vowing to “fight” to keep the WWE Title this Sunday before saying that, sometimes, “life” gets the better of them and, sometimes, they don’t win. Styles continues, saying that he got pinned clean by John Cena last week, saying that Cena is a “world class athlete”. The WWE Champion then addresses what John Cena had to say on RAW, saying that Cena isn’t the only one who needs to win at Fastlane. AJ then says that Cena brought up that, if Styles loses the title at Fastlane, he could make the WWE Title match at Fastlane a Triple Threat Match. However, Styles says that he doesn’t want that and neither do the fans, saying that he wants his “WrestleMania moment” and that moment is taking the WWE Title to WrestleMania and defending it against Shinsuke Nakamura, who AJ calls “the best”. Styles continues, saying that he’s not just fighting for himself at Fastlane, he’s fighting for “us”, vowing that it will be “nothing short of phenomenal”.

This brings out Dolph Ziggler, who makes his way to the ring as he says that AJ Styles isn’t “phenomenal” anymore, saying that AJ is “desperate”. Styles fires back, saying that Dolph has been in WWE for thirteen years and still hasn’t achieved his “full potential”. Ziggler responds by saying that it took AJ a “decade” to walk into the house that he built before telling the WWE Champion that he is going to “lose” this Sunday. Dolph explains that AJ is going to lose because Styles is too focused on doing it for the fans, saying that they will all stab AJ in the back as soon as Styles lets them down, saying that it happened to him. Dolph continues, saying that he was told to his face that he would never be a champion in WWE but he found a way to become World Heavyweight Champion. Ziggler says that he proved night in and night out that he is the “best thing to happen to this company” and the fact that he is yet to have one singles match at WrestleMania is “criminal”. Dolph then says that Styles can take his dream match and “shove it” with AJ responding by saying that they should have their scheduled match right now!

AJ Styles would get his wish as the WWE Champion would go one-on-one with Dolph Ziggler in a non-title match before they are both a part of the Six Pack Challenge for the WWE Title at Fastlane this Sunday. During the competitive match, Dolph Ziggler would score with the Zig Zag to AJ Styles, leaving both men down in the ring. This would provide the perfect opportunity for Kevin Owens & Sami Zayn to rush in and pounce on Styles and Ziggler, bringing an end to the match as Owens & Zayn beat AJ and Dolph down. However, AJ and Dolph are able to battle back, sending Owens & Zayn out of the ring. Much to the chagrin of Kevin Owens & Sami Zayn, SmackDown LIVE Commissioner Shane McMahon comes out to the stage, saying that the fans are probably expecting him to make a tag team match. The Commissioner says that he and SmackDown LIVE General Manager Daniel Bryan are always trying to bring “the best” to SmackDown LIVE. With that, Shane does not make a tag team match, but he instead makes an impromptu Fatal 5-Way Match between AJ Styles, Dolph Ziggler, Kevin Owens, Sami Zayn, and Baron Corbin!

Five of the six competitors in the Six Pack Challenge for the WWE Title at Fastlane this Sunday would face each other on SmackDown LIVE as WWE Champion AJ Styles, Kevin Owens, Sami Zayn, Baron Corbin, and Dolph Ziggler would compete in a non-title Fatal 5-Way Match where the first Superstar to earn a pinfall or submission would win the match. At the end of a chaotic match, Kevin Owens & Sami Zayn would clear the ring of every other competitor but this would give Sami Zayn the opportunity to show his true colors as Sami blasts his unsuspecting best friend with the Helluva Kick, pinning Kevin Owens to pick up the win! As Sami Zayn celebrates, AJ Styles has a look of realization on his face, realizing that, if the same thing happens this Sunday, he will lose the WWE Title. Kevin Owens would eventually come to, realizing that he had just been betrayed by his best friend, staring slack-jawed at Sami. Zayn is then interviewed about his actions with Sami saying that he is “the best that WWE has” before saying that tonight was about who is the best and he proved tonight that that is Sami Zayn.