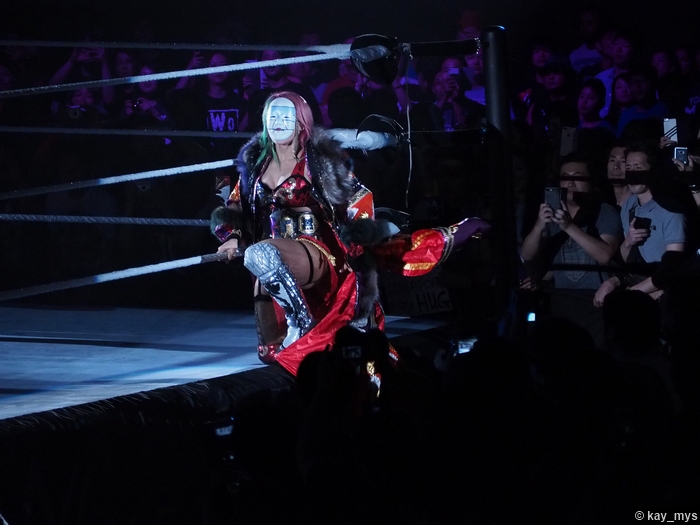 With Michael Cole, Corey Graves, and the returning Jonathan Coachman on commentary, RAW kicks off with RAW Commissioner Stephanie McMahon. Stephanie welcomes everyone to RAW before recounting what happened in the first ever Women’s Royal Rumble Match before saying that the “game changed” with the debut of WWE’s newest Superstar, “Rowdy” Ronda Rousey. The Commissioner then says that tonight is about the woman who won the Women’s Royal Rumble Match as Stephanie introduces “The Empress of Tomorrow” Asuka, who earned the right to challenge for either the RAW Women’s Title or the SmackDown Women’s Title at WrestleMania. Stephanie congratulates Asuka on her victory before saying that Asuka may want to wait to make her decision because Alexa Bliss may not even be the RAW Women’s Champion come WrestleMania. The Commissioner then announces that, in four weeks, Alexa Bliss will defend the RAW Women’s Title in the first ever all-women’s Elimination Chamber Match at WWE Elimination Chamber!

Stephanie then says that this is Asuka’s moment, letting the Women’s Royal Rumble Match winner speak. After speaking in Japanese, Asuka would declare that she will be the champion at WrestleMania because “no one is ready for Asuka”. Asuka is then interrupted by “The Boss” as Sasha Banks makes her way to the ring to confront “The Empress of Tomorrow”. Sasha says that last night was a “dream come true”, saying that she wanted to come out there and congratulate Asuka before saying that she proved at the Royal Rumble that she can “go the distance”. Sasha then proclaims that she is “ready for Asuka” and she is ready for Asuka tonight with Stephanie making the match official as Sasha and Asuka go face-to-face in the ring.

The opening match of the night would be an Elimination Chamber Qualifying Match as “The Monster Among Men” Braun Strowman would face “The Big Red Machine” Kane in a Last Man Standing Match, where the only way to win is to make sure that your opponent cannot stand by the referee’s count of ten, with the winner earning a spot in the #1 Contender’s Elimination Chamber Match, which will decide who will challenge Brock Lesnar for the Universal Title at WrestleMania! It would not take long for the two monsters to battle into the crowd before Braun Strowman uses a steel chair on the back of Kane before Braun uses an anvil case to smash Kane against a steel barricade. The battle then heads to the announce position by the stage and this is when “The Monster Among Men” would show his insane strength by not just tipping over the announce table onto Kane, but the entire side-section of the stage, platform and all, on top of “The Big Red Machine”!

With Kane presumably squashed underneath the wreckage, the referee doesn’t even waste his time with a ten-count, calling for the bell and declaring Braun Strowman the winner! Braun then stomps to the back as referees, agents, and medical personnel tend to Kane. Braun then comes out to the stage and Corey Graves asks Strowman about his actions with Braun offering a simple explanation, saying that Kurt Angle made it Last Man Standing and, since he’s the last man standing, he did his job.

With Braun Strowman already qualifying, the second Elimination Chamber Qualifying Match would see “Woken” Matt Hardy go one-on-one with Elias with the commentary team being relocated to ringside during the match. During the match, Matt Hardy was about to put Elias away but a distraction from Bray Wyatt would distract Matt long enough for Elias to take advantage, hitting Matt with the Drift Away, pinning Matt to pick up the win and qualify for the #1 Contender’s Elimination Chamber Match. After the match, Bray Wyatt would appear on the Tron, laughing maniacally at Matt Hardy.

After The Miz used the exposed middle turnbuckle to aid him in beating Roman Reigns for his eighth Intercontinental Title, the rematch would take place on RAW as The Miz, with The Miztourage in his corner, would defend the Intercontinental Title against Roman Reigns. During the match, Roman Reigns would become fed up with The Miztourage and would chase The Miztourage off with a steel chair to make sure the match stays one-on-one. During the match, the referee would try to stop The Miz from removing the middle turnbuckle cover and The Miz would spot his opening to deliver a thumb to the eye of Roman Reigns, following it up with the Skull Crushing Finale but Roman kicks out.

Shortly after this, The Miztourage comes back out with Bo Dallas helping The Miz out of the ring while Roman Reigns drops Curtis Axel with a right hand. Roman then takes Bo Dallas out before rolling The Miz back into the ring. Reigns then pulls Bo Dallas into the ring before Roman delivers a Superman Punch to Curtis Axel, knocking Axel off of the ring apron. Roman then turns his attention to Bo Dallas, taking Bo out with the Spear but Roman’s pre-occupation with The Miztourage would cost the challenger as The Miz would surprise Reigns with a roll-up, getting the three-count to successfully retain the Intercontinental Title.

After defeating Gallows & Anderson on the Royal Rumble Kickoff, The Revival would face Heath Slater & Rhyno in tag team action on RAW. In the end, it was The Revival hitting Rhyno with the Shatter Machine with Dash Wilder pinning Rhyno to pick up the win for The Revival.

Following a confrontation earlier in the night, RAW would see Women’s Royal Rumble Match winner Asuka go one-on-one with “The Boss” Sasha Banks, who lasted the longest in the Women’s Royal Rumble Match. During a hellacious match, Sasha Banks would lock in the Bank Statement but Asuka would manage to counter into the Asuka Lock, making Sasha tap out to pick up the grueling win.

In the third Elimination Chamber Qualifying Match of the night, the Superstar who lasted 57 minutes, 38 seconds in the Men’s Royal Rumble Match, Finn Balor, with Gallows & Anderson in his corner, would go one-on-one with the man who eliminated him, John Cena, with the winner joining Braun Strowman and Elias in the #1 Contender’s Elimination Chamber Match. After Finn Balor survives the Attitude Adjustment and the STF of John Cena, Cena would resort to using an Attitude Adjustment off of the second rope to finally put Finn Balor away as Cena picks up the win to qualify for the #1 Contender’s Elimination Chamber Match. As Finn struggles to come to on the outside, Cena sits on the top rope and points to the WrestleMania sign as the sixteen-time former World Champion comes one step closer to punching his ticket to WrestleMania.

What did you think of the post-Royal Rumble RAW? Post your comments in the box below.