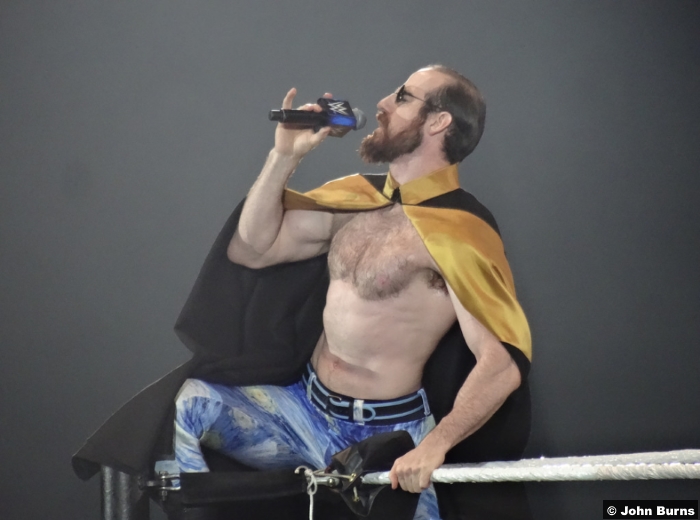 After Sami Zayn helped Kevin Owens defeat Randy Orton last week in a no disqualification match where Sami Zayn was banned from ringside, SmackDown LIVE kicks off with Kevin Owens & Sami Zayn. Kevin Owens that he has learned that a McMahon will “stop at nothing” to get their “pound of flesh” before Owens & Zayn bring up Daniel Bryan, Bret Hart, and Stone Cold Steve Austin as past examples. Owens then says that they are the “latest objects of the McMahon family’s wrath” before saying that Shane McMahon tried to use his “vessel of destruction” Randy Orton to end his career. Owens continues, saying that, for years, Randy Orton has had every opportunity “given to him” while he and Sami have had to scratch and claw to get every opportunity they’ve gotten on SmackDown LIVE. Sami says that Shane’s plan didn’t even work before Owens says that he knew that he had to beat Randy Orton up so badly that Orton would not even be an option before saying that he knew that he had to “outsmart” Shane McMahon. Owens then says that it’s not tough to outsmart a man who is “blinded by his own shortcomings”.

Sami Zayn then gives a tour of the arena, explaining that he “laid waste” to Randy Orton with a steel chair on the entrance ramp, not at ringside, which is where he was banned from being thanks to Shane McMahon. Sami then says that the SmackDown LIVE Commissioner needs to choose his words more carefully before saying that he and Owens “worked within the system” and they still “won”. However, with Kevin Owens alone in the ring, it would be the perfect opportunity for Randy Orton to catch the best friends by surprise as “The Viper” strikes with the RKO to Kevin Owens! SmackDown LIVE Commissioner Shane McMahon then comes out to the stage to announce that, at Clash of Champions, Kevin Owens & Sami Zayn will take on Randy Orton and a partner of his choosing! In addition, Shane would announce that, tonight, Sami Zayn will go one-on-one with Randy Orton before adding the stipulation that Kevin Owens will be handcuffed to the ropes during the match!

Before he defends the United States Title against both Bobby Roode and Dolph Ziggler in a Triple Threat Match at Clash of Champions, United States Champion Baron Corbin would go one-on-one with “Glorious” Bobby Roode in a non-title match with Dolph Ziggler a guest on commentary. During the match, Dolph Ziggler would slide into the ring and deliver the Zig Zag to Bobby Roode, ending the match by disqualification before Dolph delivers a Zig Zag to Baron Corbin as well, making a statement ahead of Clash of Champions.

After finding out that she will defend the SmackDown Women’s Title against Natalya in a Lumberjack Match with Carmella, Naomi, Tamina, Lana, and The Riott Squad surrounding the ring at Clash of Champions, SmackDown Women’s Champion Charlotte Flair would go one-on-one with Tamina, with Lana in her corner, in a non-title match with Natalya and Carmella lurking at ringside. In the end, it was Charlotte Flair locking in the Figure-Eight, making Tamina tap out to pick up the win. After the match, Natalya says that she is going to take the SmackDown Women’s Title back at Clash of Champions before she’s interrupted by the arrival of The Riott Squad. Ruby Riott says that they should give Charlotte a “preview” of the Lumberjack Match before Ruby Riott, Liv Morgan, & Sarah Logan confront the women on the outside, leading to a brawl between Tamina and Sarah Logan that has to be broken up by their respective sides as Charlotte Flair manages to escape unscathed for the time being.

After being threatened with a suspension by SmackDown LIVE General Manager Daniel Bryan, Kevin Owens would have no choice but to allow himself to be handcuffed to the bottom rope for the duration of the main event, which would see Sami Zayn go one-on-one with Randy Orton. During the match, Sami Zayn would procure bolt cutters from under the ring but Sami would interrupt Sami’s attempt to free Kevin Owens before sending Owens into the ring post. Shortly after this, Kevin Owens would manage to get a hold of the bolt cutters, cutting the handcuffs to free himself before getting on the ring apron, only to get knocked down by Randy Orton. Orton then sizes Sami up for the RKO before Kevin Owens provides another distraction but Zayn would fail to take advantage of the opening. Sami then goes for the Helluva Kick but Orton would get out of the way before rolling Sami up, scoring the three-count to pick up the win.

However, there would be no time for celebration as Kevin Owens would attack Randy Orton from behind before Sami Zayn joins in, leading to a two-on-one beatdown of “The Viper”. This would bring out Shinsuke Nakamura, who rushes out to make the save as “The Artist” would take it to both Kevin Owens & Sami Zayn before leveling Owens with the Kinshasa, leaving Sami Zayn all alone to be dropped with the RKO by Randy Orton! Orton & Nakamura were not through there as Nakamura would lift Owens back up so that Orton could deliver an RKO to Owens. “The Viper” then returns the favor, holding Sami Zayn in place for the Kinshasa from Nakamura. This leaves Randy Orton & Shinsuke Nakamura standing tall as it becomes apparent that Nakamura will be Orton’s partner at Clash of Champions.

Backstage, Shane McMahon is telling Daniel Bryan that the ending to SmackDown LIVE was “satisfying” with Daniel asking if Shane was done “punishing” Kevin Owens & Sami Zayn. The Commissioner says that he’s just getting “warmed up” before revealing that he will be the Special Referee for the tag match at Clash of Champions, adding that, if Owens & Zayn lose to Randy Orton & Shinsuke Nakamura, then Owens & Zayn will not only be fired from SmackDown LIVE, but from the entire WWE! Shane then exits as Daniel glares at the Commissioner as Shane once again proves that he will stop at nothing to rid WWE of Kevin Owens & Sami Zayn.