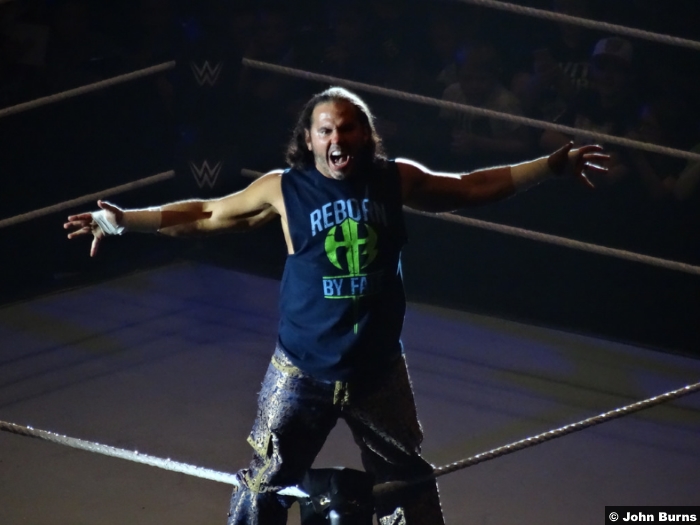 RAW kicks off with RAW General Manager Kurt Angle as the GM would reveal the next challenger for Roman Reigns’ Intercontinental Championship. After making his way to the ring and welcoming everyone to RAW, Kurt says that, in addition to the match for the RAW Tag Team Titles, they are going to have an Intercontinental Title match here tonight. However, before the GM can reveal who will challenge Roman Reigns for the title, Kurt is interrupted by his son, Jason Jordan, who makes his way to the ring. As fans boo Jason Jordan and chant things like “delete”, Jason tells his father that he wants Roman Reigns tonight. Kurt points out that Jason’s knee is still taped up but Jordan says that he can do this, saying that Roman Reigns laid out an open challenge to anyone to step up and try to take the Intercontinental Title. Jason continues, saying that he knows that he can beat Roman Reigns and he just needs his dad to give him a “chance”. This brings out Intercontinental Champion Roman Reigns, who joins Kurt Angle and Jason Jordan in the ring. Roman does not back down, saying that he’s going to defend his title tonight, but it’s not going to be against Jason Jordan, saying that he wants Samoa Joe. Reigns then tells Jason Jordan that, if he wants an opportunity, Jason needs to “step up and take it”, not ask his “daddy”.

Jason Jordan laughs this off, saying that Roman Reigns is the “poster boy” for what WWE management wants. Roman argues that he’s been on a lot of “posters” and that’s because he’s “earned it”, saying he’s “grinded for seven years straight”. This brings out the man that L.A. was clamoring to see as Samoa Joe comes out to the stage, saying that, as much as he likes to see them “pretend to talk tough”, his patience has run thin. Joe then says that, if Roman is done patronizing Jason Jordan, then he accepts Roman’s challenge before saying that he’s going to give Reigns “five seconds” to withdraw his challenge and avoid the embarrassment of what they both know and that is that Roman cannot beat him. Jason Jordan says that, unlike Samoa Joe, he is “tough” and he doesn’t attack people from behind, he issues challenges to their face and that is what he’s doing right now before Jason challenges Samoa Joe to a match! Roman then backs Jason Jordan up before telling Joe that the five seconds are up. This is when Jason Jordan would spin Roman Reigns around and deliver a belly-to-belly suplex to the Intercontinental Champion! Kurt then restrains his son, getting Jason to leave the ring before a seething Roman Reigns gets to his feet, telling Samoa Joe that he can wait until later tonight because Jason Jordan can get it right now, ordering Kurt to make the match official and the GM does just that!

Backstage, Jason Jordan confronts his father, Kurt Angle, saying that the GM has to give him another chance as he wants a rematch with Roman Reigns next week but, tonight, he wants a match against Samoa Joe. Kurt says that he doesn’t have to do anything, saying that he doesn’t want Roman Reigns or anyone else thinking that he’s “playing favorites” before telling his son that he will take it “under advisement”. Jason then turns to leave the office when he’s blindsided by an enraged Samoa Joe as Joe shoves Jordan into the wall. As the GM checks on his son, Samoa Joe shouts at Jason Jordan before turning to Kurt Angle and telling Kurt “like father, like son” before leaving the office.

After Absolution absolutely laid waste to Sasha Banks last week, Sasha would get her shot at revenge as “The Boss” would bring Bayley & Mickie James with her for backup as Sasha would go one-on-one with Absolution leader Paige, with Mandy Rose & Sonya Deville in her corner, with RAW Women’s Champion Alexa Bliss a guest on commentary. During a hard-fought match, Paige would go for the Ram Paige but Sasha Banks would counter into the Bank Statement with Paige just barely getting to the ropes to force the break. Paige then rolls the outside before Sasha brings Paige back into the ring, but this would spark a face-off between Bayley & Mickie James and Mandy Rose & Sonya Deville on the outside. The confrontation would then lead to a brawl between the two sides with Mandy & Sonya getting the better of Bayley & Mickie. However, the attack would draw the attention of Sasha Banks and Paige would take advantage, delivering a kick to “The Boss” before planting Sasha with the Ram Paige, pinning Sasha for the win. After the match, Absolution would again administer a beatdown on Sasha Banks with Mandy Rose dropping “The Boss” ribs first onto Sonya Deville’s knee. Absolution then stand tall in the ring, having again laid waste to Sasha Banks, Bayley, & Mickie James.

With Rich Swann advancing to the #1 Contender’s Match next week, a Fatal 4-Way Match would determine Rich Swann’s opponent next week as Cedric Alexander, Drew Gulak, Tony Nese, and Mustafa Ali would square off with the first Superstar to score a pinfall or submission winning the match. In the end, Cedric Alexander would take Tony Nese out with the Lumbar Check but Tony Nese would fall out of the ring so Cedric would hit Mustafa Ali with the Lumbar Check. However, before Cedric could make the cover, Drew Gulak would jump in and take out Cedric before stealing the pin for himself as Drew Gulak wins the Fatal 4-Way Match and will face Rich Swann on next week’s RAW with the winner becoming the #1 Contender for the Cruiserweight Title.

A performance by Elias is then interrupted by Braun Strowman as “The Monster Among Men” makes his way to the ring. However, Elias would not want any of Braun Strowman and would quickly leave the ring, waiting until Braun turned his back to attack. Elias would then continue to try and take “The Monster Among Men” down, even smashing his guitar over Braun’s back but the behemoth would shake it off. Braun then brings Elias back into the ring, flattening Elias with the running powerslam before “The Monster Among Men” tosses both halves of the steel steps into the ring. However, this is when Kane’s music would draw Braun Strowman’s attention to the Tron where Kane tells Braun that he delights in “pain” before saying that they will go one-on-one next week where “only one monster will emerge” before Kane concludes by laughing evilly at the thought of dishing out more pain to Braun Strowman.

“The Empress of Tomorrow” was in action on RAW as Asuka would go one-on-one with Alicia Fox. In the end, it was Asuka locking in the armbar, making Alicia Fox tap out to pick up the win. After the match, Absolution would come out to confront Asuka and, just like last week, the trio would let Asuka leave the ring in peace. With Alicia Fox still in the ring, Paige would confront Alicia, saying that Alicia is her friend and that Alicia is the only one that “liked” her. Paige then says that Alicia is her “best friend” before saying that she loves Alicia but she doesn’t think that Mandy Rose & Sonya Deville feel the same way. With that, Mandy & Sonya would attack Alicia as Mandy hits a knee to the face of Alicia before Sonya delivers a sliding knee strike, leaving Alicia laid out. Absolution then again stand tall in the ring, having kept up their firm domination of the RAW women’s division.

Finn Balor was in action on RAW as Finn would go one-on-one with one-half of The Miztourage in Bo Dallas, with Curtis Axel in his corner. In the end, it was Finn Balor hitting the Coup de Grace on Bo Dallas, pinning Bo for the win.

After awakening the shattered inner psyche of Matt Hardy last week, Bray Wyatt would make an appearance on the Tron to address Matt Hardy. Bray says that he and the universe both know who Matt Hardy is but he doesn’t think that Matt Hardy himself knows. This is when Bray’s speech is interrupted by Matt Hardy as the newly woken Matt says that, for “millennia”, his soul has wandered through “space and time” but not all who wander are “lost”. Bray’s speech would then resume with “The Eater of Worlds” unaware that his feed was hijacked. Bray says that Matt is a “fool” and an “illusion” to mask his own failures and that Matt has no idea what is actually “real”. Matt then interjects again, saying that he is well versed in “all facets of the multiverse” and that he has battled alongside Genghis Khan, danced with Cleopatra, and meditated atop the great pyramid of Giza.

Bray then says that the “ramblings of a madman” can be very “dangerous” especially for those who listen. Matt then says that, due to his “condition”, he has laid dormant inside the “vessel” known as Matt Hardy but, now, thanks to the “consumer of terrestrial entities”, he has been “woken”! Bray then says that last week was not Matt Hardy’s “breaking point”, it was his. Bray says that he feels “alive” again and there is a “fire” building inside him and his fire will make sure that all of them will “burn”. Matt responds by saying that Bray has left him no choice but to sentence him to “deletion” before Bray and Matt exchange their own maniac laughter.

Then it was time for the main event as the RAW Tag Team Championship would be on the line as Cesaro & Sheamus would defend the RAW Tag Team Titles against Dean Ambrose & Seth Rollins. During the wild title match, Seth Rollins would score with the Knee to Cesaro but Sheamus would break up the pinfall attempt, stomping away at Seth before kneeing Dean Ambrose off of the ring apron. Sheamus would then continue to stomp and pummel Rollins to the point that the referee has no choice but to end the match by disqualification, meaning that Cesaro & Sheamus keep the RAW Tag Team Titles. Cesaro & Sheamus then grab their title belts and start to head to the back, but they are stopped by Kurt Angle as the GM rules that the title match will be restarted right now and, this time, the match will have no disqualifications!

Elated at getting a second chance at the RAW Tag Team Titles, Dean Ambrose & Seth Rollins would dive to the outside, taking it to Cesaro & Sheamus before Dean Ambrose brings Cesaro back into the ring. Ambrose & Rollins then isolate Cesaro but would fail to put Cesaro away with a clothesline followed by a frog splash. However, as Ambrose & Rollins size up Cesaro, Samoa Joe gets involved in the match, clubbing Seth Rollins before planting Dean Ambrose with a uranage. This brings out Roman Reigns, who makes a beeline for Samoa Joe with Joe quick to escape into the crowd. Roman drops Cesaro with the Superman Punch before continuing his pursuit of Samoa Joe. Meanwhile, in the ring, Sheamus takes advantage of a dazed Dean Ambrose, leveling Dean with the Brogue Kick before throwing Cesaro on top of Ambrose with Cesaro scoring the three-count as Cesaro & Sheamus once again take advantage of chaos to walk out as the RAW Tag Team Champions. Samoa Joe and Cesaro & Sheamus then gloat in the crowd as The Shield regroups in the ring, realizing that they were outsmarted.