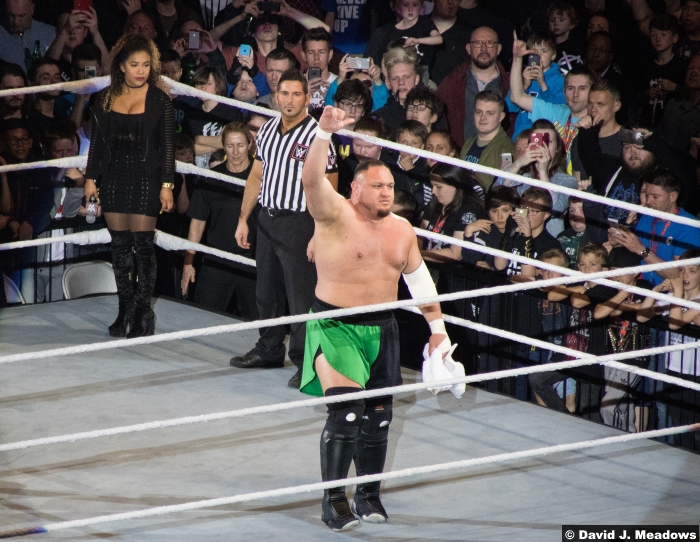 The 1280th edition of WWE Monday Night RAW came to you, live, from the Staples Center in Los Angeles, CA. As RAW rolls into “The City of Angels”, the RAW Tag Team Championship would be decided as Dean Ambrose & Seth Rollins would invoke their rematch clause to challenge Cesaro & Sheamus for the RAW Tag Team Titles as Ambrose & Rollins look to join their Shield brethren, Roman Reigns, as champions in WWE. Speaking of Roman Reigns, the new Intercontinental Champion made good on his promise to be a “fighting champion” when he defended the prestigious title against Elias on last week’s RAW. However, the bigger story came after the match as Roman Reigns would get ambushed by Samoa Joe on the stage as Joe would lock in the Coquina Clutch, leaving the Intercontinental Champion laid out. How will Roman Reigns respond to Samoa Joe’s attack? Also, after Absolution took out her scheduled tag team partners, Bayley and Mickie James, last week, Sasha Banks was given an ultimatum by Paige, Mandy Rose, & Sonya Deville to either join their group or suffer a similar fate as Bayley and Mickie. “The Boss” would refuse to join the dangerous trio and would end up paying the price as Absolution would lay waste to Sasha. Now, on this week’s RAW, Sasha will get her shot at revenge when she goes one-on-one with the leader of Absolution, Paige. Can “The Boss” stop this destructive trio by defeating their leader or will Paige further prove that Absolution is a force to be reckon with in the RAW women’s division?