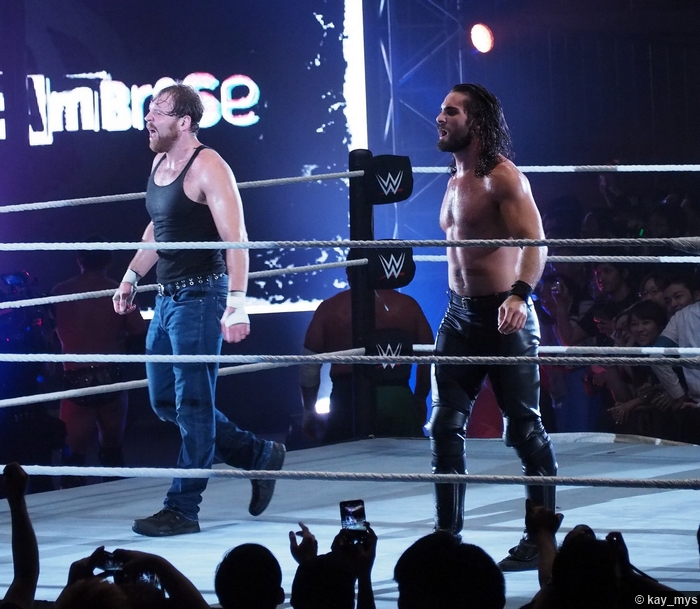 With last week’s #1 Contender’s match between Braun Strowman and Kane ending in a double count-out, RAW General Manager Kurt Angle would kick off RAW, saying that, by the end of the night, he will decide who will face Brock Lesnar for the Universal Championship at the Royal Rumble. The GM is then interrupted by “The Monster Among Men” Braun Strowman, who marches down to the ring and says that he was the only one standing last week and that is why he should be Brock Lesnar’s opponent at the Royal Rumble. This brings out “The Big Red Machine” Kane, who makes his way to the ring, saying that he has caused more destruction than anyone in WWE for over twenty years. Kane then says that there is no way that anyone is stepping in line ahead of him, saying that, while Brock Lesnar’s list of victims is impressive, it does not include him. Kane then says that he will get his shot at the Universal Title at the Royal Rumble unless Braun is “man enough” to try and stop him.

Things then get even more interesting with the arrival of Paul Heyman, who says that they cannot have this discussion without the current titleholder before introducing his client, Universal Champion Brock Lesnar. “The Beast” fearlessly makes his way down to the ring and, sensing the volatile situation before him, Kurt Angle is quick to announce that, at the Royal Rumble, Brock Lesnar will defend the Universal Title in a Triple Threat Match against both Braun Strowman and Kane! Kurt then makes a quick exit before Brock, Braun, and Kane circle the ring, sizing each other up before Kane fires the first shot against Brock Lesnar before Brock sends Braun Strowman over the top rope to the outside. Kane then grabs the Universal Champion by the throat but Brock counters, planting “The Big Red Machine” with the F-5! Brock then exits the ring, heading up the ramp before the Universal Champion’s demeanor changes once he sees Kane sit up from the F-5!

The opening match of the night was then set to be Seth Rollins taking on Samoa Joe, but Seth Rollins instead gets Jason Jordan, who says that he’s been asking for a match with Samoa Joe for the last two weeks. Jason then says that he’s done asking, telling Rollins that, if Seth has a bone to pick with Samoa Joe, Rollins will have to pick the bones when he’s done with them. Rollins then says that he knows that Jason Jordan thinks that this is his big opportunity before Samoa Joe interrupts, saying that, since they both want a match with him, they should have a match right now to decide who will get beat down and put to sleep by him. However, Seth argues that the match has already been made between him and Joe, saying that Jason Jordan can go and look for his “daddy’s approval” somewhere else. Jason responds to this by shoving Seth Rollins down which is all Seth needed to accept the changed matchup.

After the debuting Hideo Itami rescued Finn Balor from a two-on-one beatdown at the hands of The Miztourage, an impromptu tag team match would take place on RAW as the team of Finn Balor & Hideo Itami would face The Miztourage. In the end, it was Finn Balor taking out Bo Dallas on the outside while, on the inside, Hideo Itami hits the GTS on Curtis Axel, pinning Axel to pick up the win for himself and Finn Balor.

In a rematch that was originally supposed to take place last week before Absolution got involved, “The Empress of Tomorrow” Asuka would go one-on-one with Alicia Fox on RAW. In the end, it was Asuka locking in the armbar, making Alicia Fox tap out to pick up the win.

In a match made by Kurt Angle earlier in the night, the unique team of Dean Ambrose, Seth Rollins, and Jason Jordan would face Samoa Joe and RAW Tag Team Champions Cesaro & Sheamus in a 6-Man Tag match. During the chaotic match, Seth Rollins would dive to the outside to take out Samoa Joe and Cesaro, but Seth’s tag team partner Dean Ambrose would get caught as well as Ambrose immediately goes down clutching his heavily taped elbow. The referee then checks on Dean before calling for the ringside doctor. Seth would then hesitate before deciding to head back into the ring, but Cesaro & Sheamus were lying in wait as Sheamus blasts Rollins with the Brogue Kick before Cesaro scores the pinfall, picking up the win for his team.

After besting his goldfish, Napoleon, in a rousing game of chess, “Woken” Matt Hardy had some “woken wisdom” to bestow upon the world as Matt says that, now that the “new battlefield” has been set, the great war against Bray Wyatt and his “evil, heinous queen” Sister Abigail must be stopped, saying that Bray and Sister Abigail must be “deleted”. Matt then chants “delete” before laughing maniacally.

Backstage, Dean Ambrose is receiving further medical attention for his injured right elbow with Seth Rollins by his side when Samoa Joe and Cesaro & Sheamus ambush the two members of The Shield. The trio first toss Seth Rollins into the wall before Samoa Joe slams an anvil case shut on the injured arm of Dean Ambrose, leaving Ambrose writhing in pain on the floor as the doctor calls for assistance.

In a rematch from last week’s Tribute to the Troops, the team of Sasha Banks, Bayley, & Mickie James would face all three members of Absolution in a 6-Woman Tag match. During the match, Mandy Rose & Sonya Deville would pay no attention to the rules, beating down Sasha Banks until the referee calls for the bell, ending the match by disqualification. After the match, Absolution would look to continue their beatdown of Sasha Banks before Nia Jax makes a beeline for the ring with Absolution not backing down. The powerhouse takes it to both Mandy Rose & Sonya Deville, flattening them both with a double Samoan Drop. Paige then pounces on Nia Jax, chop blocking Nia before Absolution swarms Nia Jax. However, the rest of the RAW women’s division then rushes down to the ring, sparking another huge brawl among the division. The fighting then comes to a quick halt with the arrival of RAW Commissioner Stephanie McMahon!

Stephanie says that, three years ago, a revolution started in WWE and it was started by the women of WWE. The Commissioner then says that the women became headliners just like the men. Stephanie then says that the women have inspired the world with their “courage” and their “unbridled talent” before asking the women if they want to “make history” once again. The Commissioner then makes the blockbuster, earth-shattering announcement that, for the first time in the three decade history of the Royal Rumble, there will be an all-women’s Royal Rumble Match! Stephanie then leads the crowd in a “yes” chant as the elation is evident on the faces of the women of RAW, realizing that, on January 28 in Philadelphia, they will once again make history.