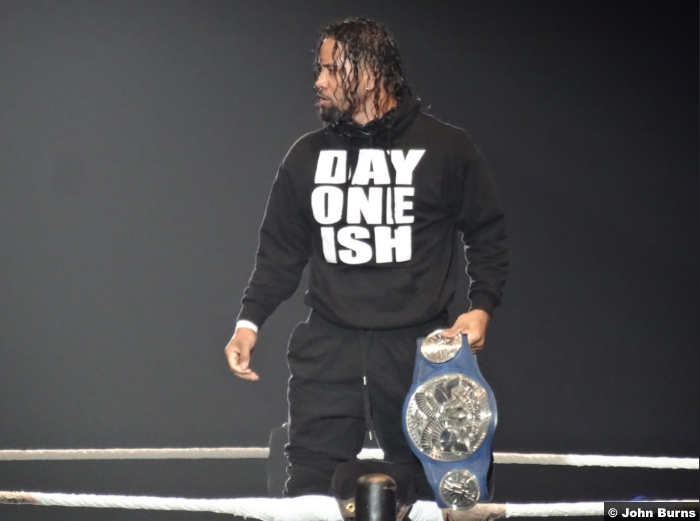 During the match, Rusev & Aiden English would come within an eyelash of winning the titles but Chad Gable would manage to kick out before Aiden English tags in Rusev. Rusev then locks in the Accolade on Chad Gable before Big E breaks it up with Rusev catching Big E with the Machka Kick, but Big E manages to kick out! Rusev then locks in the Accolade on Big E with Chad Gable breaking it up with a suplex to Rusev before delivering a suplex to Aiden English as well. Gable then delivers a roll-through suplex to the larger Big E before Jey Uso catches Gable with a pair of super kicks, allowing Jimmy Uso to take flight with the Uso Splash to Chad Gable, pinning Gable to successfully retain the SmackDown Tag Team Titles for The Usos in a show-stealing match.

With the SmackDown LIVE women’s division divided, the SmackDown Women’s Championship would be on the line at Clash of Champions as Charlotte Flair would defend the SmackDown Women’s Title against Natalya in a Lumberjack Match, where Carmella, Naomi, Tamina, Lana, and all three members of The Riott Squad would surround the ring as lumberjacks. As expected, chaos would ensue during the match and a super kick from Tamina to Charlotte Flair from the outside would give Natalya the opportunity to lock in the Sharpshooter with the champion making it to the bottom rope to force the break. Chaos would then continue amongst the competitors in the match and the lumberjacks with Ruby Riott & Liv Morgan even attacking Carmella just as Carmella was about to cash in. The lumberjack brawl would then spill back to the outside before Charlotte dives to the outside, taking out the lumberjacks.

Natalya then pounces on Charlotte, sending the champion face-first into the ring post before rolling Charlotte back into the ring. Natalya then goes for the Sharpshooter but Charlotte counters, locking in the Figure-Eight, making Natalya tap out to successfully retain the SmackDown Women’s Title. After the match, Natalya would be interviewed about the loss as Natalya accuses Charlotte Flair of using her family’s name to “cut corners” before saying that she has carried the women’s division for ten years and they have treated her with “nothing but disrespect”. Natalya then says that, if the fans and her fellow women want to turn their backs on her, she is turning her back on them! Natalya then exits the ring with crocodile tears in her eyes.

Then it was time for a unique tag team match where the WWE careers of two main event Superstars would be on the line as Kevin Owens & Sami Zayn would face Randy Orton & Shinsuke Nakamura in a match where, if Kevin Owens & Sami Zayn lose, they will both be fired from WWE and, in addition, both SmackDown LIVE Commissioner Shane McMahon and SmackDown LIVE General Manager Daniel Bryan would serve as Special Referees for the match. After some initial confusion early on in the match between the two referees, Shane McMahon and Daniel Bryan would decide to each establish a side of the ring as their own territory. Later on in the match, the action would spill to the outside of the ring and the two Special Referees would decide to not count either team out, looking on as Kevin Owens & Sami Zayn isolate Shinsuke Nakamura before Sami holds Nakamura in place so that Owens can put Nakamura through the announce table with a frog splash!

Shortly after this, it would come down to Randy Orton and Sami Zayn in the ring as “The Viper” would plant Sami with his patented DDT before striking with the RKO, but when Orton goes for the pin, a desperate Kevin Owens would shove Daniel Bryan down and Daniel would land right on top of Shane, stopping the count! This would enrage Shane McMahon as the Commissioner would shout in the face of Daniel Bryan that “that was three!” Daniel tries to explain what happened to Shane before Randy Orton gets in the face of the GM. Kevin Owens then tries to attack Orton from behind but “The Viper” was able to thwart the attack with an RKO to Owens! Orton then looks to pick up where he left off with Sami Zayn but Sami would try to surprise Orton with a roll-up, leading to both Orton and Sami exchanging roll-ups with Shane counting for Orton while Daniel would count for Sami. However, when Sami would secure a roll-up on Orton, Shane would count to two before deliberately stopping his count despite Orton not kicking out!

Outraged, Daniel Bryan would get in the face of the Commissioner, sparking a heated argument amongst the SmackDown LIVE management. However, when Shane turns his back to Daniel for a moment, Sami would roll Orton up again and, this time, Daniel Bryan would administer a lightning quick three-count and, despite Shane trying to stop it, the damage was done as Kevin Owens & Sami Zayn win the match, keeping their jobs in the most controversial way imaginable! After the match, Daniel Bryan raises the hand of Sami Zayn outside the ring as Shane McMahon sits in the ring in disbelief as Randy Orton & Shinsuke Nakamura are livid over the match’s conclusion.

Then it was time for the main event as the most prestigious championship in WWE would be defended as AJ Styles would defend the WWE Championship against “The Modern Day Maharaja” Jinder Mahal, with The Singh Brothers in his corner. Early on in the match, AJ Styles would target the left leg of Jinder Mahal and Jinder would respond by exposing a section of the ringside barricade, sending the champion ribs-first into the exposed steel. The challenger then continues to target the mid-section of AJ Styles, slamming AJ ribs-first onto the announce table. The injured ribs would plague AJ Styles throughout the match but the champion would continue to fight through the pain, avoiding the Khallas off of the second rope before hitting the springboard 450 splash on Jinder. This is when The Singh Brothers would get involved, trying to pull Jinder out of the ring but AJ would stop Samir & Sunil before taking The Singh Brothers out on the outside, including the Styles Clash to one of The Singh Brothers on the floor.

Back in the ring, Jinder would connect with the Khallas with the challenger having to pull AJ to the center of the ring to keep AJ from getting to the ropes but AJ would kick out! Jinder would then try to use AJ’s own Styles Clash against him but the champion would counter into the Calf Crusher, keeping Jinder away from the ropes as Jinder would have no choice but to tap out as AJ Styles successfully retains the WWE Title. After the match, AJ proudly holds up the WWE Title belt as Jinder sits on the outside, clutching his leg, having come so close to regaining the WWE Title only to succumb to “The Phenomenal One”.

What did you think of Clash of Champions? Post your comments in the box below.