The Walking Dead S08E08: How It’s Gotta Be – In which a major death falls flat along with the rest of the season

Why do we still watch The Walking Dead? I know I’ve asked this question before, but I still haven’t found a decent answer. The halfway point of the eighth seasons seems like a good time to bring this up again. What do we get out of this show? What have we ever got out of this show? Do you remember the hype around Negan and the Saviours? Did you think it would be this bad? So many questions to mull over.

Let’s ignore them for a second and talk about Carl Grimes. The Walking Dead has been incredibly shy about killing off main cast members since Glenn and Abraham, so the death of Carl is a surprise at the very least. Carl is still alive in the comics, and since the show has been straight up adapting the comics from season four onwards we could be forgiven for taking Carl’s plot armour for granted. I’ll admit that I was completely shocked when I saw that Carl was bitten. Not because I thought he was safe, that illusion was fading as fast as Alexandria was burning. I thought Carl would go down fighting. Technically that’s exactly what happened, but it’s not as simple as that; but it’s still super dumb. 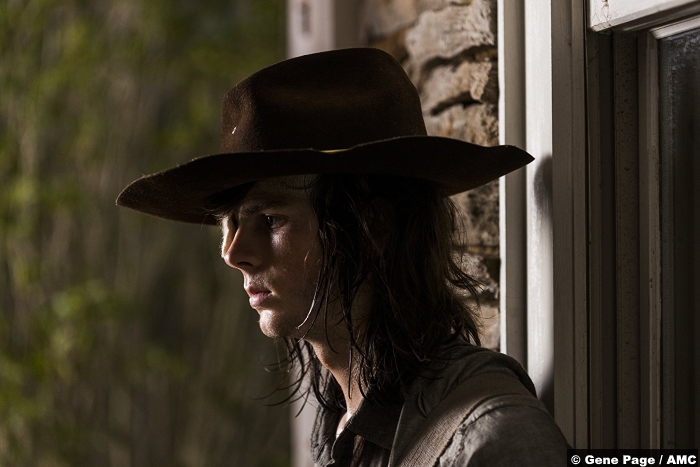 Here is where season eight’s biggest problem rears its ugly head: the passage of time. The non-linear structure of these eight episodes has been so nonsensical that its only purpose is to try and cultivate some dramatic weight. Since the writers are obviously beginners at this type of storytelling even the most avid viewer could get confused about what is happening when. This comes up with Carl getting bit. At first, I thought that he got bit in Alexandria by a walker attracted to the fire and noise. I was confused at the decision not to show the bite at all, even in a flashback. Then it occurred to me, we have already seen it. Remember that time when Carl and his new chum made a hash of fighting your typical walker? Yeah, that was when it happened, and it also took place earlier in the day in which this mid-season finale takes place. Again, I wouldn’t blame you for missing it, for it is confirmation that you are still sane.

Then it hit me: season eight is a puzzle box narrative. Obviously, I should have realised this at the beginning of the season due to Rick’s flashforwards, or whatever they were. Popularised by JJ Abrams and Damon Lindelof on Lost, puzzle box narratives are built on mysteries that the audiences can tease out along with the show. Westworld’s maze is one example, David Haller’s mind in Legion is another.  Using the manipulation of time to keep us unmoored from events, The Walking Dead has been trying to trick us in the way these shows do. Except The Walking Dead isn’t Westworld, The Walking Dead is dumb. By giving us the possible answer: Rick and Michonne alive, victorious, and with Judith, and the position of those Rick grief scenes, it’s challenging us to theorize what happened to get Rick to those two points. Well, the grief one has been solved: Coorraalll! 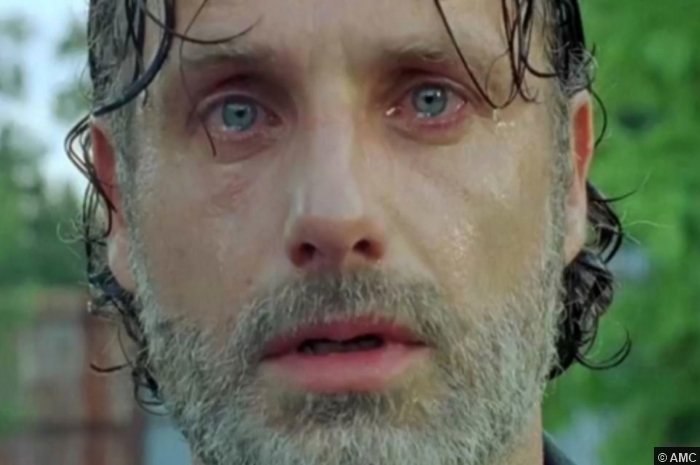 Except maybe it isn’t. Maybe Carl won’t die. It wouldn’t be the first time The Walking Dead has tried this, it’s not even the first time it’s tried this with Carl. Yet Carl’s survival would break the ironclad rule of the show: get bit in a place we can’t quickly cut off then you’re screwed. Would the writers be that stupid? We haven’t seen Carl dead yet, which probably means that Rick or his surrogate mother Michonne will have to finish him of in February. 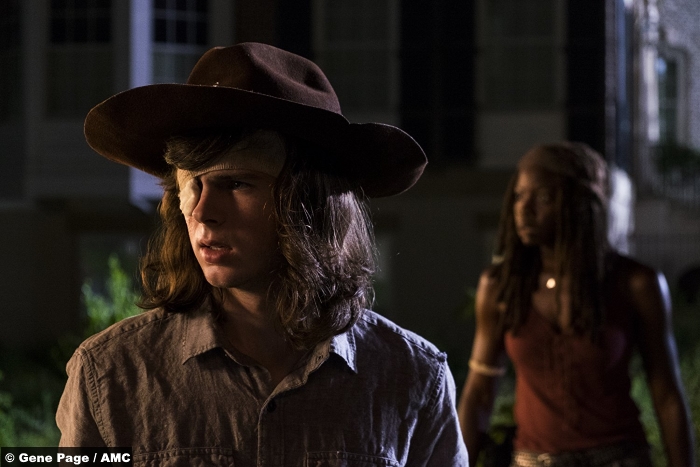 The rest of the episode was fine as these things go. The one-sided nature of this war was starting to grate, but it still feels a little late to have the Saviours rally. The destruction of Alexandria was fun to watch, mainly because I hate it, and Ezekiel saving his people was a silly fist-pumping moment. What this does highlight is The Walking Dead’s oldest, worst habit.

It’s clear looking at the full eight episodes of this season that they didn’t have enough story to fill it. As usual, the beginning and the end seemed planned, but to get from A to B led to a plodding narrative. It shouldn’t be this easy to sum up a full half season of TV, but here it goes. Rick’s side had Negan on the ropes for seven episodes, Eugene came up with a way out, Negan turns the tables. In between that we have meaningless casualties, garbage people, who just ran away (WHAT WAS THE POINT!) and Morgan looking at the ground. All of this was tied together by stupid string, like Jesus’ useless diplomacy, Gregory’s pancakes, or Enid’s shoot first policy that ruins any advantage. Oh, and Carl got killed by a typical walker, can’t forget that but I would rather forget Gabriel.

4/10 – Season eight has really filled those shitting pants. A calamitous crap in the khakis to paraphrase Eugene. Eight episodes of fighting was duller than all of the farm, Rick was either a one-man army, or an idiot when the plot called for it, and Shiva died. And yet I smile, because I finally have my answer as to why I still watch this show. It’s a blast to write about. See you in February.