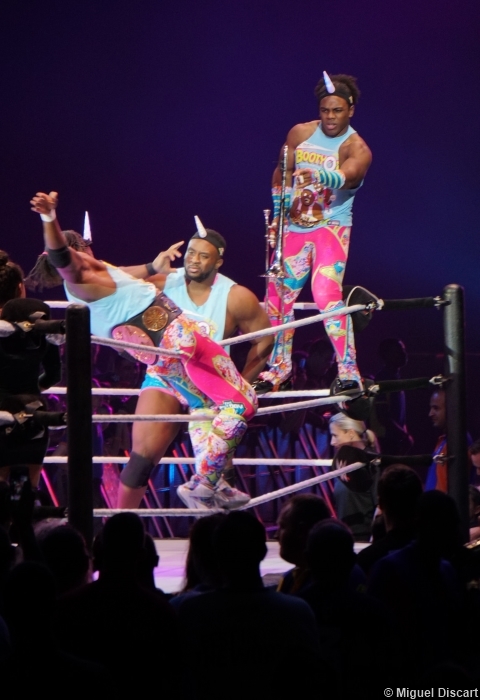 Shane then says that he wants to bring out three guys who fired a shot against RAW last night that’s “still going” before the Commissioner introduces The New Day who, one night earlier, invaded RAW and ultimately cost Dean Ambrose & Seth Rollins the RAW Tag Team Titles. The trio dance their way to the ring with Kofi Kingston saying that they didn’t mean to cost Ambrose & Rollins the tag titles but that was just a byproduct of putting RAW “under siege”. Xavier Woods then asks what Ambrose & Rollins are going to do about it, commenting that, since they are a part of the RAW roster, they are going to do “nothing” about it. Big E then says that they led the charge against RAW two weeks ago, saying that they looked RAW in the eye and “beat them down”. Xavier then says that, if anyone from RAW tries to retaliate, they will be right there to send them back to Monday nights. Shane then commends The New Day for being all about team blue, saying they put RAW under siege on a “whim” before dancing with The New Day and chanting “New Day rocks”.

This brings out Kevin Owens & Sami Zayn as Owens says that was the “stupidest” thing he’s ever seen in his life before Sami says that Shane is “not cool” and the Commissioner should probably never dance again. Sami then says that he and Owens could have showed up and beat up the RAW Superstars if they wanted to but they are “men of honor”. Sami continues, saying that Shane set them up to “fail” before saying that he lost to a “low blow” in his Qualifying Match before saying that, had he or Kevin Owens used those tactics, they would have been punished for it. Kevin Owens then says that they should not have even had to compete in Qualifying Matches, stating that they are the “top two Superstars” on the SmackDown LIVE roster. The New Day responds by insulting Kevin Owens & Sami Zayn with Sami saying that it’s going to be funny when Team RAW beats Team SmackDown LIVE and they have no one to blame but Shane McMahon. Shane says that Owens & Zayn have no brand loyalty and they think they are “entitled” before the Commissioner puts Sami Zayn in a match against Kofi Kingston and that match will take place right now.

In a match made by Shane McMahon, the opening match of the night would see The New Day’s Kofi Kingston, with Big E & Xavier Woods, go one-on-one with Sami Zayn, with Kevin Owens in his corner. In the end, it was Kofi Kingston hitting Sami Zayn with a high cross body, keeping Sami down for the three-count to pick up the win. After the match, Kevin Owens would pounce on Kofi Kingston but Big E is quick to chase Owens out of the ring.

With Team SmackDown LIVE members Naomi, Charlotte Flair, & Tamina, along with Lana, at ringside, SmackDown LIVE would present a special “Battle of the Sexes” as the team captain of the SmackDown LIVE women’s team Becky Lynch would go one-on-one with James Ellsworth, with “Ms. Money-in-the-Bank” Carmella in his corner. During the match, Becky Lynch would hit James Ellsworth with the Becksploder before Ellsworth rolls out of the ring. Ellsworth would then try to abandon the match, but Naomi, Tamina, Lana, & Charlotte Flair would block the way, forcing Ellsworth back into the ring. Ellsworth then tries to beg Becky off but Becky locks in the Dis-Arm-Her, making Ellsworth tap out to pick up the win as her Survivor Series team, with the exception of Carmella, applauds Becky’s victory. After the match, Carmella would get in the ring, helping James Ellsworth up before Carmella confronts Becky Lynch only for “Ms. Money-in-the-Bank” to surprise everyone by dropping her pet with a super kick! Carmella then grabs her Money-in-the-Bank briefcase and walks to the back as Becky continues to celebrate her victory.

Then it was time for the huge main event that could greatly alter the scheduled Champion vs. Champion Match in less than two weeks at Survivor Series as “The Modern Day Maharaja” Jinder Mahal, with The Singh Brothers in his corner, would defend the WWE Championship against “The Phenomenal” AJ Styles. During the match, AJ Styles would send Jinder Mahal to the outside before scoring with the Phenomenal Forearm. Back in the ring, the challenger would hit the springboard 450 splash on Jinder Mahal but The Singh Brothers would pull the WWE Champion to safety. Styles would respond by taking The Singh Brothers out on the outside and, after ensuring there would be no more outside interference, AJ would turn his attention back to Jinder Mahal in the ring.

AJ would look for the Phenomenal Forearm but the champion would move out of the way before connecting with the Khallas but AJ is able to get his foot on the bottom rope to keep the match going. Jinder would then try for a Khallas off of the top rope but Styles would counter, hanging “The Modern Day Maharaja” up on the top rope before connecting with the Phenomenal Forearm, pinning Jinder for the three-count to shock the world as AJ Styles becomes the brand new WWE Champion, marking the first time that the prestigious championship has changed hands outside of North America! After the match, Jinder Mahal was irate, shoving down The Singh Brothers as “The Phenomenal One” celebrates winning his second WWE Championship as AJ Styles now looks ahead to Survivor Series as it will now be WWE Champion AJ Styles going one-on-one with Universal Champion Brock Lesnar!