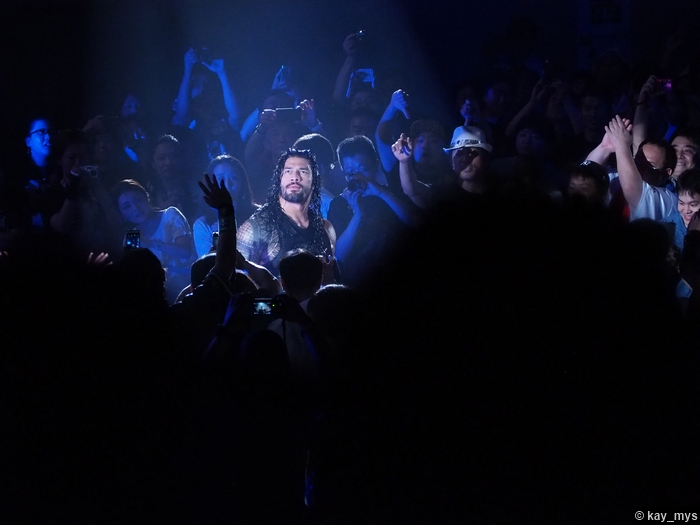 One week after his contract signing for No Mercy with Roman Reigns turned into a scathing, personal war of words, RAW would kick off with the sixteen-time former World Champion himself as John Cena would go one-on-one with Kurt Angle’s son Jason Jordan. In a career-making match, Jason Jordan would give John Cena all he could handle before the sixteen-time former World Champion locks in the STF. However, the amateur wrestling standout would counter the STF into a Crossface before Cena manages to power out. Jordan then hits a bridging Northern Lights suplex, rolling through and hitting a second bridging Northern Lights suplex, but Cena kicks out. Cena is then able to pull the Attitude Adjustment out of nowhere, planting Jason Jordan to finally put the up-and-comer away for the win. After the hard-fought match, Cena would help Jason Jordan to his feet, showing his respect for Kurt Angle’s son.

However, John Cena’s night was not finished there as Cena would be confronted by his No Mercy opponent, Roman Reigns. Roman says that, if Cena is as good as he says he is, then how come it took Cena over twenty minutes to beat a “rookie”. Reigns then says that Cena either dragged the match out intentionally to get Jason Jordan to believe in himself or Cena “lied” last week and Cena is not as good as he thinks he is. Roman then echoes what he said last week, calling Cena a “lying fake-ass little bitch”. Cena responds by saying that Roman Reigns is doing the worst thing he can do right now by using his brain, telling Roman that’s not his “strong suit”. Cena then tells Roman not to burn himself out, pointing out that Reigns’ zipper was open when he came out. Roman is quick to reply that he “busted it”, pointing out that he is a “big dog” after all. Cena continues, saying that Roman is going to get beat at No Mercy by a guy that either “lost a step” or a guy who’s been “stringing” him along for years just waiting for the opportunity to “chop” Roman down to size!

Cena then says that Roman is a “conceited, know-it-all golden boy who needs to be taught a lesson in respect” before saying that guys like Jason Jordan, Chad Gable, and even The Miz scratch and claw each and every week to earn his spot, saying that he respects that. Cena then looks Reigns right in the eye and says that he does not “respect” Roman Reigns! Cena continues, saying that the only person “living a lie” is Roman Reigns before saying that Roman claims that the ring is his “yard” but the fans don’t agree and Roman says he’s “the guy” but the fans don’t agree. Cena then asks if there is enough room in Roman’s brain to see what is going on here before asking if he has to “beat some common sense” into him. Reigns then dares Cena to “do it” before saying that this is Cena’s moment to finally back up his “big mouth”, again telling Cena to “do it”. However, when Cena doesn’t attack, Roman says that Cena is “all talk” and that is why he doesn’t respect John Cena! Roman then leaves the ring as Cena glares at “The Big Dog” with a smile on his face, clearly not impressed by Roman Reigns.

Before they get their rematch for the RAW Tag Team Titles in just under three weeks at No Mercy, Cesaro & Sheamus would face Heath Slater & Rhyno on RAW with RAW Tag Team Champions Dean Ambrose & Seth Rollins guests on commentary. In the end, it was Sheamus catching Rhyno with the Brogue Kick, pinning Rhyno to pick up the win for his team. After the match, Cesaro & Sheamus would stare Dean Ambrose & Seth Rollins down.

After winning a fifteen-man battle royal last week to earn the opportunity, the legendary Jeff Hardy, with Matt Hardy in his corner, would challenge The Miz, with Maryse & The Miztourage in his corner, for the Intercontinental Championship on RAW. During the match, The Miztourage would get involved as, with Bo Dallas distracting the referee, Curtis Axel would hang Jeff Hardy up on the top rope. This would get Matt Hardy involved as Matt would attack The Miztourage on the outside and this would result in the referee ejecting The Miztourage and Matt Hardy from ringside! In a back-and-forth match for the prestigious title, Jeff Hardy would connect with the Twist of Fate, but The Miz would manage to grab the bottom rope at the last second to save his title for the time being. Shortly after this, Jeff Hardy would go for the Swanton Bomb but Maryse would alert her husband just in time for The Miz to roll out of the way. Jeff then goes for the Twist of Fate again but The Miz would counter, hitting the Skull Crushing Finale and pinning Jeff Hardy to successfully retain the Intercontinental Title.

The Cruiserweights were in action on RAW as Enzo Amore would team with up Gran Metalik and Cedric Alexander to face the team of Tony Nese, Drew Gulak, and Noam Dar in a 6-Man Tag rematch from last week’s 205 Live. In the end, it was Enzo Amore giving Drew Gulak an illegal thumb to the eye behind the back of the referee before connecting with the Eat Defeat, pinning Gulak to pick up the win for his team.

After Bray Wyatt interfered in the battle royal last week and cost him a potential Intercontinental Title match, Finn Balor would appear on RAW to address “The Eater of Worlds”. Finn says that the Intercontinental Championship would have looked really good around his waist but Bray Wyatt cost him that opportunity. Finn then says that, the next time Bray appears, he will be “ready”, saying that he doesn’t “run” from his “demons” because, sometimes, he is one. Finn is then interrupted by Bray Wyatt, who appears on the Tron. Bray tells Finn that his “bare hands” judge them all before saying that Finn did not defeat him at SummerSlam, “The Demon” did before challenging Finn to a rematch at No Mercy, telling Finn to “make a choice”. Finn responds by saying that he knows exactly who he is, declaring that he is Finn Balor. Bray then asks if a “mere mortal” can topple a “god” at No Mercy or will Finn be like all the others and run around like a “scared, little rabbit” before telling Finn to “run”.

In a unique tag team match, new RAW Women’s Champion Alexa Bliss would team up with the woman she defeated for the title last week, “The Boss” Sasha Banks, to face the team of Nia Jax and Emma with the stipulation that, if Alexa and Sasha win, then their title rematch at No Mercy will remain one-on-one but, if Nia and Emma win, then Nia and Emma will be added to the title match at No Mercy, making it a Fatal 4-Way Match for the title. In the end, it was Emma tagging herself in before Nia Jax hits the big leg drop on Sasha Banks as Emma steals the pinfall to pick up the win for her team, meaning that the RAW Women’s Title match at No Mercy will now be a Fatal 4-Way Match as Alexa Bliss will defend the title against Sasha Banks, Emma, and Nia Jax! After the match, Emma would try to celebrate with Nia Jax but Nia was having none of it as the powerhouse would plant Emma with the Samoan Drop before leaving the ring.

Then it was time for a colossal main event as, with his Universal Championship showdown with Brock Lesnar at No Mercy less than three weeks away, “The Monster Among Men” Braun Strowman would collide with “The World’s Largest Athlete” Big Show in a Steel Cage Match, meaning that the two monsters will be locked inside of the unforgiving steel cage with the match ending by only pinfall, submission, or escaping the cage, either by exiting over the top of the cage or exiting through the door with both feet touching the floor! Early on, the two behemoths would take turns tossing their opponent into the side of the cage before Big Show actually tries to climb out of the cage. This leads to both super heavyweights battling on the top rope with Braun Strowman getting the better of “The World’s Largest Athlete”, racking Big Show up on the top rope. Not to be outdone, Big Show would knock Braun off of his perch, causing Strowman to crotch himself as well! Big Show then does the unthinkable, digging deep into his arsenal to hit a gigantic elbow drop off of the top rope to Braun Strowman! After Braun kicks out of an attempted pinfall, Big Show would crawl for the cage door but Strowman would stop “The World’s Largest Athlete” before Big Show uses the cage door as a weapon, slamming the door on Braun’s head. Shortly after this, Big Show is able to plant Braun Strowman with the chokeslam, but Braun kicks out! Braun then goes for the running powerslam but Big Show gets free before tossing Strowman into the side of the cage.

The two monsters then find themselves battling on the top rope once again with Big Show knocking Braun Strowman off of the top. “The World’s Largest Athlete” then nearly manages to climb up and over but Braun is able to pull Big Show back down. Big Show then climbs to the top rope before Braun catches Big Show, delivering a massive superplex with the re-enforced ring managing to stand up to the gigantic impact. “The Monster Among Men” then follows this up with the running powerslam, planting Big Show before pinning “The World’s Largest Athlete” to pick up the win in an unforgettable Steel Cage Match! After the match, Braun Strowman has a message for Brock Lesnar, pointing at Big Show as he declares that it is Brock Lesnar’s “future” while his future is the Universal Championship. However, Braun Strowman was not through there as “The Monster Among Men” would pick Big Show up again, slamming “The World’s Largest Athlete” into the side of the cage with enough force to break the side of the cage, sending Big Show through the cage to the outside! Braun then roars with intensity as referees come out to check on Big Show as the two giants once again leave destruction in their wake.