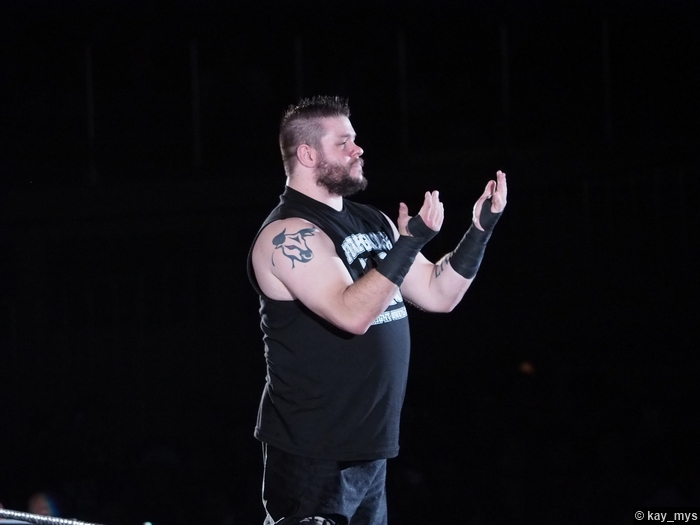 Before he teams up with Rusev to face the team of Shinsuke Nakamura and Randy Orton in the main event later in the night, SmackDown LIVE kicks off with WWE Champion Jinder Mahal with The Singh Brothers by his side. Jinder says that, tonight, he will be teaming up with Rusev to take on two of his biggest rivals in Shinsuke Nakamura and Randy Orton. The WWE Champion then says that he has been shown “nothing but disrespect”, saying that he should be “revered”. Jinder continues, saying he was made to look like a “fool” by Shinsuke Nakamura last week, saying that he’s not a fool, he is “the best of the best”. Jinder then says that someone must “pay the price”, turning his attention to The Singh Brothers. The Singh Brothers are quick to give a tearful public apology to the entire continent of Asia, their family, and, most of all, they want to apologize to Jinder Mahal. The Singh Brothers then say that they “embarrassed” the WWE Champion last week, blaming themselves for Shinsuke Nakamura getting the better of Jinder Mahal last week. The brothers then vow that they will never let Nakamura put his hands on Jinder again before saying that, as a way to apologize for their failure last week, they would like to kiss Jinder’s feet!

Just as The Singh Brothers are about to kiss the feet of their leader, the public apology is interrupted by the arrival of “The Artist Known As” Shinsuke Nakamura, who makes his way to the ring to confront Jinder Mahal & The Singh Brothers. Samir & Sunil are quick to stand between Nakamura and Jinder with Shinsuke shoving The Singh Brothers aside before getting in the face of the WWE Champion. “The King of Strong Style” then gets in a few shots on Jinder before The Singh Brothers intervene, leading to a three-on-one beatdown. However, Randy Orton comes to the aid of Nakamura before Rusev also joins the fray, leveling “The Viper” with a Machka Kick. Rusev then kicks Orton out of the ring before “The Bulgarian Brute” stands by as Jinder Mahal hits Nakamura with the Khallas, leaving Nakamura laid out in the middle of the ring.

After putting his rivalry with Kevin Owens behind him last week, United States Champion AJ Styles would appear on SmackDown LIVE to bring back the United States Title Open Challenge! Styles says that, last week, Kevin Owens lost his last chance at the United States Title as long as AJ is champion so now they can re-open the United States Open Challenge to the rest of the SmackDown LIVE, declaring that the Open Challenge starts right now. The man to answer the U.S. Open Challenge would be “The Perfect Ten” Tye Dillinger, but as Tye makes his way to the ring, he is halted by Baron Corbin, who takes issue with Tye answering the challenge that Corbin himself was going to answer. This leads to a shoving match between Dillinger and Corbin with Tye shoving Corbin down before resuming his walk towards the ring. However, Corbin would attack Tye from behind before Baron starts to get into the ring only for Dillinger to retaliate, sending “The Lone Wolf” into the ring post.

Following his SmackDown LIVE debut last week, Tuesday nights would once again become “glorious” as “Glorious” Bobby Roode would go one-on-one with Mike Kanellis, with Maria Kanellis in his corner. In the end, it was Bobby Roode planting Mike Kanellis with the Glorious DDT, picking up the glorious victory.

After failing to regain the United States Title against AJ Styles in a controversial match with Shane McMahon taking over for Baron Corbin as the Special Guest Referee last week, Kevin Owens would interrupt a performance by Aiden English. Owens says that none of the “unrefined Arkansas hillbillies” are capable of appreciating Aiden’s singing, telling English not to waste his time, convincing Aiden to leave the ring without incident. Owens then turns his attention to the situation from last week, saying that he was allowed to pick the Special Guest Referee for the title match against AJ Styles and he picked Baron Corbin, not Shane McMahon. Owens then shows what happened last week with Shane McMahon taking over the refereeing duties for the match after Baron Corbin handed the referee shirt over to Shane. Owens says that it was one year ago today that he won the Universal Championship and he should be the United States Champion right now but Shane McMahon “screwed” him out of the United States Title twice.

Kevin Owens continues, saying things were much simpler when he was on RAW, claiming that RAW Commissioner Stephanie McMahon would “never abuse her power”. Owens then calls SmackDown LIVE “Shane McMahon’s personal playground” before Owens is interrupted by the man himself, SmackDown LIVE Commissioner Shane McMahon. Shane says that he’s out there to help Kevin Owens, reminding Owens that Owens is the one who picked the referee last week, saying that Baron Corbin was biased towards Owens and Corbin quit halfway through the match so he took over as the referee. The Commissioner then tells Owens that he lost to AJ Styles with Owens shouting that Shane “screwed” him out of the title. Shane continues, saying that the conversation is over and everyone is tired of hearing Kevin Owens “complain” before asking Kevin Owens to leave the ring so Aiden English can have his scheduled match against Kevin Owens’ longtime rival Sami Zayn.

However, moments later, SmackDown LIVE Commissioner Shane McMahon is interviewed backstage and the Commissioner announces that the match between Sami Zayn and Aiden English does not count, stating that the match will be stricken from the record books. A visibly frustrated Shane then says that he’s been informed that Kevin Owens has left the arena and he will be doing the same here shortly.

Backstage, Dasha Fuentes has a very interesting interview with Dolph Ziggler. The visibly frustrated former World Champion says that he’s been around for over ten years with “nothing to show for it” before coming up with a list of suggestions for what he can do to get noticed on SmackDown LIVE, suggesting that, maybe, he should play the guitar like Elias or ride an ATV down to the ring like Stone Cold Steve Austin and grab some cold ones and act like he’s drinking them. Dolph continues, suggesting that maybe he will douse himself in paint like Finn Balor, calling Finn a “charisma vacuum”, before suggesting that he come down to the ring with a beautiful lady. Dolph then suggests that he could become a superhero called “Zigman” before Ziggler says that all his years of dedication and sacrifice have “meant nothing”, saying that, if they want “all flash and no substance” then that’s what they are going to get next week.

As Lana embarks on a quest to try and make Tamina the most dominant force on SmackDown LIVE, Lana would be in the corner of Tamina as the second-generation Superstar would go one-on-one with local competitor Tina Stock. With Lana shouting instructions from ringside, Tamina would blast Tina Stock with a super kick, pinning the local competitor for the win. After the match, Lana would proudly raise the hand of Tamina as Lana calls for cameramen to enter the ring for a photo op with Tamina.

Then it was time for the main event as, before they compete next week to decide the #1 Contender for the WWE Championship, “The King of Strong Style” Shinsuke Nakamura would team up with “The Viper” Randy Orton to face WWE Champion Jinder Mahal, with The Singh Brothers in his corner, and “The Bulgarian Brute” Rusev. In the end, it was Randy Orton taking out Jinder Mahal with a DDT that would allow Shinsuke Nakamura to hit Rusev with the Kinshasa as Nakamura pins “The Bulgarian Brute” to pick up the win for his team. After the match, Shinsuke Nakamura and Randy Orton would celebrate their victory before Orton would spot his opening to surprise Nakamura with the RKO, leaving Nakamura with something to think about before they go one-on-one next week with a future shot at the WWE Championship on the line!