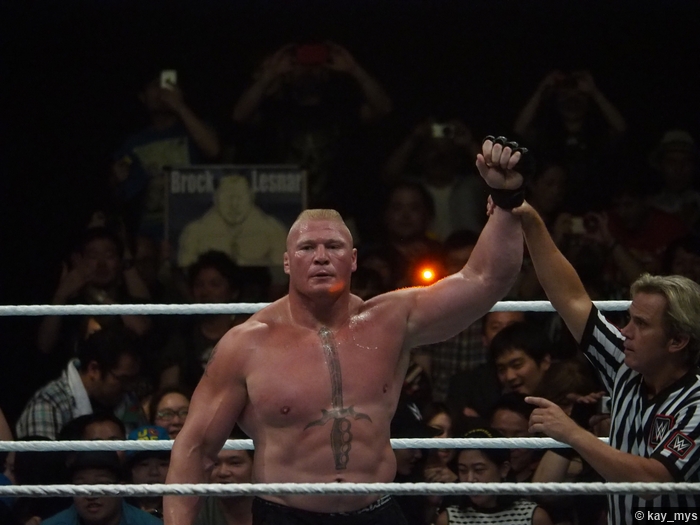 Survival of The Beast.

The inaugural edition of WWE Great Balls of Fire was a RAW exclusive pay-per-view and it came to you, live on the WWE Network, from the American Airlines Center in Dallas, TX. In his storied career, Brock Lesnar has faced a who’s who of legendary talent such as The Rock, John Cena, Triple H, Goldberg, and The Undertaker but perhaps no challenger has been as fearless and savage than Samoa Joe. After winning the Fatal 5-Way Extreme Rules Match at Extreme Rules last month, Samoa Joe punched his ticket to Great Balls of Fire to go one-on-one with “The Beast” for the Universal Championship and “The Destroyer” has set out to prove that he is much more than a stepping stone for Brock Lesnar. However, despite Brock Lesnar as well as his advocate Paul Heyman feeling the wrath of Joe’s Coquina Clutch, Brock remains confident heading into his first defense of the Universal Championship as “The Beast” still seems to be taking Samoa Joe lightly. What will happen when these two unstoppable animals collide at Great Balls of Fire with the Universal Title on the line? Will Brock Lesnar assert his dominance against “The Destroyer” or will Samoa Joe prove that he’s got what it takes to be one of the few men who have slayed “The Beast”?

Perhaps no current feud in WWE is more hard-hitting and ferocious than the one between Roman Reigns and Braun Strowman. Roman thought he rid himself of “The Monster Among Men” over a month ago when a brawl between Reigns and Strowman resulted in Braun undergoing elbow surgery that was supposed to keep Strowman out of action for at least six months. However, Braun’s superhuman strength and desire to destroy Roman Reigns would surprisingly bring Strowman back five months ahead of schedule and “The Monster Among Men” picked up right where he left off, assaulting Roman Reigns and tossing him in an ambulance. In fact, an ambulance has become such an integral part of this rivalry that, at Great Balls of Fire, Roman Reigns would go to war with Braun Strowman in an Ambulance Match, where the only way to win is by throwing your opponent into an ambulance and shutting both doors. Can Roman Reigns put Braun Strowman away once and for all or will “The Monster Among Men” succeed in his quest to completely destroying “The Big Dog”?

Since coming to RAW in the Superstar Shake-Up, Alexa Bliss has taken over the RAW women’s division by almost immediately winning the RAW Women’s Title. However, the self-proclaimed “Goddess of WWE” has found herself the target of every woman in the locker room. Seemingly on an island all by herself, Alexa would watch as a Gauntlet Match would decide her next contender on RAW a couple of weeks ago. Though Nia Jax showed her dominance in the Gauntlet Match by running through four RAW Superstars back-to-back, it would be the crafty and pugnacious Sasha Banks who would break Nia down and make the dominant Superstar tap out to the Bank Statement to earn “The Boss” a RAW Women’s Title match at Great Balls of Fire. Can “The Boss” reclaim her spot atop the RAW women’s division or will Alexa Bliss continue her reign as RAW Women’s Champion?

Also at Great Balls of Fire, two former World Champions would collide in a match that came to be after some comments made by Seth Rollins where Seth referred to Bray Wyatt as a false prophet. Bray would respond by challenging “The Kingslayer” to a match at Great Balls of Fire, vowing to make Seth burn for his “blasphemy”. Never one to turn down a challenge, Seth Rollins would accept and now the stage is set for these two to go one-on-one at Great Balls of Fire. Plus, after RAW General Manager Kurt Angle’s investigation into the recent attacks on Enzo Amore and commentator Corey Graves’ shocking security camera footage revealed that the man who attacked Enzo was none other than his longtime friend and tag team partner Big Cass, this bitter personal rivalry would come to a head at Great Balls of Fire when Enzo Amore goes one-on-one with Big Cass. Can Enzo show his former friend that he’s much more than just a mouthpiece or will Big Cass bring legitimacy to his claims that he’s the true star and that Enzo has been holding him back all these years?