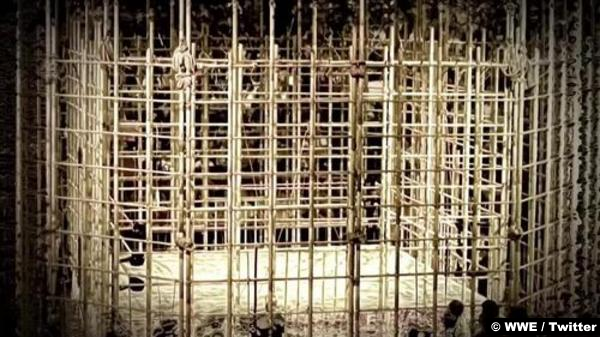 The fifth annual WWE Battleground will be a SmackDown LIVE exclusive pay-per-view and it will come to you, live on the WWE Network, this Sunday night, July 23, at 8/7c from the Wells Fargo Center in Philadelphia, PA. With eight announced matches for the card, including the Punjabi Prison Match for the WWE Championship, as well as a United States Title match and a SmackDown Tag Team Title match, here is the final card for Battleground:

The Battleground Kickoff will air exclusively on the WWE Network an hour before the pay-per-view at 7/6c and will feature the Kickoff Match between Tye Dillinger and Aiden English as well as analysis from the Kickoff Panel featuring Renee Young and WWE Hall of Famer Jerry “The King” Lawler.

The Punjabi Prison Match will see the ring surrounded by two structures made of steel-reinforced bamboo. The smaller of the two structures will be placed around the ring with a much larger structure placed around it. The inner structure (which stands at sixteen feet while the outer structure stands at twenty feet) will have four small doors (four foot by four foot in size) with a referee standing guard at each door. At any time during the match, a competitor can call for a door to be opened. The referee will then open the door for 60 seconds and, at the end of that 60 seconds, the door will be shut and padlocked for the remainder of the match. If all four doors are padlocked, then a competitor must escape the inner structure by climbing out over the top (the outer structure has no doors and must be climbed to escape). In between the inner structure and the other structure will be an assortment of weapons to use. The only way to win the match is by climbing out of both structures with both feet touching the floor. There will be no pinfalls, no submissions, no disqualifications, and no count-outs.

In a Flag Match, each Superstar’s respective country’s flag (the American flag for John Cena and the Bulgarian flag for Rusev in this case) will be positioned above opposing turnbuckles. The first Superstar to successfully retrieve their country’s flag and place their flag in the flag stand on the stage will be declared the winner. The match will have no pinfalls, no submissions, no disqualifications, and no count-outs. This will be the first Flag Match in nearly five years with the last one taking place on January 17, 2012 between Ted DiBiase and Hunico on SmackDown. The last time that a Flag Match was featured on pay-per-view was nearly 20 years ago when Bret Hart and The British Bulldog faced Vader and The Patriot in a tag team Flag Match at WWF Badd Blood: In Your House on October 5, 1997.

In the #1 Contender’s Five-Way Elimination Match, whoever is the last Superstar remaining in the match will win and will earn a match against Naomi for the SmackDown Women’s Title at SummerSlam next month. Elimination can occur by pinfall, submission, disqualification, or count-out.

What do you think of the card for Battleground? Post your comments in the box below.