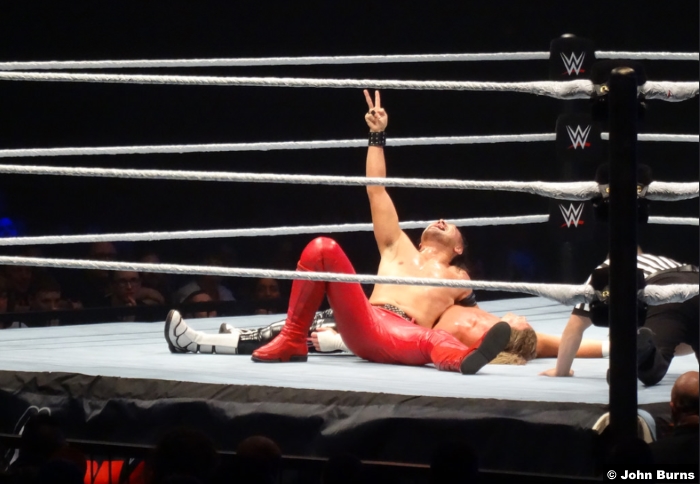 Carmella then points out that, in 2014, Kane helped Seth Rollins win the Money-in-the-Bank briefcase and, in 2015, Bray Wyatt cost Roman Reigns the match and Sheamus ended up winning the briefcase. “Ms. Money-in-the-Bank” then blames the fans for tweeting Daniel Bryan and make Daniel publicly address the controversy surrounding the match. Carmella continues, saying she earned the Money-in-the-Bank contract and you can’t break the rules in a match where there are no rules. Carmella then says that Daniel Bryan is going to have to re-enforce what she has already said and that is that she’s “Ms. Money-in-the-Bank” and there’s not a “damn thing” any of the fans can do about it.

After coming extremely close to win the SmackDown Tag Team Titles at WWE Money-in-the-Bank only for The Usos to abandon the match and take a count-out loss to keep the titles, The New Day would be on SmackDown LIVE as The New Day’s Big E, with Xavier Woods & Kofi Kingston in his corner, would go one-on-one with one-half of the SmackDown Tag Team Champions Jimmy Uso, with Jey Uso in his corner. During the match, things would get too much for Jimmy Uso and The Usos would try to abandon the match like they did at WWE Money-in-the-Bank, but this time, Kofi Kingston would take out Jey Uso while Xavier Woods would keep Jimmy Uso from leaving. Jimmy then re-enters the ring, trying to a super kick but Big E would block the kick before hitting the Big Ending, pinning Jimmy Uso for the win.

Following the WWE Championship match at WWE Money-in-the-Bank in his hometown of St. Louis where he failed to regain the WWE Title from Jinder Mahal, thanks in part to The Singh Brothers, Randy Orton would have a sit-down interview with Tom Phillips. Tom asks about the closing moments of the title match and Randy says that he let his temper get the better of him when he saw The Singh Brothers put their hands on his father, Bob Orton, saying that he beat himself. Orton then says that he knows all about using the numbers game to his advantage, but what he refuses to deal with is anyone disrespecting his family. Orton continues, saying that this is about more than the WWE Championship now, saying that he will do whatever it takes to get his hands on Jinder Mahal, vowing to hurt Jinder and hurt him bad. “The Viper” then threatens to take a trip to India and “rain down RKO’s” on Jinder Mahal’s entire family, saying that Jinder made a mistake and now there’s “no turning back”.

After they both came up short in the Men’s Money-in-the-Bank Ladder Match at WWE Money-in-the-Bank, SmackDown LIVE would see “The Artist Known As” Shinsuke Nakamura go one-on-one with “The Show Off” Dolph Ziggler. In an incredible match, Dolph Ziggler would throw everything he had at Shinsuke Nakamura, including the Famouser and the Zig Zag, but Nakamura would persevere, scoring with the Kinshasa and pinning Dolph to pick up a hard-fought win.

This brings out “The Phenomenal” AJ Styles, who tries to take Kevin Owens up on his challenge but the champion points out that the challenge is only to someone from Dayton. Oddly enough, this brings out American Alpha’s Chad Gable who says that he just moved to Dayton, claiming that he just moved this morning. Gable even gives Owens an address and AJ Styles claims that he knows that address before taking it upon himself to start the match before leaving the ring. Despite the protests of Kevin Owens, the bell would ring and the title match would officially get underway! Despite an impressive performance from Chad Gable, Kevin Owens would emerge victorious, hitting the Pop-Up Powerbomb and pinning Gable to successfully retain the United States Title.

With the world waiting on his decision regarding the controversial ending to the Women’s Money-in-the-Bank Ladder Match, SmackDown LIVE General Manager Daniel Bryan would return to SmackDown LIVE to settle the controversy. The GM says that he’s been holed up with Shane McMahon and WWE officials trying to come to a decision, saying that they told him that he had to take his emotions out of it and “stick strictly to the WWE rulebook”. Daniel then introduces the five women who competed in the Women’s Money-in-the-Bank Ladder Match this past Sunday as Charlotte Flair, Tamina, Natalya, Becky Lynch, and “Ms. Money-in-the-Bank” Carmella, along with James Ellsworth, all make their way to the ring. Daniel says that his decision involves all five of them, admitting that Carmella had some valid points, explaining that there is nothing in the rulebook that says that you can’t have someone else climb the ladder and unhook the briefcase. The GM explains further that the only rule of the match was that the first woman to hold the Money-in-the-Bank briefcase would be the winner of the match. Daniel continues, saying that there has been interference in Money-in-the-Bank Ladder Matches before.

The GM then gets in the face of James Ellsworth, saying that there has never been someone who has climbed the ladder, unhooked the briefcase, and handed it to someone else. Daniel then says that they are in “uncharted territory” before Ellsworth interrupts, saying that fathering a “little vegan hippie baby” has made the GM all “soft”, telling Daniel to “get this over with”! Daniel responds by telling Ellsworth to “shut up”, saying that if Ellsworth ever mentions his baby daughter again, he will punch James so hard in the face that he won’t be able to breath and then he will fire him! Carmella then says that the GM can’t talk to them like that before Becky Lynch jumps in, saying that Carmella “beat no one”. Natalya then tells Becky to “stop sucking up” before saying that Becky is as “pathetic” as James Ellsworth. Charlotte then speaks up, saying that she is there for a decision and, if Natalya doesn’t shut up, she’s going to make Natalya look like James Ellsworth. Tamina then says that Charlotte better be quiet or she’s going to start looking like Ellsworth. Daniel then asks for them to calm down before saying that they competed in a historic match this past Sunday and Carmella gets to make history again right now by being the first Money-in-the-Bank winner to have to hand over the briefcase!

This leaves Carmella in a state of shock and James Ellsworth enraged as Daniel says that he’s not going to let somebody like Ellsworth interrupt the women’s history in WWE. The GM then announces that Carmella is going to hand over the briefcase and, next week, they are going to “relive” that historic moment on SmackDown LIVE! Daniel then says that they are going to have another Women’s Money-in-the-Bank Ladder Match next week and that match will feature Tamina, Carmella, Becky Lynch, Natalya, and Charlotte Flair. The GM then snatches the briefcase out of James Ellsworth’s hands before Daniel leaves the ring. A brawl then breaks out in the ring that quickly comes down to just Charlotte Flair and Becky Lynch against Carmella as Charlotte hits the former “Ms. Money-in-the-Bank” with Natural Selection before Becky locks in the Dis-Arm-Her, making Carmella frantically tap out.

After successfully retaining the WWE Championship against Randy Orton in Orton’s hometown of St. Louis at WWE Money-in-the-Bank, the main event of the evening would see WWE Champion Jinder Mahal, with The Singh Brothers in his corner, go one-on-one with Luke Harper in a non-title match. During the match, with both Jinder Mahal and Luke Harper down, “Mr. Money-in-the-Bank” Baron Corbin would come out to tease a cash-in before heading to the back. This distraction would nearly cost Jinder Mahal the match but a distraction from The Singh Brothers would allow Jinder to counter with a kick to the face. The WWE Champion then follows this up with the Khallas, pinning Luke Harper to pick up the win.

However, while Jinder Mahal would dodge one bullet in Baron Corbin, the champion would be confronted with another as a vengeful Randy Orton would make a beeline for the ring! “The Viper” would first take out The Singh Brothers at ringside before Orton gets his hands on the WWE Champion, taking it to Jinder in the ring before bringing Mahal to the outside. Orton then drops Jinder back-first on the barricade before planting Jinder with his patented DDT on the floor. Back in the ring, “The Viper” would size Jinder up for the RKO but The Singh Brothers would intervene and, while Orton would deliver the RKO to both Singh Brothers, the distraction would give Jinder Mahal his opening to escape as the WWE Champion escapes into the crowd, clutching the WWE Championship as he shows his fear of the angry “Viper”.