When we last left Fargo, Nikki (and by extension, Mr. Wrench) were in a very precarious position. They were trapped in the locked compartment of an overturned prison transport van, which Yuri was busy breaking into at episode’s end. That’s where we return at the beginning of this week’s episode, with a slight rewind to show how an animal mask-clad Yuri and company (Meemo and DJ Qualls again, whose character is called “Golem”) caused the crash. 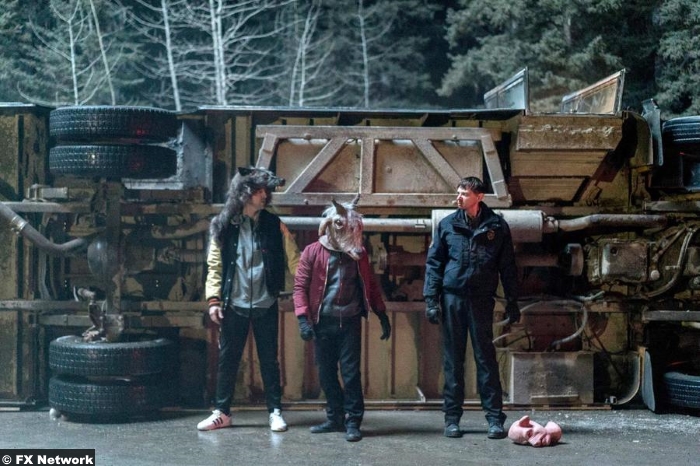 Mr. Wrench, after a brief scuffle with Golem, escapes with Nikki literally in tow—they’re chained together. Nikki is not thrilled to learn that Mr. Wrench is deaf, but they end up working well together. There is a bit of The Defiant Ones vibe as they make their way through the woods, as well as shades of Night of the Hunter. And speaking of references, Fargo gets in one to its namesake, when a poor, doomed couple drives past the wreck and makes eye contact with the trio of killers.

The first part of the episode, the part following Mr. Wrench and Nikki’s run through the woods, is gorgeously shot. The hunt ends in a brutal stand-off behind and around a tree stump, where the pair beheads Golem and seriously wounds Yuri. Nikki and Mr. Wrench make their way to what appears to them (and us) as a bowling alley [yes, a Big Lebowski reference], where Nikki has a conversation with Ray Wise’s Paul Marrane. Of course, we saw him in the Los Angeles-based episode when he met Gloria on the plane and in a bar. 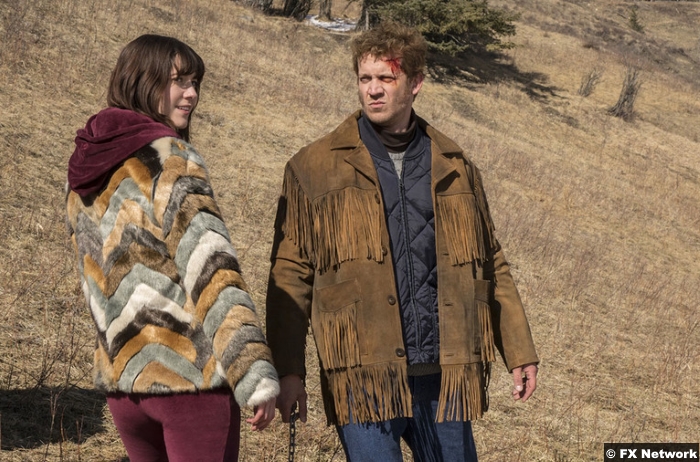 Paul Marrane is the name given to the legendary Wandering Jew in the 17th book Letters Writ by a Turkish Spy. As the story, which began spreading in the 13th century, goes, he mocked Christ on the cross and was cursed to wander the earth until Christ’s return. As Nikki meets him, he seems to be kind of an Anubis-like figure, as he tells Nikki, “We all end up here eventually, to be weighed and judged, as it is now for you and your friend.” So this bowling alley is actually a cosmic waiting room, where souls are taken or returned. Nikki talks with Paul, who introduces her to a kitten named Ray (a callback to the “Peter and the Wolf” opening), and she (and Mr. Wrench, in turn) are given a second chance. Nikki has to deliver a message (from the book of Obadiah) to the “evildoers,” which goes as follows: “Though thou exalt thyself like the eagle; though thou make thy nest among the stars; thence will I bring thee down, saith the Lord.” Who are the evildoers? Well, I can think of a few. 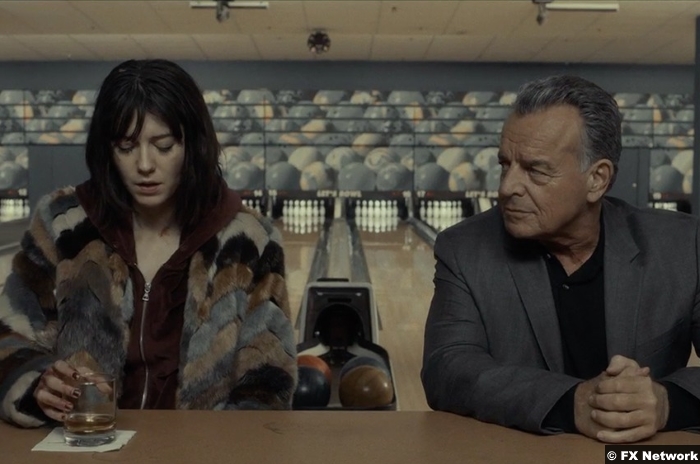 I mentioned last week the idea of the caput lupinum, the English legal phrase that translates to something like “may he wear a wolfish head,” and refers to an outlaw who has become a pariah. I mentioned that in conjunction, of course, with Yuri, who literally wears a wolf’s head. He wanders into the bowling alley soon after, where he is confronted with his crimes, including a throwback to that murder the fake Yuri was accused of in the first episode. It’s not explicitly shown, but I’m guessing he ain’t leaving.

Back in the fully corporeal world, Sy lapses into a coma after he’s poisoned by Varga. We then jump forward a few months until March, when no one’s heard from Nikki or Mr. Wrench since that night in the woods and Emmit’s life really starts to collapse around him. It seems that someone is messing with him and this time, it’s not just Varga and friends. When he leaves the hospital after visiting Sy, his car is missing, and in its place is Ray’s old Corvette. When he catches a cab back to his office, all the art (and I mean ALL the art) in the office has been replaced with prints of that damn stamp. He freaks out, obviously. But he’s not even safe at home. While he’s napping and Meemo is downstairs, someone affixes a fake Ray-style moustache to his face. Varga tries to pacify him with his usual stream of nonsensical story bullshit and has him take a sedative. Why anyone would swallow anything Varga gave them, especially after what happened to Sy, is beyond me, so it’s not a shocker when it turns out that Emmit apparently tongued the pill. It is kinda surprising, though, when he turns up at the police station, where Gloria is now sharing a cramped office with Donny, and says he wants to confess.

9/10 – The second half of the episode was kind of a letdown after the first half, which played like a classic movie. However, the second half did set up an intriguing question, which is who is tormenting Emmit? It seems most likely that it’s Nikki and I can’t to watch her get her vengeance, especially if Gloria is involved. The supernatural stuff may have struck some viewers as odd, but it’s not out of place on Fargo (see season 2’s UFO).