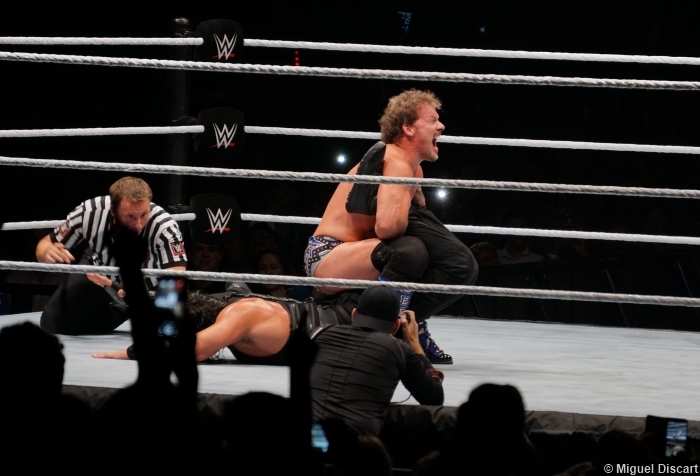 The unique and mysterious House of Horrors Match would then take place at Payback as WWE Champion Randy Orton would walk into the unknown to face Bray Wyatt in the first ever House of Horrors Match, which would be No Holds Barred with the match starting in the House of Horrors but ending in the ring by either pinfall, submission, or forfeiture. A visibly apprehensive Randy Orton would arrive in a limousine, exiting the vehicle and glancing at a house bathed in moonlight before a tractor drives by itself past “The Viper”. Orton then approaches the blue-hued house, looking in the window to see Bray Wyatt standing in a doorway. The WWE Champion then busts into the eerie house with the door shutting behind him. Bray then attacks Orton from behind, tossing “The Viper” into the wall before pummeling Orton and, when Orton gets a shot in on Bray, “The Eater of Worlds” disappears. Orton then wanders the house, briefly getting grabbed by Bray through the wall before the WWE Champion continues through the house, walking into a room filled with dolls hanging from the ceiling.

As Randy Orton inspects one of the dolls, Bray Wyatt attacks again with Orton putting his thumbs in the eyes of “The Eater of Worlds” before Bray regains the advantage only to disappear again. Clutching his left arm, an angry Orton would continue through the house, flipping over a table before glancing into another creepy room. The WWE Champion would then make his way into the kitchen area, spotting Bray charging at him and getting the upper hand, sending Wyatt into the cabinets before beating Bray down. Orton then grabs a pan to use against “The Eater of Worlds”, but Bray would counter with a low blow before Wyatt grabs the refrigerator and tips the entire thing over on top of Orton! Bray then stumbles his way through the house, exiting through the front door and getting on his knees in the front yard. Wyatt then shouts “follow the buzzards” and this casts the house in a red hue before Bray manages to get to his feet, walking to the limo before laughing and getting in the vehicle. Bray then instructs the driver to take him to the arena as Bray sings “He’s got the whole world in his hands” the whole way.

After Samoa Joe nearly ended the career of Seth Rollins a couple of months ago, “The Kingslayer” would be looking for revenge at Payback as Seth Rollins would go one-on-one with “The Destroyer” Samoa Joe. Throughout the match, Samoa Joe would relentlessly target the surgically repaired knee of Seth Rollins, wrenching and tearing at the knee. Somehow, Rollins manages to fight through the pain, even hitting Samoa Joe with the frog splash, but “The Destroyer” kicks out. Joe then goes for the Coquina Clutch with Rollins countering and nearly pinning Joe. Joe then locks in the Coquina Clutch, but Seth counters again and, this time, “The Kingslayer” is able to take Joe over, pinning Samoa Joe for the win, much to the surprise of “The Destroyer”.

Backstage, the limo carrying Bray Wyatt arrives in the arena as “The Eater of Worlds” exits the limo, making his way through the backstage area before painfully stumbling to the ring. However, when the lights come back on in the arena, Randy Orton is somehow standing behind “The Eater of Worlds” with a steel chair in hand! The WWE Champion would deliver a chair shot to the back of Bray Wyatt before bringing Bray to the outside, delivering his suspended DDT to Bray on the floor. “The Viper” then delivers another chair shot to the back of Bray before bringing Wyatt back into the ring. However, just as Orton is about to hit the RKO, the WWE Champion is attacked by the Singh Brothers with “The Viper” managing to fight off the brothers before Orton hits Bray with the RKO. Jinder Mahal then rushes the ring with the WWE Title belt in hand, blasting the WWE Champion in the back of the head with the title belt. Jinder then sizes Orton up before delivering a second shot with the title belt, which would allow Bray Wyatt to catch Orton with Sister Abigail, pinning the WWE Champion to defeat “The Viper” in the first ever House of Horrors Match, thanks to a big assist from Jinder Mahal.

Reigns is then able to catch Strowman with back-to-back Superman Punches, but when Roman goes for another Spear, Braun catches Reigns and locks Roman in a triangle choke, targeting the shoulder of Reigns. Strowman then transitions this into his signature running powerslam, but Roman just barely manages to kick out. However, when “The Monster Among Men” hits a second running powerslam, not even Roman Reigns is able to kick out as Braun Strowman pins Roman Reigns to pick up the win. After the match, Braun was not finished with Roman Reigns as Strowman brings the steel steps into the ring before picking Roman up and dropping “The Big Dog” injured shoulder and ribs first onto the steel steps! Strowman then picks up the steel steps, ramming the steps into the injured ribs of Roman Reigns.

With Roman bleeding from the mouth from internal injuries, “The Monster Among Men” would finally leave the ring as agents and referees rush into the ring to check on Roman Reigns. Roman would insist on trying to walk to the back by himself with agents and referees doing their best to assist Reigns. The EMT’s then arrive on the scene with a stretcher, but Roman refuses medical attention, insisting on walking to the back under his own power. Spitting up blood and struggling to breath, Roman Reigns would stumble to the waiting ambulance to try and collect himself. This is when Braun Strowman would re-appear, charging full-force at Reigns, but Roman is able to move out of the way as Braun breaks the entire door off of the ambulance before crashing into some nearby boxes! “The Monster Among Men” then gets back to his feet and Roman uses the remaining ambulance door as a weapon, repeatedly slamming it on the shoulder of Braun Strowman. This was enough to get Braun Strowman to retreat as Strowman walks away clutching his shoulder as Roman props himself up against the ambulance.

What did you think of Payback? Post your comments in the box below.