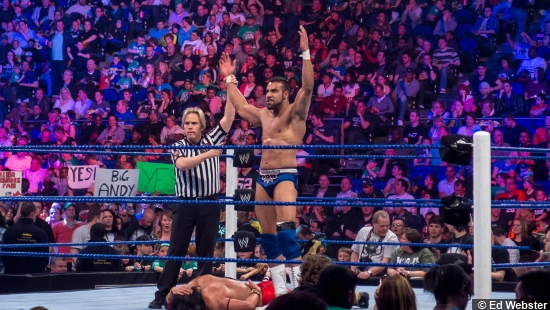 SmackDown LIVE kicks off with one of the new acquisitions from RAW in the Superstar Shake-Up as former four-time RAW Women’s Champion Charlotte Flair makes her way to the ring. Charlotte says that she’s been a part of SmackDown LIVE for seven days and she’s already tired of waiting, asking if Shane McMahon and Daniel Bryan went on Summer vacation early. Charlotte then says that she is the “greatest Superstar” to step foot in the ring, asking how she hasn’t been given a shot at the SmackDown Women’s Title yet, asking what is taking so long. This brings out SmackDown Women’s Champion Naomi, who tells Charlotte that she’s been watching her for a very long time and she hates to see Charlotte out here “begging” like this.

The opening match of the night would decide a new #1 Contender for the WWE Championship as Dolph Ziggler, Erick Rowan, Jinder Mahal, Mojo Rawley, Luke Harper, and Sami Zayn would compete in a Six Pack Challenge where the first Superstar to score a pinfall or submission will earn a shot at the WWE Championship at next month’s Backlash pay-per-view. During the match, Dolph Ziggler would catch Sami Zayn with a super kick as well as Luke Harper, but Harper would respond with a discus clothesline to Dolph. Erick Rowan then takes out Luke Harper before Rowan and Jinder Mahal take each other out. Mojo Rawley then gets back into the ring, taking Jinder out with a shoulder tackle before Sami Zayn sends Mojo out of the ring. Harper then tosses Sami out before taking out Sami, Jinder, and Mojo with back-to-back dives before Dolph tries to a dive of his own, but Ziggler is intercepted by Erick Rowan, who levels Dolph with a big boot, nearly putting Ziggler away. Rowan then uses Dolph to take out the opposition, powerbombing Ziggler to the outside on top of the other four Superstars.

Later on in the match, former tag team partners Luke Harper and Erick Rowan would face-off with Rowan getting the better of Harper before Dolph re-enters the fray with the Zig Zag to Erick Rowan, but Rowan is able to kick out. Harper then plants Dolph with a sit-out powerbomb, but Ziggler is able to kick out. Jinder Mahal then pulls Harper out of the ring, sending Harper into the steel steps before Sami Zayn takes Jinder Mahal out and dives to the outside to take out Harper. Mojo Rawley then takes Erick Rowan out on the outside before Sami is able to take Mojo out. Back in the ring, Sami hits his signature suplex in the corner before sizing Jinder Mahal up for the Helluva Kick. However, this is when two mysterious men show up at ringside, holding onto the legs of Sami Zayn! The actions of these apparent associates of Jinder Mahal would give Jinder the opening he needed as Jinder hits Sami with a Cobra Clutch slam, pinning Sami to pick up the upset victory to earn himself a match against Randy Orton for the WWE Championship at Backlash!

After the match, Jinder Mahal is interviewed about the biggest win of his career, saying that the fans boo him because he’s not the “typical All-American” before saying that Americans do not accept “diversity” but they will have no choice but to accept him as the next WWE Champion. However, this brings out WWE Champion Randy Orton as the champion tells Jinder Mahal that he’s won the lottery but his “prize” won’t be the WWE Title. The champion then says that the only prize that Jinder Mahal has earned is an RKO. Orton then says that, before he puts his hands on Jinder Mahal, he has another “thorn” in his side in the form of Bray Wyatt. Orton then addresses his Payback opponent, saying that he doesn’t know what a House of Horrors Match is, but he will burn it down just like he burnt down the Wyatt compound. Bray Wyatt then appears on the Tron, telling Randy Orton that all of the pain he’s endured has been at Randy’s hands. Bray then says that Orton may walk into the House of Horrors as “The Viper”, but he will “never walk out” before telling the WWE Champion to “run”.

With United States Champion Kevin Owens a guest on commentary, the main event of the evening would see the #1 Contender for the United States Title, AJ Styles, go one-on-one with “The Lone Wolf” Baron Corbin. During the match, AJ Styles would lock in the Calf Crusher on Baron Corbin, but Corbin is able to get to the bottom rope to break the hold before “The Lone Wolf” hits AJ with the Deep Six, but Styles kicks out. The fight then spills to the outside as AJ Styles looks to hit Baron Corbin with the Styles Clash on the floor, but Corbin counters, backdropping “The Phenomenal One” on top of Kevin Owens! Styles then tosses Corbin over the barricade before getting back into the ring just in time to win the match by count-out. After the match, AJ Styles would celebrate his victory as Kevin Owens is left seething at ringside.