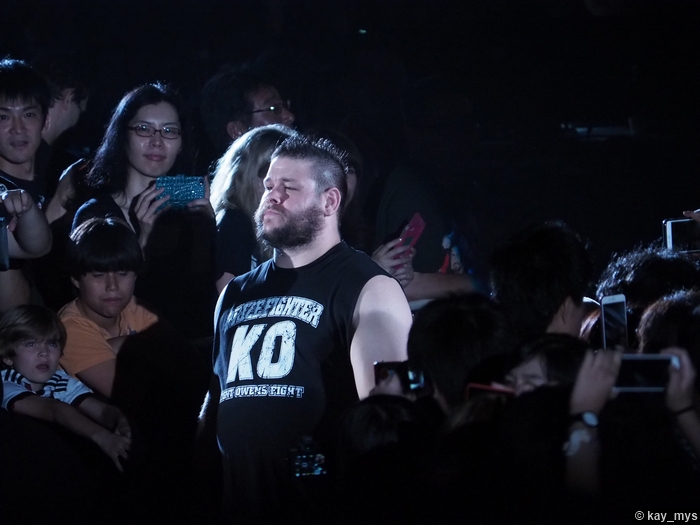 The United States Champion is then confronted by “The Lone Wolf” Baron Corbin as Corbin makes his way to the ring, telling the newest SmackDown LIVE Superstar that he’s sure that Kevin Owens can beat up everyone in attendance and “most” of the Superstars in the locker room. Now in the ring, Corbin says that Owens cannot beat him up before Baron says that, last week, he beat up the Intercontinental Champion so badly that Dean Ambrose went and “hid” on RAW and, last night, Ambrose beat Owens so bad that Owens tucked his tail and “ran to SmackDown”. Corbin continues, saying that, if he beat Ambrose and Ambrose beat Owens, then he should have “no problem” beating Kevin Owens. “The Lone Wolf” then points out that, technically, he is “owed” a championship match seeing as he pinned the Intercontinental Champion last week. Corbin then says that, since Owens is the only one with a championship out there, he is going to have to beat Owens and take his title. Owens disagrees, saying that Baron is “delusional” if he thinks he deserves a shot at his United States Title.

Less than three weeks before he defends the WWE Championship against new RAW Superstar Bray Wyatt in the mysterious House of Horrors Match at Payback, the WWE Champion was in action on SmackDown LIVE as Randy Orton would go one-on-one with Bray Wyatt’s now former follower Erick Rowan in a non-title match. During the match, Randy Orton is just about to hit Erick Rowan with the RKO when the lights go out and RAW’s Bray Wyatt appears on the Tron! Bray says that can he can smell the “stench of fear” on Randy Orton, saying that he will see Orton again very soon in the House of Horrors. “The Eater of Worlds” then laughs maniacally before the lights come back on and Randy Orton decides to turn his attention back to Erick Rowan. However, when the WWE Champion exits the ring, he is blasted with the steel steps by Rowan, ending the match by disqualification. Rowan then rolls Orton back into the ring as Erick plants “The Viper” with a vicious full-nelson slam! Erick Rowan then stands over the fallen WWE Champion, having taken out Randy Orton on behalf of his former leader Bray Wyatt.

In a rematch from a couple of weeks ago, the SmackDown Tag Team Titles were on the line on SmackDown LIVE as The Usos would defend the tag titles against the former champions American Alpha. At the end of a hard-fought match, it was Jey Uso hitting Chad Gable with the Uso Splash, pinning Gable to pick up the win as The Usos successfully retain the SmackDown Tag Team Titles. However, things would go from bad to worse for American Alpha after the match as The Shining Stars would make their abrupt arrival to SmackDown LIVE as Primo & Epico would ambush Jason Jordan on the outside, sending Jordan into the ring post. The Shining Stars would then get into the ring, hitting Chad Gable with a double team Back Stabber, leaving Primo & Epico standing tall as the newest additions to the SmackDown LIVE tag team division.

A rivalry that began in the Andre The Giant Memorial Battle Royal on the WrestleMania Kickoff would be renewed on SmackDown LIVE as the winner of the Andre The Giant Memorial Battle Royal, Mojo Rawley, would go one-on-one with SmackDown LIVE’s newest acquisition Jinder Mahal. During the match, Jinder Mahal would decide to get in the face of Rob Gronkowski at ringside and, much like on the WrestleMania Kickoff, it would end up costing Jinder as Gronkowski would throw his drink in the face of Jinder before Mojo Rawley brings Mahal back into the ring, blasting Jinder with the running forearm, pinning Mahal for the win.

Shane first congratulates Naomi on winning the SmackDown Women’s Title at WrestleMania before Carmella’s boyfriend, James Ellsworth, chimes in, telling the Commissioner that he is “wrong”. Ellsworth then says that Naomi is a terrible champion and the only reason people tune in to SmackDown LIVE is to see Carmella and himself. Naomi then takes the microphone from Ellsworth, telling Carmella that she better get her “side chick” under control before he gets “chin checked”. Naomi then hands the microphone back to Shane McMahon, who announces that the newest arrival to SmackDown LIVE is a second-generation competitor whose father is a WWE Hall of Famer. However, while everyone expected it to be Charlotte Flair, the Commissioner surprises everyone by revealing that he is referring to the returning Tamina! Tamina then makes her way to the ring to chants of “We Want Sasha” and Shane takes notice, saying that the crowd seems to think he was referring to someone else. The Commissioner then reveals that Tamina is not the only new arrival to SmackDown LIVE before Shane brings out former four-time RAW Women’s Champion Charlotte Flair!

Dolph Ziggler then makes an appearance on SmackDown LIVE, saying that he “built” SmackDown LIVE and the Superstar Shake-Up is going to give them a lot of “shiny new toys”, but that will fade and they will be left with him doing what he does better than anyone in this business. Dolph is then interrupted by the familiar sound of a violin playing as the charismatic, awe-inspiring Shinsuke Nakamura makes his way to the ring. Dolph asks who Nakamura thinks he is and Shinsuke responds by introducing himself to Ziggler. Dolph then tries to cheap-shot “The King of Strong Style” but Nakamura catches the foot of Ziggler, shoving Dolph to the mat. However, with Shinsuke ready for a fight, Dolph would opt to leave the ring, refusing to fight Nakamura for the time being.

Then it was time for the main event as a new #1 Contender for the United States Championship would be determined as “The Phenomenal One” AJ Styles, “The Lone Wolf” Baron Corbin, and “The Underdog from the Underground” Sami Zayn would compete in a Triple Threat Match with the winner earning a future shot at the United States Title. During an incredible Triple Threat Match, AJ Styles would hit the springboard 450 Splash on Baron Corbin, but Sami Zayn would break up the pin at the last second. Styles then goes for the Styles Clash on Sami Zayn, but Sami counters before taking Corbin out with the Helluva Kick. AJ then capitalizes by catching Sami Zayn with the Phenomenal Forearm, pinning Sami to pick up the win and become the new #1 Contender for the United States Title, earning a future shot at the title against either Kevin Owens or Chris Jericho!

What did you think of the SmackDown LIVE Superstar Shake-Up? Post your comments in the box below.