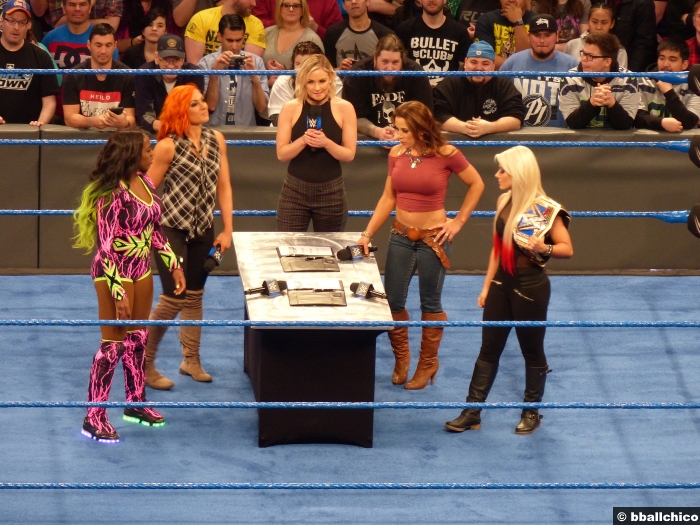 SmackDown LIVE kicks off with SmackDown LIVE General Manager Daniel Bryan making his way to the ring as the GM would mediate the contract signing between AJ Styles and SmackDown LIVE Commissioner Shane McMahon for their match at WrestleMania. After asking the crowd if they’re ready for WrestleMania, Daniel introduces SmackDown LIVE Commissioner Shane McMahon, who makes his way to the ring. The GM then introduces Shane’s opponent this Sunday, “The Phenomenal” AJ Styles, who also makes his way to the ring. Both Shane and AJ take their seats before Shane says that, when he and Daniel Bryan started running SmackDown LIVE last year, they wanted to run a show that provided “opportunities” to their Superstars and they wanted a show where management didn’t push their own agendas. Shane then says that, no matter what happens between them at WrestleMania, he thinks that AJ is “one of the greatest talents” to ever step foot in the ring, saying that Styles is truly “phenomenal”.

AJ agrees that he is phenomenal before Shane continues, saying that he blew the doors off of WWE when he arrived and Styles used the adulation from the crowd to propel AJ Styles to new heights and to winning the WWE Championship. The Commissioner then says that AJ became “arrogant” and it was AJ’s arrogance that cost him the WWE Title and AJ’s “ego” couldn’t handle that he wasn’t a part of WrestleMania. Shane then says that, if Styles doesn’t give him his “A game”, then how “phenomenal” will AJ feel when it’s Shane’s hand being raised in victory at WrestleMania? Shane then signs the contract before sliding the contract over to AJ Styles as AJ reminds the Commissioner that their match at WrestleMania is a traditional match, where there won’t be any tables, ladders, or chairs and staying out of the ring for more than a ten-count means you lose. AJ says that he doesn’t know if Shane has ever been in a match like that before, saying that entering the ring is entering the “world of AJ Styles”.

Styles continues, saying that he is “untouchable” when he’s in the ring, saying that he will “embarrass” Shane on every level come WrestleMania. AJ then says that Shane has been in the ring with a who’s who of Superstars but Shane has never faced the likes of AJ Styles and, at WrestleMania, Shane is going to find out just how “phenomenal” he really is. AJ then signs the contract to make the WrestleMania match official before both AJ and Shane get to their feet, ready to fight. However, Daniel Bryan gets in the middle of the two rivals in an attempt to keep the peace before the GM suggests that they “seal the deal” with a handshake. Shane would stick his hand out for the handshake, but Styles would refuse the handshake, leaving the ring.

Before they are part of the unique match on the WrestleMania Kickoff where Alexa Bliss will defend the SmackDown Women’s Championship against all available women on the SmackDown LIVE roster, the opening match of the night would see “The Irish Lass Kicker” Becky Lynch square off with “The Princess of Staten Island” Carmella, with James Ellsworth in her corner, with Mickie James and SmackDown Women’s Champion Alexa Bliss as guests on commentary. During the match, words would turn to action between Alexa Bliss and Mickie James on the outside. The brawl would end up spilling into the ring and, once Mickie hits Carmella, the match would come to an end before Becky Lynch takes Carmella out with a Becksploder Suplex and Mickie takes out Alexa with the Mick Kick! This leaves Becky Lynch and Mickie James face-to-face in the ring.

The brawl would then be made into a tag team match as Becky Lynch would actually team with her former rival Mickie James to face SmackDown Women’s Champion Alexa Bliss and Carmella, with James Ellsworth in her corner. During the match, Natalya would make her way down to ringside to be a guest on commentary. Later on in the match, Natalya would try to get involved in the match but would get knocked down by Becky Lynch. With the referee’s attention on Natalya, this would allow James Ellsworth to trip Becky Lynch, allowing Carmella to roll Becky up to pick up the win for her team. After the match, another brawl would break out among the women with Mickie James getting tossed out of the ring before all the women get a big surprise with the return of Naomi! Returning from the knee injury that forced her to relinquish the SmackDown Women’s Title, Naomi would single-handedly take out Natalya and Carmella before taking the champion out with the Rear View! Naomi then grabs a microphone, saying that she knew they were wondering if she was going to make it to WrestleMania. Naomi then announces that she is officially going to be a part of the SmackDown Women’s Title match at WrestleMania in her hometown of Orlando! Naomi then concludes by saying that they will all “feel the glow” this Sunday.

Five nights before they face John Cena & Nikki Bella in a Mixed Tag Match at WrestleMania, The Miz & Maryse would be on SmackDown LIVE for Miz TV, showing more of their parody of Total Bellas. The end of the parody would see The Miz & Maryse dropping the act as Maryse would say that the Kids Choice Awards is the closest that Nikki Bella will get to having kids with The Miz adding that, after WrestleMania, the world will know that John Cena’s entire life is “bull****”! Having seen and heard The Miz & Maryse’s production, John Cena & Nikki Bella would make their way to the ring to confront their WrestleMania opponents. Cena says that they have no problem taking a joke but they’ve definitely got a problem with The Miz & Maryse, saying that they believe what they’re saying. Cena then says that the reason Maryse didn’t come back sooner is because WWE didn’t want her back, saying that she wasn’t doing jack before she left. Cena says that he’s the most “brand loyal” guy in WWE before saying that there are several Superstars who have left for a short period of time to film a movie and then came back to WWE.

Cena continues, saying that even The Miz has done this before saying that The Miz just stars in “bootleg” versions of movies that Cena has already done! Cena then says that The Miz is at least doing something, saying that he doesn’t even know what Maryse is doing here. Cena then says that there is a “women’s revolution” going on right now, saying that women are encouraged to enter the ring and prove that they are just as good, if not better, then the men. Cena then points out Nikki Bella hitting Tyler Breeze with the Rack Attack 2.0 last week, saying that Maryse shows up and collects a paycheck every week, calling Maryse a “waste of space”. Cena then alleges that the only reason that Maryse is in WWE right now is because The Miz “begged” WWE to hire her back so that The Miz could be on Total Divas before asking The Miz & Maryse how many kids they’ve got for as long as they’ve been married.

Before they are all a part of the Andre The Giant Memorial Battle Royal on the WrestleMania Kickoff this Sunday, American Alpha would team with Mojo Rawley and Heath Slater & Rhyno to face new SmackDown Tag Team Champions The Usos, Dolph Ziggler, and Breezango in a 10-Man Tag match. At the end of a wild match, it was Mojo Rawley hitting Tyler Breeze with a running forearm in the corner, pinning Breeze to pick up the win for his team.

Then it was time for the main event as, five nights before he defends the WWE Championship against Randy Orton at WrestleMania, WWE Champion Bray Wyatt would go one-on-one with former follower Luke Harper in a non-title match. In the end, Luke Harper would find himself hesitating to finish it against Bray Wyatt and the WWE Champion would take advantage, hitting Sister Abigail and pinning Luke Harper for the win. After the match, Randy Orton would appear on the Tron as “The Viper” would be at the remains of the Wyatt Family compound he burned down several weeks ago. With Bray’s “weapon of apocalypse”, Randy Orton drives the stake into the grave of Sister Abigail, proclaiming that he is coming for Bray Wyatt and the WWE Championship and there is “nothing” that can stand in his way before a snake symbolically strikes at the camera with its fangs exposed in what could prove to be a metaphor for the WWE Title match this Sunday at WrestleMania.

What did you think of the final SmackDown LIVE before WrestleMania? Post your comments in the box below.