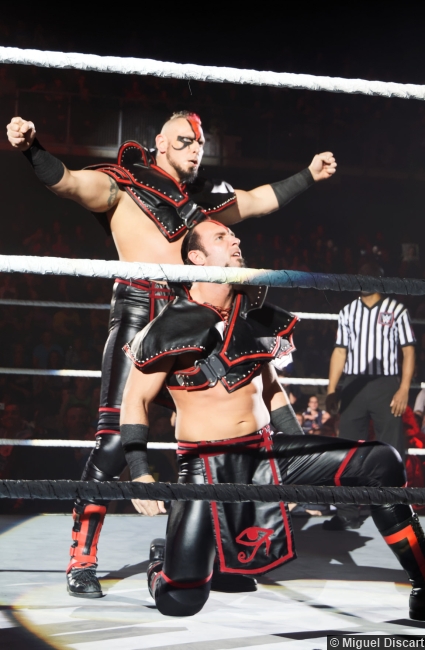 SmackDown LIVE kicks off with Washington native and SmackDown General Manager Daniel Bryan to a thunderous response from his home state crowd. The GM says that the last time that he was in Seattle, he had to make the toughest decision of his life when he announced his retirement from in-ring competition before admitting that this past year has been far from easy. Daniel says that he is “grateful” that he has been able to come out there and be the General Manager of SmackDown LIVE and he is “grateful” that he has been able to try and give them the “best show possible”. The GM continues, saying that he is “grateful” that, very soon, he’s going to be a father. Daniel’s homecoming speech is interrupted by a longtime rival of the GM as The Miz, along with his wife Maryse, makes his way to the ring. Showing no respect for Daniel Bryan in his home state, The Miz tells Daniel that he is more suited to be a “stay at home dad” before saying that he doesn’t know why Daniel is even in a WWE ring. The GM is quick to fire back, telling The Miz that not being able to wrestle hasn’t kept The Miz from stepping foot into a WWE ring!

The Miz then says that Daniel doesn’t “respect” him and, as The Miz struggles to talk over the raucous pro-Daniel Bryan crowd, the confrontation is interrupted by another of the six participants in the WWE Championship Elimination Chamber Match this Sunday night, Baron Corbin. Corbin tells The Miz that he needs to learn to shut up before The Miz says that they should work together inside the Elimination Chamber, but “The Lone Wolf” has a different idea, saying that he could take The Miz out right now so he doesn’t have to hear The Miz’s mouth. Now hiding behind Maryse, The Miz asks Daniel Bryan if he is going to do something about Baron Corbin with the GM jokingly responding by saying, “Oh no, Baron, please don’t punch Miz in the face. That would be terrible.”

The Chamber participants then keep on coming as Intercontinental Champion Dean Ambrose makes his way to the ring, saying that The Miz is dressed “like a shoe”. Ambrose then tells Corbin that he’s “big” and “tough” and he stole the motorcycle sound from his entrance music, but Baron has miles to walk before he’s lived “half” the life that he has. Ambrose continues, saying that he is “right at home” inside the Elimination Chamber and they are going to make some “bad decisions” inside the structure. Ambrose then vows to walk out of WWE Elimination Chamber with both the WWE Title and the Intercontinental Title, adding that, if they’re not careful, they might not walk out of the Chamber at all!

This brings out “The Phenomenal” AJ Styles, who asks if they’re done playing “tickle butt” before asking if they’re living in some sort of “fantasy land” where “facts don’t matter”. Styles then says that, at one point in time, he has beaten The Miz, Baron Corbin, and Dean Ambrose, saying that all he cares about is getting the WWE Title back. The Miz then says that people come to see SmackDown LIVE because of him not because of any of them. Daniel Bryan then steps in as the General Manager announces a Fatal 4-Way Match to take place right now, which sparks a “yes” chant from the Seattle crowd!

Before they, along with Bray Wyatt and WWE Champion John Cena, are locked inside the Elimination Chamber with the WWE Title on the line this Sunday, the opening match of the night would see a Fatal 4-Way Match between “The Phenomenal” AJ Styles, “The Lone Wolf” Baron Corbin, Intercontinental Champion Dean Ambrose, and The Miz, with Maryse in his corner, where the first Superstar to score a pinfall or submission will win the match. During a wild Fatal 4-Way Match, AJ Styles would hit the Phenomenal Forearm on The Miz, but Maryse would pull The Miz out of the ring before Baron Corbin hits Styles with the End of Days, pinning the former WWE Champion to pick up the win.

In an undisclosed location hued in red light backstage, Luke Harper says that they say that a man is most dangerous when he has nothing left to lose, but Harper asks, “what about a man who had nothing to begin with?” Harper then addresses Randy Orton, saying that Orton took his “family” away from him, calling Orton a “liar” and saying that Orton has been a “snake in the grass” for far too long. Harper continues, saying that he wants to “hurt” Randy Orton before saying that, at WWE Elimination Chamber, Randy Orton will be “eliminated”.

In their ongoing rivalry, SmackDown LIVE would see Apollo Crews square off with former friend Dolph Ziggler. During the match, Dolph Ziggler would go for the super kick, but Apollo Crews would block the kick before rolling Dolph up, scoring the three-count to pick up the upset win. In what has become a trend as of late, Dolph would blindside Apollo Crews after the match before grabbing a steel chair, delivering a pair of chair shots to Apollo’s back. Kalisto then comes out with revenge on his mind, kicking the chair into the face of Dolph Ziggler before going for the Salida del Sol. However, Dolph counters, hanging Kalisto up on the top rope before hitting Kalisto with the chair, following it up with another chair shot to Apollo Crews.

Backstage, Dolph Ziggler explains his actions to SmackDown General Manager Daniel Bryan, telling the GM that he could beat both Kalisto and Apollo Crews at the same time if he felt like it. Dolph then says that hitting Kalisto and Crews with a chair is just a “little bit more fun”. Daniel responds by putting Dolph in a 2-on-1 Handicap Match against both Kalisto and Apollo Crews at WWE Elimination Chamber, telling Ziggler to “have fun with that”.

SmackDown LIVE would then be home to a first as the first ever dual contract signing would take place as the SmackDown Women’s Title match between Alexa Bliss and Naomi as well as the one-on-one match between Becky Lynch and Mickie James for WWE Elimination Chamber this Sunday would be made official. SmackDown Women’s Champion Alexa Bliss and Mickie James would make their way to the ring first, followed by Becky Lynch and, finally, the #1 Contender for the SmackDown Women’s Title, Naomi. Mickie James says that she has more “experience” than everyone else in the ring, shooing Renee Young away to handle the dual contract signing herself. Mickie then says that the entire women’s division was built on her “obsession” to be the best, saying that she has been waiting for “seven years” to come back into a WWE ring and get the credit that she deserves. Mickie continues, saying that, this Sunday, she’s going to prove that she not only created this “women’s revolution”, but, without her, there would be no Becky Lynch. Mickie then concludes by saying that the “reinvention of Mickie James” starts with the “destruction of Becky Lynch” before Mickie signs her name to the contract.

Becky Lynch responds by telling Mickie James that she “respected” Mickie until Mickie came back and teamed up with Alexa Bliss to cost her the SmackDown Women’s Title. Becky then tells Mickie that, when it got too tough for Mickie, she “walked away” and then she comes back and expects everyone to “make way” for her and the big chip on her shoulder. Becky continues, saying that, when things get tough, she keeps walking through it and, at WWE Elimination Chamber, she is going to walk right through Mickie James. Becky then tells Mickie that Mickie can bring her “rage” this Sunday because she will be bringing her “straight fire” and she’s going to slap Mickie “back into the past” before Becky signs the contract to make her match with Mickie official.

The champion then speaks up as Alexa Bliss tells Becky Lynch to “show some respect” for Mickie James before saying that the only factor that matters is that, as long as she is the champion, then this is her division. Alexa then signs her part of the contract before dismissively saying that she forgot about Naomi, saying that she’ll beat Naomi this Sunday. Naomi responds by saying that, since Alexa’s memory is so bad, she should remind Alexa that WrestleMania is a couple of months away and, this year, WrestleMania is in her hometown of Orlando and there is no way that she is going to let anyone take her dream away of sliding down the ramp at WrestleMania as SmackDown Women’s Champion. Naomi then concludes by saying that Alexa had “better get ready to feel the glow”, signing the contract before blasting Alexa with a kick to the head. This sparks a brawl between the respective rivals with Naomi and Becky Lynch getting the better of the fight. Naomi then dives to the outside, taking out both Alexa and Mickie before the champion and her new ally make a quick retreat.

With American Alpha set to defend the SmackDown Tag Team Titles in a Tag Team Turmoil Match this Sunday at WWE Elimination Chamber, SmackDown LIVE would play host to a huge 12-Man Tag Match as SmackDown Tag Team Champions American Alpha would team with Breezango and Heath Slater & Rhyno to face the team of The Usos, The Ascension, and The Vaudevillains. At the end of a chaotic match, it was Rhyno blasting Konnor with the Gore before Viktor is able to hit a flying knee off of the second rope, pinning Rhyno to pick up the win for his team.

Then it was time for a main event that could serve as a prelude to the WWE Championship match at WrestleMania as a longtime rivalry would be renewed as WWE Champion John Cena would go one-on-one with “The Viper” Randy Orton, with Bray Wyatt seated in his rocking chair at ringside, in a non-title match. During the match, John Cena would fail to put Randy Orton away with the Attitude Adjustment before “The Viper” fires back, spiking the WWE Champion with a DDT off of the top rope. Orton then delivers the RKO to Cena, but Cena is able to kick out! Cena would then go for a second Attitude Adjustment, but this would result in the referee being inadvertently knocked down. The champion then locks in the STF, making Orton tap out, but the referee was still down on the outside so the match would continue.

With the referee down, Bray Wyatt would get involved in the match as Wyatt and Orton would double-team Cena, beating down the WWE Champion. Bray then tries to send Cena into the RKO, but Cena counters, hitting Orton with a clothesline before walking right into Sister Abigail from Bray Wyatt! With Bray alone in the ring, former Wyatt Family member Luke Harper rushes to the ring, coming face-to-face with his former leader. Bray would try to tell Luke Harper to leave, but Harper would not obey as Luke levels Bray with the Discus Clothesline! Randy Orton then looks for the RKO to Luke Harper, but Harper dodges the RKO before John Cena grabs Orton, hitting “The Viper” with the Attitude Adjustment and pinning Orton to pick up the win as Luke Harper watches from ringside! Cena then celebrates by holding the WWE Title belt high as “The Champ” shows that he is ready for chaos and carnage inside the Elimination Chamber this Sunday.