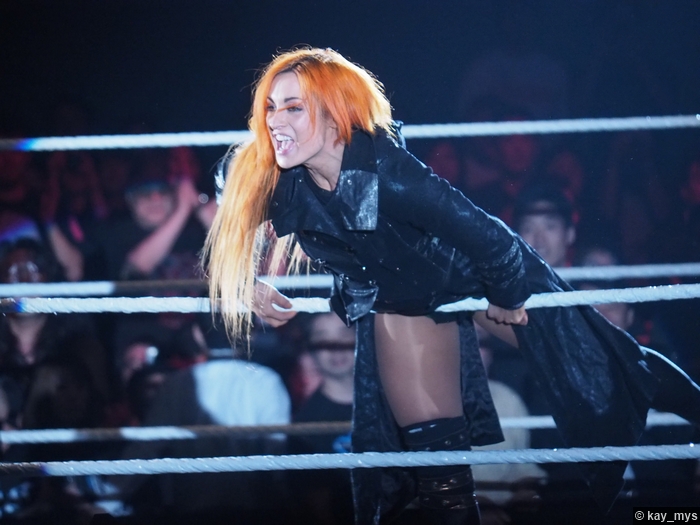 After James Ellsworth cost him a non-title match against Dean Ambrose last week, making Ambrose the new #1 Contender for the WWE World Title with a TLC Match for the title at next month’s WWE TLC pay-per-view, SmackDown LIVE kicks off with WWE World Champion AJ Styles. The champion says that, last week, Dean Ambrose “cheated” and now Ambrose has a shot at the WWE World Title at WWE TLC. Styles then says that, if Ambrose cared so much about the title, he never would have lost it before saying James Ellsworth is an “embarrassment” to sports entertainment. AJ continues, saying that he would beat the “ugly” off of James Ellsworth but nobody is bothering to fly Ellsworth to Scotland. The champion then reveals that he’s been informed by SmackDown LIVE management that he’s not supposed to have any physical contact with Dean Ambrose since they are on the same team at Survivor Series. Styles says that he doesn’t need Ambrose on Team SmackDown LIVE, but admits that he does want to beat up Team RAW. AJ then says that he is the “captain” of Team SmackDown LIVE and, as the captain, it’s his duty to get his team on the same page, saying he is going to bring the rest of Team SmackDown LIVE out there.

However, before AJ Styles can introduce his teammates, he is interrupted by one of them as “The Lone Wolf” Baron Corbin makes his way to the ring. Styles tells Corbin that he can do whatever he wants as long as Corbin delivers come Survivor Series. Baron says that he will deliver, but not for AJ’s team before The Wyatt Family appears at ringside. Bray Wyatt, Luke Harper, & Randy Orton then get on the ring apron, staring down AJ Styles as AJ welcomes them to “Team Styles”. The final member of Team SmackDown LIVE then comes out as Dean Ambrose makes his way to ring, but not before bringing James Ellsworth out with him! Ambrose says that Ellsworth has never been to Scotland before. Styles then tells Ambrose to keep Ellsworth out of his ring before Ambrose says that, if AJ wants to get to Ellsworth, then AJ is going to have to go through him. The champion then says that they may be on the same team at Survivor Series, but right now, Ambrose is “outnumbered”. However, AJ would not have as many allies as he thought as Baron Corbin is quick to exit the ring, abandoning his team.

Backstage, Shane McMahon confronts Baron Corbin as Corbin says that he’s “not interested” in the 6-Man Tag match tonight. Baron says that he’s not going to stick his neck out for Dean Ambrose or James Ellsworth, saying that he already agreed to do Shane’s “dirty work” at Survivor Series. Corbin then says that, if Shane has a problem with it, then Shane can kick him off of the team before saying that Shane needs him more than he needs Shane. The Commissioner then has a different proposition for “The Lone Wolf”, taking Corbin out of the 6-Man Tag match and putting Corbin against a familiar rival in the returning Kalisto.

Sporting kilts and cop attires as SmackDown LIVE’s resident “fashion police”, Breezango would face The Vaudevillains with the winning team being the final team to join Team SmackDown LIVE in the Tag Team 10-on-10 Survivor Series Elimination Tag Match. In the end, it was Fandango hitting Aiden English with the Falcon Arrow, pinning English for the win as Breezango join Heath Slater & Rhyno, The Hype Bros, American Alpha, & The Usos on Team SmackDown LIVE at Survivor Series.

With team captain Nikki Bella a guest on commentary, Team SmackDown LIVE member Naomi would go one-on-one with the coach of Team SmackDown LIVE Natalya. During the match, Carmella would come out to ringside, leading to an argument between Carmella and Nikki Bella. However, Natalya would get in between Nikki and Carmella, trying to do her job as the coach, but Nikki shoves Natalya out of the way before blasting Carmella with a forearm to the face! Natalya then just barely gets back into the ring before the ten-count, but Naomi is quick to roll Natalya up to score the three-count.

After opting not to be a team player in the 6-Man Tag match, Baron Corbin would instead face a man that he repeatedly assaulted backstage a few months ago in the returning Kalisto. However, Baron Corbin would not let the match begin as “The Lone Wolf” would attack Kalisto before the bell can ring, tossing Kalisto around the ring before sending the high-flyer out of the ring. Corbin then exits the ring, but slips off of the ring apron, apparently hurting his knee and this is when Kalisto would spot his chance for some revenge, dropkicking the hurt knee of Baron Corbin into the steel steps. The referee would do his best to keep Kalisto away from Baron Corbin, but Kalisto was determined for some payback as Kalisto would climb to the top rope, delivering a splash to the injured knee of Baron Corbin. Kalisto then exits the ring as referees check on Baron Corbin in the ring.

Backstage, SmackDown General Manager Daniel Bryan confronts SmackDown Commissioner Shane McMahon with the news that, due to his knee injury, Baron Corbin will be unable to compete at Survivor Series. The Commissioner responds by handing the GM a list of SmackDown LIVE Superstars who he sees as suitable replacements for Baron Corbin.

In a match two months in the making, the SmackDown Women’s Championship would be on the line on SmackDown LIVE as Becky Lynch would make her first defense of the SmackDown Women’s Title against Alexa Bliss. Early on in the match, Alexa Bliss would target the left arm of Becky Lynch, but the champion would repeatedly fight back. In the end, Becky would lock in the Dis-Arm-Her on Alexa Bliss and, while Alexa would tap out, Alexa’s foot was on the bottom rope. However, this would go unseen by the referee as the referee calls for the bell, awarding the match to Becky Lynch by submission as Becky retains under controversial circumstances.

Then it was time for the main event as Team SmackDown LIVE would face off against each other in 6-Man Tag action as “The Lunatic Fringe” Dean Ambrose would team with Team SmackDown LIVE’s mascot James Ellsworth and, replacing Baron Corbin, “The Big Red Machine” Kane to face The New Wyatt Family with self-proclaimed team captain and WWE World Champion AJ Styles a guest on commentary. During the match, Kane and Luke Harper would battle their way to the back as, in the ring, Dean Ambrose and Bray Wyatt would take each other down. This would leave James Ellsworth as the only hope for his team and Ellsworth would decide to tag himself into the match! Ellsworth sizes Bray Wyatt up for No Chin Music, but the attempt was easily blocked as Bray hits Ellsworth with Sister Abigail, pinning Ellsworth to pick up the win for The New Wyatt Family. After the match, Dean Ambrose would check on James Ellsworth but “The Lunatic Fringe” would soon find himself in a three-on-one situation against Bray Wyatt, Randy Orton, and AJ Styles.