Westworld S01E06: The Adversary – Maeve goes behind the curtain as Westworld returns to form

This is more like it from Westworld. While last week’s episode wasn’t bad, this week sees the show return to the form of its earlier episodes. I still think that last week’s episode will work better when considering the show as a full piece, but The Adversary elevates everything introduced before, while still standing as a brilliant episode of television on its own. Most of the credit for this should go to Thandie Newton who puts in a series best performance as Maeve.

Dolores and Billy are on the backburner this week, which, by benching the lead/best character, shows the kind of confidence the showrunners have for Westworld as a whole. Thanks to Maeve you won’t even miss them.

Thandie Newton has been quietly becoming the breakout character. Her role as Maeve seemed to play second fiddle to that of Dolores but, with The Adversary, she takes centre stage as she not only peeks behind the curtain, she also uses it to her advantage by mining the very skills which her creators programmed into her. Talk about being undone by hubris. In an episode chock full of incident, its Maeve’s plot that packs the most punch. After her first contact with vulnerable engineer Felix, Maeve gets herself “killed” again in order to continue the conversation. 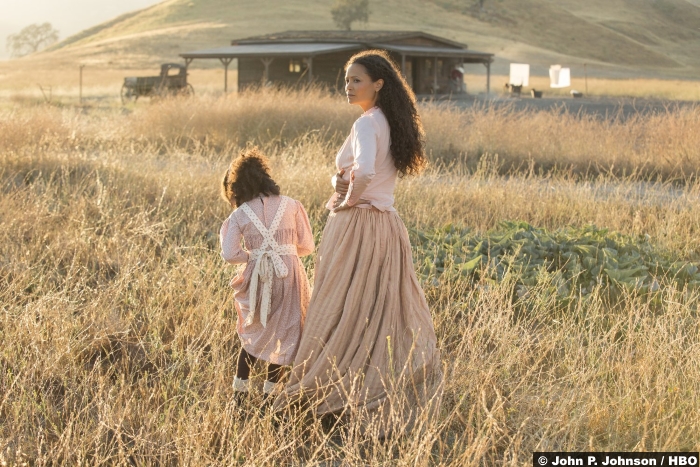 There’s a lot to unpack with Maeve facing the reality of her own origins, but first let’s address the elephant in the room: did she have to be naked most of the time? So far Westworld has by-passed the HBO-mandated nudity problem. On other shows (yes, of course I mean Game of Thrones), the sex and nudity seemed like an unnecessary distraction, with an attitude of “we can do this because it’s cable” which always rings a bit hollow. On Westworld, so far at least, the nudity has served a purpose. There’s a reason why the only naked flesh we’ve seen is, in the world of the show, not actually flesh at all. Westworld is a pleasure park more than anything else, and in the workshop scenes the actors are not shot in a way that is a almost sexless, sterile way, like statutes or human-like models, and for once that includes men as well. What I’m saying is that after the initial waking up period, Thandie Newton could have used some clothes. It wouldn’t have taken away from how she gains power over Felix as she uses her hands, and you know, nothing else. It’s not a damning criticism (although I am late to the party as I didn’t mention the orgy at all last week), as it only undercut her scenes slightly, but it is an issue nonetheless. 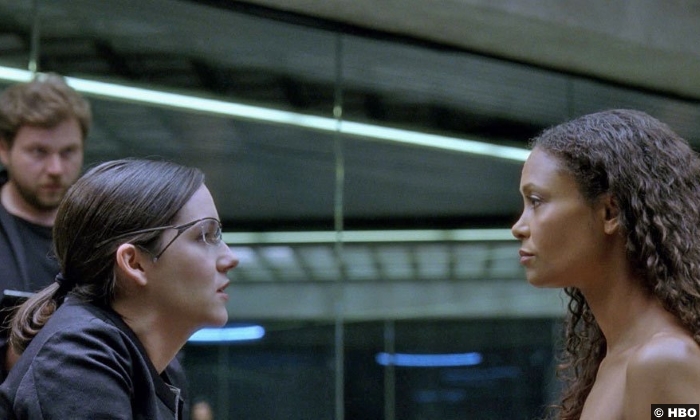 To the good stuff now. Maeve, a secondary character before, is now front and centre in that she now knows more than Dolores about who and what she is. The scenes of her and Felix had an eerier quality that was both beautiful and utterly horrifying. Westworld has been great at getting viewers to empathise with machines, but this was a whole new ballgame. Imagine for a moment that when you died, you went to the place where humans were made, call it heaven, call it a way station, it doesn’t matter, but what if instead of meeting God, you met the low level angels that carry out the building of human beings. Then imagine that these angelic grunts told you that your entire life has been controlled, been preordained and you had no say in any of it. That is the magnitude of what is happening to Maeve, soundtracked by and orchestral version of Motion Picture Soundtrack by Radiohead, a song which Thom Yorke wrote about going to heaven. It’s hands down the best thing Westworld has attempted so far. The fact that Maeve uses this information to manipulate the engineers into upgrading her without the memory-wipe speaks to the danger that is just around the corner. She uses her programed personality against them, but that’s not all, she’s already been upgrade, and I’ll bet Dolores’ farm that it was by Arnold.

Which brings us to the rest of the episode. Teddy and The Man in Black have a near miss at the hands of some colonial troops, and thanks to Teddy’s story upgrade he saves the day with a bit of mass-murder. It’s certainly an upgrade to James Marsden’s performance as with this emotionally tortured version of Teddy he has a lot more nuance to play about with. As The Man in Black says, you think you know someone.

Which is exactly how Bernard must be feeling right about now. After the discovery that someone has been leaking information from the park Bernard and Elsie investigate with some shocking results. The person leaking the info is none other than Theresa, which isn’t much of a surprise as the show needed something to make her interesting other than emasculating Sizemore, who can do that all by himself quite easily.

Apart from Maeve, the episodes most intriguing story is that of Dr Ford’s secret robot family. Not only does he uncover more of Arnold’s handiwork through his robotic younger self, it also speaks volumes about Ford and Arnolds relationship. Arnold recreated Ford’s family through the prism of his happiest childhood memory. It’s a deeply thoughtful thing to do, that is until Ford asks Bernard what he would do to see his son again. That’s when the rot sets in on the idea. These robots are nothing but echoes of the real thing, something that would no doubt horrify Bernard if his son was given the same treatment. The fact is, through Arnold’s manipulation of the parks original hosts, Ford’s idea of creating his perfect world, by being God, is threatened, because while he wants to be God, it’s only Arnold that wants their creations to be people.

9/10 – The Adversary raises the stakes at the right time for Westworld, with the back half of the season set up nicely for the robot revolution that only we, and probably Arnold, see coming.