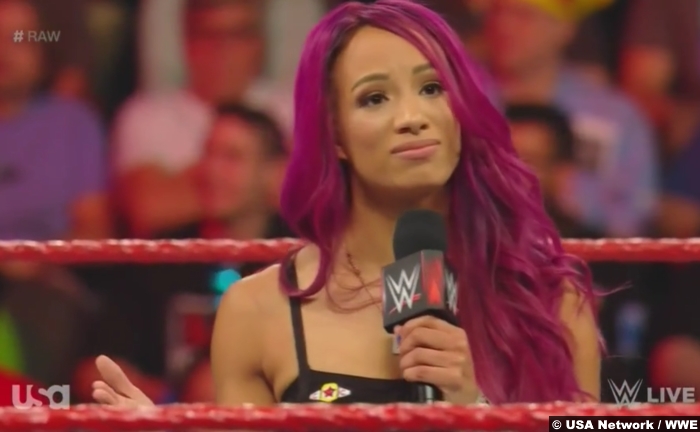 After a hard-fought and emotional victory over Charlotte on last week’s RAW to become the new RAW Women’s Champion for the second time in her career, RAW kicks off with the new queen of the Women’s Division, Sasha Banks. Sasha says that it wasn’t that long ago that she was sitting in the crowd watching WWE and she was just a “little boss” watching her hero, Eddie Guerrero, “lie, cheat, and steal our hearts” and she said she wanted to be just like that. The new champion then says that she would watch Superstars like Trish Stratus and Lita and say that she wanted to be just like that and, last week, her dreams came true when she faced Charlotte in the main event of RAW.

“The Boss” continues, saying she “stole the show” and became a two-time RAW Women’s Champion before saying that her title win is for all the women out there and all the little girls who are watching her right now who want to be like her, telling them to “go get it”. Sasha then says that the Women’s Revolution is on a roll and its next stop is WWE Hell in a Cell where she will defend the RAW Women’s Title against Charlotte. However, the champion then drops a bombshell by challenging Charlotte to have the title match inside Hell in a Cell!

This would bring out former champion Charlotte, but as Charlotte makes her way down the ramp, she is interrupted by “The Bulgarian Brute” Rusev and his wife Lana, who make their way to the ring, followed shortly by Charlotte. Rusev says that nobody cares about their Women’s Revolution and nobody cares about them main eventing RAW last week because he is the “main event” wherever he goes. Charlotte then snatches the microphone away from Rusev, screaming at Rusev, “who in the hell do you think you are?” before addressing Sasha Banks, accepting Sasha’s challenge to make their title match a Hell in a Cell match! Rusev then takes the microphone back, saying that this is his ring and whatever he says goes. Sasha then takes the microphone away from “The Bulgarian Brute”, throwing the microphone down.

Just under three weeks before they challenge The New Day for the RAW Tag Team Titles at WWE Hell in a Cell, the dysfunctional tag team of Cesaro & Sheamus would be on RAW as “The Swiss Superman” Cesaro, with Sheamus doing an interview on Facebook Live on the outside during the match, would go one-on-one with RAW Tag Team Champion Kofi Kingston, with Big E & Xavier Woods in his corner. During the match, Big E & Xavier Woods get the attention of Sheamus on the outside as “The Celtic Warrior” would shove Xavier down before Big E takes out Sheamus. Distracted by the proceedings on the outside, Cesaro would be caught off-guard with a roll-up by Kofi Kingston as Kofi picks up the win. After the match, Cesaro and Sheamus would get in each other’s face before Sheamus storms out of the ring.

In an interview done last Wednesday on ESPN’s Sportscenter, two-time former World Champion Goldberg would be asked who he would want to face if he were to return to the ring. Goldberg said that there is a long list of people he would want to face, saying that the one man at the top of that list is Brock Lesnar. Goldberg says that he doesn’t “owe” Brock a rematch since he beat Brock in their first and only match against each other at WrestleMania XX in 2004 but if he had to return for another match, that would be the one he would want, saying “I’d have to train my ass off”. Goldberg continues, saying that Brock is like a “super human alien guy”, commenting that he beat Lesnar before.

The fun-loving Bayley was in action on RAW as Bayley would go one-on-one with local competitor Cami Fields. In the end, it was Bayley scoring with the Bayley-to-Belly, pinning Cami Fields to pick up the win. After the match, Bayley would celebrate her win on the stage, but Bayley would be blindsided by the woman she attacked backstage last week, Dana Brooke as Dana leaves Bayley laid out on the stage.

RAW Commissioner Stephanie McMahon and RAW General Manager Mick Foley would appear on RAW as Foley was expected to make a big announcement regarding WWE Hell in a Cell. A man very familiar with the Hell in a Cell structure, Mick Foley brings up the confrontation between Sasha Banks and Charlotte earlier in the night where both women expressed their interest in having their title match inside Hell in a Cell. The GM says that Sasha and Charlotte don’t get what they want simply because they ask for it, they get what they want because it’s what they “deserve”.

After hearing this news, WWE Universal Champion Kevin Owens and his best friend Chris Jericho make their way down to the ring as the champion says that he doesn’t want to step foot inside Hell in a Cell because he wants to have a nice, long career and not end up a “washed up General Manager” like Mick Foley. Owens then says that he is “better than that” and he is the WWE Universal Champion. Jericho then says that Foley is just granting requests like a “genie” before saying that Foley hasn’t liked him since the moment they met and the GM is taking it out on his best friend Kevin Owens. Foley argues that he got Jericho his job in ECW before saying that Foley is putting Owens in the match that ended Foley’s career before saying that, because Foley put his best friend in a Hell in a Cell match, Foley is going on the List of Jericho! Putting Foley on the list again, Jericho tells Stephanie to “take care” of the General Manager.

However, the Commissioner says that Jericho needs to show Foley some “respect” and she doesn’t care what list she’s on. Stephanie then says that they listened to Seth Rollins’ grievance when Rollins expressed wanting to get revenge against not only Kevin Owens, but Chris Jericho as well. The Commissioner continues, saying that they think they can do better than the Triple Threat Match for the WWE World Championship that SmackDown LIVE put on at No Mercy. Stephanie then makes the announcement that, in the match between Seth Rollins and Chris Jericho tonight, if Jericho wins, he will be added to the Hell in a Cell match for the WWE Universal Championship at WWE Hell in a Cell, making it a Triple Threat Hell in a Cell match for the title!

With their scheduled match against Enzo & Big Cass no longer taking place, Bo Dallas & Curtis Axel were still in the ring as Axel says that they were promised a tag team match and they’re not leaving until they get it. Curtis then says that he wants to show that he still “believes in Bo”, demanding that Mick Foley send out two other guys for them to face. This brings out Sami Zayn, who is followed by his tag team partner “The Man That Gravity Forgot” Neville as the impromptu tag match would get underway. In the end, it was Sami Zayn catching Curtis Axel with the Helluva Kick before tagging in Neville, who follows up with the Red Arrow, pinning Axel to pick up the win for his team.

As Titus O’Neil continues to try and build his own Titus O’Neil brand, Titus would go one-on-one with R-Truth, with Goldust in his corner, on RAW. During the match, Goldust would distract Titus O’Neil long enough for R-Truth to take advantage, rolling Titus up to pick up the win.

Backstage, Cruiserweight Champion T.J. Perkins confronts Brian Kendrick, saying that he knows who the real Brian Kendrick is, reminiscing about a time when Kendrick would drive TJP to wrestling shows. The champion then shakes Brian’s hand before Kendrick would try to take a cheap shot at Perkins, but T.J. would see it coming, laying Kendrick out with a right hand! TJP then tells Kendrick, “I guess I was wrong” before leaving.

After demanding tougher competition last week, Braun Strowman would seemingly get his wish on RAW as the dominant powerhouse would face two opponents in a 2-on-1 Handicap Match against local competitors The Splash Brothers, Steven Splash & Clay Splash. In the end, it was Braun Strowman hitting a running powerslam on Clay Splash before slamming Steven Splash on top of Clay, pinning Clay Splash for another dominant victory. After the match, Braun Strowman addresses Mick Foley, saying that he asked for “real competition” and he doesn’t care if Foley sends out 20 guys like this because they will all end up in a pile. Braun then again tells the GM to get him some real competition next week or what happens will be on Foley.

In a rare Mixed Tag Match on RAW, four of the Superstars who will step inside Hell in a Cell in their respective matches at WWE Hell in a Cell would face off on RAW as “The Bulgarian Brute” Rusev, with Lana in his corner, would join forces with Charlotte to face the team of United States Champion Roman Reigns and new RAW Women’s Champion Sasha Banks. In the end, it was Sasha Banks locking in the Bank Statement on Charlotte and, as Roman Reigns takes Rusev out with the Spear, Charlotte taps out as the champions pick up the win.

With #1 Contender Brian Kendrick a guest on commentary, Cruiserweight Champion T.J. Perkins would go one-on-one with Ariya Daivari in a non-title match. In the end, it was T.J. Perkins locking in the knee bar, making Ariya Daivari tap out to pick up the win.

Then, with the referee’s attention on Chris Jericho, Kevin Owens would blast Rollins with a super kick, but Rollins was able to kick out. Rollins then battles back, sending Jericho to the outside before Seth dives out of the ring, opting to take out Owens. Shortly after this, Rollins would miss the frog splash and Jericho would take advantage, hitting Seth with the Lionsault, but Rollins would kick out again. With Jericho perched on the top rope, Jericho would fight off Rollins before diving at Seth, but Rollins would counter, looking for the Pedigree. Both men would then go counter-for-counter with Rollins ultimately trapping Jericho in a roll-up, scoring the three-count to pick up the win as Seth ensures that the Hell in a Cell match for the WWE Universal Title remains a one-on-one match.

After the match, Kevin Owens would ambush Rollins before Rollins fights back, looking for the Pedigree on the WWE Universal Champion. However, Chris Jericho would intervene and, for the second week in a row, Owens would stand on the ramp, watching as Seth Rollins plants Jericho with the Pedigree in the middle of the ring. Rollins then stares down the champion, daring Kevin Owens to come back into the ring.